A group of Yale University graduate students announced Tuesday evening that they would be undertaking a hunger strike to pressure the administration into granting them better union benefits. The strike is taking place in front of University President Peter Salovey’s home.

"Yale wants to make us wait and wait and wait … until we give up and go away," the eight members of the graduate student union Local 33 announced. "We have committed ourselves to waiting without eating."

Yale doctoral students currently earn a stipend $30,000 a year, receive free health care, and have their $40,000 tuition paid in full, according to Yale News.  The university administration said in a statement that they understood the students concerns, but "strongly [urge] that students not put their health at risk or encourage others to do so." 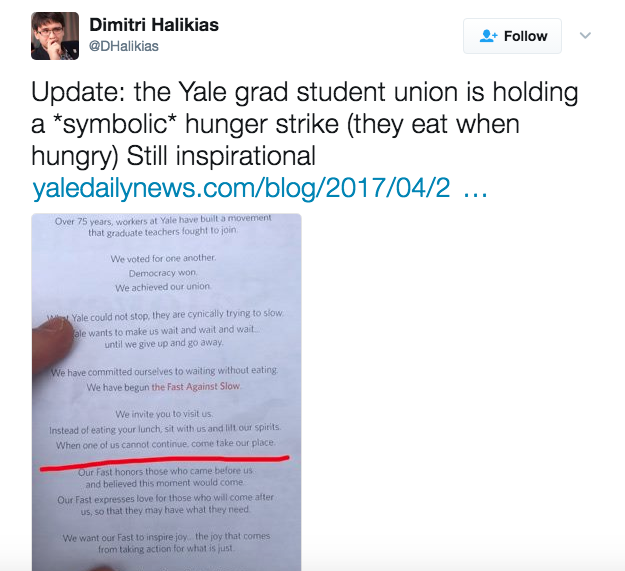 Halikias later protected his account, but by then the tweet had spread and others on social media mocked the "sacrifice" of the Yale grad students.

Reminds me of when the progressive group at my undergrad held a "sleep out" for the homeless night — but moved inside when it rained. https://t.co/tWDmwOYDc4

I'm a vegetarian. But I also eat chicken, beef, and pork. https://t.co/8vOHbddK1y

Local 33 posted a video about the strike on their Facebook page, including quotes endorsing their fast from co-founder of the National Farm Workers Association Dolores Huerta and vice chair of the Democratic National Committee Maria Elena Durazo.