How bourbon went from bust to boom

Let me preface that I didn't write about whiskey in order to get a free bottle of whiskey. Although I tried. Russell's Reserve 13 Year Old Bourbon is, according to the press release, "one of the boldest, yet smooth, limited-edition bourbons ever." Ever! Alas, a publicist informs me there were only a few bottles available for sampling, all of them gone. And I'm not about to expense a $70 bottle of booze. Although I tried.

Last year Americans went through 28.4 million cases of American whiskey—more than 67 million gallons based on data from the Distilled Spirits Council. That's up from 26.6 million cases in 2019 and nearly double what we consumed 10 years ago.

Revenue is also soaring—a record-breaking $4.3 billion in 2020—driven in large part by our thirst for super-premium brands. Amid a pandemic, our spending on high-end bottles like Russell's Reserve increased 132 percent from the previous year.

It's a far cry from the 1980s, or what folks in the industry call the Bourbon Depression. As demand shifted to clear spirits like vodka, whiskey distillers were left with a glut that led to widespread closures and layoffs. Kentucky—America's bourbon* capital—was particularly hit hard.

To get a sense of this dramatic turnaround, I spoke to the man who presides over Russell's Reserve, master distiller Eddie Russell. Keep in mind this particular bourbon is named after his father, the legendary "buddha of bourbon" Jimmy Russell. Both father and son have guided Wild Turkey (the parent company of Russell's Reserve) for almost 70 years.

"You know, when my dad started in 1954, there were 57 distilleries [in Kentucky]," says Eddie. "When I started in '81, there were only 8 left." He considers Wild Turkey to be lucky and attributes its survival to a worldwide presence and years of brand-building. "In the beginning it was premium," Eddie says. He cites John Wayne as a fan. (Thurgood Marshall loved it too.) But to boost sales, marketers broadened its appeal—"the rodeos, the race cars, even the strip clubs." Not to mention frat parties. "I think I've heard millions of times, ‘I was in college, I got a bottle of [Wild Turkey] 101,' and they drank way too much so they didn't go back to it."

The brand had quite the reputation. Phil Anselmo, the lead singer of the heavy metal band Pantera, told Revolver that while dealing with chronic back pain, "I was drinking an entire bottle of Wild Turkey every night before a show to numb the pain I was experiencing."

In a 1981 interview with Rolling Stone, the late Warren Zevon recalled a final binge before promising to dry out. When a friend asked when he'd stop, Zevon told the magazine, "I had a bottle and a half of Wild Turkey left. I said, ‘When that's gone.'"

Wild Turkey was also the whiskey of choice for Hunter S. Thompson.

The turnaround began as Jimmy Russell, Jim Beam's Booker Noe, and other famed distillers went on the road to share bourbon's origin story and how to appreciate it. Then, in the early '90s, Japan experienced a bourbon boom. "They were way ahead of the curve," says Eddie. "We were doing a couple hundred thousand cases over there when we were probably only doing 600-650,000 cases worldwide. So they sort of saved us." And then that boom came to America. Eddie credits the bartenders: "That's who really changed things. And they went back and started making the classic drinks."

In the process of rediscovering bourbon and whiskey, Americans also developed a deeper appreciation of Wild Turkey. Either sipped neat or in an Old Fashioned, Manhattan, or (Eddie's favorite) a Boulevardier, the brand expanded.

Writer and occasional bourbon sipper Matt Labash calls Wild Turkey "a fine in-betweener—respectable enough that you wouldn't shy away from serving it on the rocks to company, but un-stuffy enough that it wouldn't be considered a high crime to mix it with Coke." Although, he adds, "it should always be considered at least a misdemeanor to ruin any perfectly good bourbon with Coke."

When Eddie Russell started off as a summer employee 40 years ago, Wild Turkey did about 350,000 cases a year. Today it's closer to 1.5 million. And business actually boomed during the shutdown: "What happens in situations like a pandemic, people don't go for the new shiny thing," Eddie explains. "They go for things that they know have been around and know that it's safe."

One of Wild Turkey's best-selling bottles is American Honey—a flavored bourbon. I asked Eddie if this was a way to bring in newcomers and women (the latter has been a long-sought-after demo). He reminds me that in 1976, Jimmy Russell came out with a Wild Turkey honey liqueur, and that was precisely the reason.

I can remember … it was early in my career going to the bourbon festival, and we had the big last night where everyone gets in tuxes and goes around tasting. And all the women were standing in the middle and all the men were tasting the whiskies. And Jimmy had some Wild Turkey honey liqueur in his car—he's always got a boot of whiskey, you know, in the trunk of his car—he brings it in, and every woman in there was lined up. And that's really what he was looking for, something to appeal to the women.

In truth, sales of the liqueur were unremarkable. But in 2006, the Russells came out with American Honey and the timing was right. Combined with American Honey Sting (with just a hint of ghost pepper), it now comprises a half-million cases—a third of overall volume.

In addition to Russell's Reserve 13 Year Old, there are some 20 other varieties of Wild Turkey, including Longbranch, whose creative director is Matthew McConaughey. For Eddie, it's a matter of survival. "You have to keep people's attention," he says. "It's like, all right, here comes Russell's 13 Year Old, what's next? Here's the Master's Keep. What are they going to do next year? So I think you have to do those things to keep people interested in your product."

I'm very interested in their product. Master's Keep One, soon to debut, is a bourbon with a toasted oak finish that clocks in at 101 proof. Based on a scan of online liquor stores, it's practically sold out. The publicist, however, promises to get me a free sample.

*All bourbons are whiskey, but not all whiskies are bourbon. To be called bourbon, a whiskey must meet specific criteria, including being distilled from at least 51 percent corn and aged in charred new oak barrels at 125 proof or less.

‘Wholly Inadequate’: Federal Agencies Have No System To Check Whether Remote Employees Are Actually Working 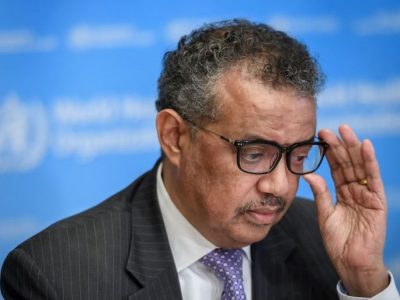