CBS announced an agreement to adapt one of the eight romance novels the Democrat authored under the pen name Selena Montgomery. Abrams, fresh from her defeat in the 2018 Georgia governor's race, will reportedly be involved in the show's production.

The 2004 novel Never Tell centers on criminal psychologist Erin Abbott, an adjunct professor teaching "Murder 101" at Burkeen University in New Orleans. In her pursuit of a serial killer terrorizing the city, Erin partners with Gabriel Moss, an investigative journalist seeking a juicy story to save his failing newspaper.

Though Abrams characterizes her work as "romantic suspense," the emphasis in Never Tell is certainly on the romance. Not for the faint-hearted, Abrams leaves no stone unturned in the book's frequent descriptions of sexual encounters between Erin and Gabriel.

Clocking in at 342 steamy pages, Never Tell is by no means an easy skim, according to a Washington Free Beacon analysis [Editor's Note: Spoilers below].

Even the book's synopsis is sexual, as Gabriel is presented as ‘just the man to reveal the woman inside' Erin 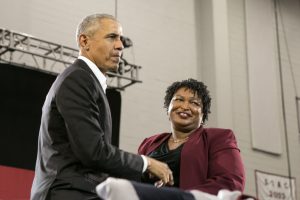 "Journalist Gabriel Moss is hot to find his next huge story—and he knows Erin is on to something big. From the moment they meet, Gabriel senses that Erin is hiding something. One thing is certain: Erin's boxy suits and sensible shoes hide a delicate beauty waiting to emerge … and Gabriel is just the man to reveal the woman inside."

"Gabriel brushed a hand along Erin's arm and captured her fingers by threading them with his own. Normally, he pretended to respect boundaries until he'd built enough trust to disregard them. But contact with her seemed vital, and he was driven to touch.… Erin tugged urgently at her imprisoned fingers. ‘Please. Let me go.' Genevieve noted Erin's frightened eyes and Gabriel's unyielding grip. ‘Gabriel,' she said as she stepped firmly between them. The movement forced him to release Erin."

"But Gabriel wasn't quite ready to let her go. It was becoming a habit, he thought as he unerringly captured her wrist. Fragile bones shifted beneath his grip, jerking angrily … Futilely she tried to pull her hand free. Which was a mistake. The slide of skin made her pulse leap. Feeling her reaction, Gabriel bent closer and shook his head in mock disappointment. ‘Not very hospitable of you, Dr. Abbott.' Erin scowled as he captured her other hand. This had gone long enough. ‘Let … me … go.' … Instead of releasing her, he lifted her right hand to his lips. With his eyes on hers, he gave in to impulse and nipped at the rigid knuckles. ‘Say the magic word.'"

‘I choose who touches me.' Erin claps back, but Gabriel has none of it

"Though only her legs were imprisoned and a single fingertip touched suddenly sensitive flesh, Erin felt surrounded. Invaded. What disturbed more was the feeling of safety. ‘I don't want you as a partner. I don't want you in my house,' she said. ‘But you keep crowding me.' … ‘Take your hands off of me.' She flicked a disdainful gaze at the hand that now covered her own. ‘I choose who touches me.' The haughty sneer pulled at him, stiffened his spine. Whenever she chose that lady-of-the-manor tone, he was hard-pressed not to snarl … ‘Don't push me, honey. I don't like playing games.'" 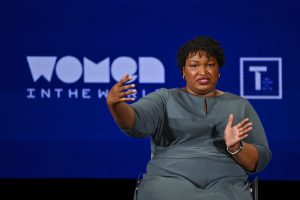 "‘Gabriel.' The whisper became a muffled, urgent demand. ‘Gabriel, stop.' Erin followed the command with an ungentle nip at his ear, the only flesh she could reach… ‘For God's sake, woman, stop moving,' he growled, and threw an arm across her writhing body, trapping her where she lay against sensitive, rigid flesh. Erin bucked in protest, and Gabriel tightened his leg warningly. ‘If you have any compassion in you at all, you'll just be still.'"

"Her hands skimmed along beneath his shirt, and Gabriel arched with pleasure. He rewarded the discovery with tender kisses pressed to her temple, gentle nibbles along her throat. Tracing the collar of her shirt, he pushed the wide band aside and traced the bared flesh with warm licks of fire. Down, over her shoulder, the shirt fell, and he followed, unwilling to miss even a taste.… Shrouded in the scent of him, Erin tested corded muscle at his neck. Unsatisfied, she nipped at his chest, soothing small wounds with delicate flicks of tongue. He tasted mysterious and familiar. She feasted."

Gabriel draws a 'rounded, full globe' of ‘high, full breasts tipped with chocolate' into his mouth

"Tracing the line of her body, he savored the elegant beauty of her form. Creamy skin and lovely, rounded curves. High, full breasts tipped with chocolate rose above the slight mound of her belly. Generous hips tapered into smooth, graceful thighs, impossibly long legs. He dipped his head, drawing a rounded, full globe into his mouth. The pull and scrape and tug at her sensitive skin made Erin writhe against him." 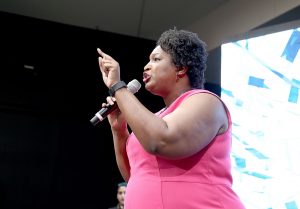 Gabriel ‘flow[s] inside her' with ‘heady enchantment'

"Slowly, inexorably, he moved within the satiny pulse of heat. … When her body trembled and his vibrated in counterpoint, he knew. ‘Now,' they moaned in aroused unison. He flowed inside her. She surrounded him. Control, tenuous and thready, snapped. Frantic, urgent, their bodies joined together, hips dancing in sinuous motion, building heady enchantment. They sank into each other, unwilling to be apart. They chased their pleasure, unable to be still. They came together, knowing no other way."

Gabriel has his way ‘with a recklessness that he couldn't control'

"Finally, having mapped what no other man had, he covered himself and slid inside. In concert, he took her mouth and her body, parried and thrust with a recklessness that he couldn’t control. Discipline, restraint, control had no dominion. Only now. Only the glide of dewy skin, the violent tenderness of passionate kisses, and the race for more."

Abrams gives Gabriel a ‘ happily ever after' despite his predatory behavior

"‘Say it, Erin.' His mouth floated above hers, refusing to give them both what they'd waited a lifetime to feel. ‘No more teasers. Give me the headline.' ‘I love you, Gabriel Moss. End of story.'"