‘Us,’ ‘Dragged Across Concrete’ Reviews

A view from the underclass

Subtlety is, perhaps, an overrated quality in art—give people enough room to interpret and they're liable to come up with any goofy thing—but there's still something to be said for trusting your audience to intuit what you're up to rather than simply telling them.

So, when the terrified family of Jordan Peele's latest—whose home has been invaded by doppelgangers bent on death and destruction—ask their identical twins "Who are you?" there might be, shall we say, a slightly less direct way for their monstrous twins to respond than by wheezing "We're Americans!" As if we could not discern that these are our nation's forgotten people from their prison-like overalls, their tales of woe, the fact that they emerge from the literal underground like CHUDs who have stolen the faces of the American upper-middle-class.

As if the title of Peele's film, Us—you or me and them; Us, U.S., the United States—was not a bright, blinding flare.

This is not to say that Us isn't entertaining, an aggressive mixture of scares and laughs generating alternating gasps and giggles from the audience so intense that significant chunks of dialogue were, at times, rendered unintelligible. The film begins in 1986, when Adelaide (Madison Curry) wanders off from her family at the Santa Cruz boardwalk. Ducking into a hall of mirrors to avoid a rainstorm, she comes across something so scary—herself, but not a reflection—that it strikes her dumb for months after.

Flashforward to the present, where Adelaide (Lupita Nyong'o) is returning to the beach with her family: husband Gabe Wilson (Winston Duke), daughter Zora (Shahadi Wright Joseph), and son Jason (Evan Alex). Adelaide is uncomfortable, suffering from a lingering case of PTSD, but the family guilts her into going down to the water so they can hang out with the Tyer family, obnoxiously oblivious upper-class types headed by puffy patriarch Josh (Tim Heidecker) and boozy matriarch Kitty (Elisabeth Moss).

Writer/director Peele is admirably efficient in mining dread out of the idea that our own scariest foes are ourselves. There's very little in the way of graphic violence or cheap jump scares once things start getting weird; the chills are more dependent on costume and makeup. The strange manner in which the actors move inspires revulsion. There's something deeply chilling about the just-off faces of the Wilson family's clones, the eyebrows that have been shaved off, the hair pulled back an inch too far. The way Jason's twin moves like a spider or Adelaide's twin floats with a dancer's precision is scarier in its oddity than any bloodbath.

There is blood, of course, plenty of it. There's also laughter. Tim Heidecker, best known for his brand of Dadaist humor on Cartoon Network shows like "Tim and Eric Awesome Show, Great Job," is the film's low-key MVP. As a sort of living avatar of white privilege—he's got a great house and a great car, his every move inspiring envy in his well-off-but-not-quite-as-well-off friend, Gabe—he's perfectly dorky. And Josh's double, which Heidecker plays as though he's the master of deadly dad jokes, is the funniest thing in the movie.

While Heidecker wears the clown mask, Nyong'o wears the tragic one. Adelaide and Red (as the credits call Adelaide's double) both feel like fully fleshed out characters, as opposed to the rest of the evil twins. They both have wants, desires. Red has suffered so much; Adelaide lived in fear for so long. Nyong'o's ability to shift from hate to terror and back to hate again, depending on the scene and the shot, is eerily beautiful and modestly heartbreaking. And yet, both radiate a mother's love for their wards. Hers is one of the most striking performances I've seen in some time; it will haunt me for quite a while.

Us doesn't really make much sense if you give it more than 10 seconds of thought; the brain transplants in Get Out are logically airtight, by way of comparison. But as fable-horror, a suggestion that nothing more than an accident of fate separates the winners and losers in our modern world, Us is striking and effective. 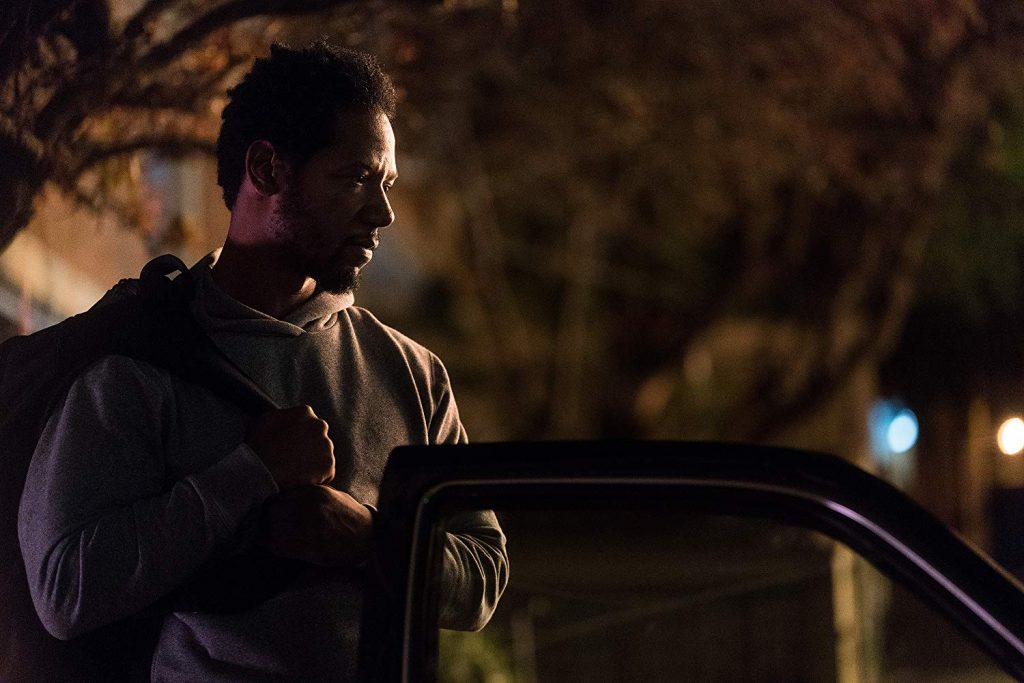 Tory Kittles in ‘Dragged Across Concrete'

Like Us, Dragged Across Concrete—hitting VOD this Friday along with a few theaters—does not shy away from the obvious. Writer/director S. Craig Zahler has points to make, and he's not particularly interested in subtlety.

"Being branded a racist in today's public forum is like being accused of communism in the fifties—whether it's a possibly offensive remark made in a private phone call or the indelicate treatment of a minority who sells drugs to children," Lt. Calvert (Don Johnson) says to Detectives Brett Ridgeman (Mel Gibson) and Anthony Lurasetti (Vince Vaughn), two real police about to learn how dangerous the so-called PC police can be after video of them roughing up a suspect goes viral. "The entertainment industry, formerly known as the news, needs villains."

Dragged Across Concrete is nominally a heist flick about a pair of lower-middle-class cops (the aforementioned detectives) who rob some bank robbers after getting suspended for doing their jobs. In actuality, Dragged Across Concrete is much more. It is an elucidation of the state of society, a lament against the ruin that change is wreaking upon the people forced to live in a world they neither recognize nor like. Zahler's film is as much about the forgotten and abused underclass as Us, but more successfully sells its message by getting us inside the skins of those made to suffer.

You see this in the way Zahler structures his film. We don't open on the racially insensitive cops but on an Henry Johns (Tory Kittles), an ex-con, fresh out of prison, experiencing the ways of the flesh for the first time in years. The hooker he is with is an alum from his old school—they liked each other in Mr. Lorenzo's class, apparently, they neither knew that at the time—both he and she forced into a life of crime and degradation by the lack of opportunity presented them. Henry is smart—he sees the angles even if his patois is decidedly of the street, a bit of camouflage to ensure he is underestimated—he just never had a chance. Not with his awful schools, his drug-addicted mother. As in Us, class, and not race, is the operative framework here.

There is probably a cut of Dragged Across Concrete that is less than 160 minutes long, keeps to a tighter storytelling path, and does not take 50 minutes to get to the action of the story. That's a cut that maybe avoids the long, perfectly framed takes in which characters sit around and talk to each other, feel each other out, learn what's going through their heads. There's a cut that focuses more clearly on the sporadic bursts of ultraviolence and the zippy one-liners.

It's also a cut that would likely lose the subplot involving Kelly Summer (Jennifer Carpenter), a bank teller headed back to work after maternity leave. Very reluctantly headed back. She doesn't want to go at all—but she's forced to. Her partner, standing behind a chained door, reminds her that she is the primary breadwinner. He's not worth as much in the marketplace as she is, so he's doing the good, progressive thing and staying home with the baby. He'll take good care of the kid, he promises. She has to go. Her tears don't matter as much as earning money. Gender equality demands that she put her maternal instinct aside and march to the office.

For this, she will suffer. And the baby will suffer and the father will suffer. Just as Henry's brother suffers, his mother turning to drugs to numb the pain of life and prostitution to pay for the drugs. Just as Brett and Anthony suffer after refusing to treat with kid gloves a drug dealer who lives in a nicer apartment than either of them could afford. Just as Brett's daughter suffers, assaulted five times in the span of two years by the influx of hoodlums in their increasingly crime-ridden neighborhood. This is what progress has wrought: suffering.

That Zahler's latest is reactionary is not particularly surprising. His previous film, Brawl in Cell Block 99, featured a guy who owns two American flags going up against Mexican drug dealers who hire a Korean abortionist to threaten an unborn child. His film before that, Bone Tomahawk, was a horror-western about an offshoot tribe of natives that were depicted as literally subhuman. Completely lacking in patience for political correctness, Zahler cannot be dismissed as a mere rightwing hack. His films may lack the showy tricks of a Tarantino, another elevator of B-movie tropes, but no one would deny that Zahler knows what to do with a camera. Each shot is composed like a painting, special thought given to lighting and the use of shadow to convey internal mood. This is one of the few movies I've resented having to watch on a laptop in order to write a review: It's too pretty to enjoy in that small a format.

Yes, at 160 minutes Dragged Across Concrete can sometimes feel a bit slow. But I can't wait to see it again—this time on a big screen.