The Case for London Broil

As states begin to lift their remaining COVID restrictions, Americans are dealing with a new dilemma—what to grill at the big summer cookout. Sure it's great to have large gatherings in the backyard again. You might even mark the occasion by grilling steaks. That is, until you add up those meat prices, which are high enough to send you running back indoors.

Take, for example, the Whole Foods in Arlington, Va. Behind the glass-enclosed meat case is a carnivore's cornucopia: brats, marinated skewers, pork, lamb, and gorgeous pieces of bright-red, well-marbled beef. But treating all those relatives to grass-fed New York strips, which go for $18.99 a pound? Probably not. Likewise, prime ribeye—the most flavorful of cuts—runs $19.99 a pound. Tender filet mignon is an eye-popping $29.99 a pound. And top round London broil sells for $8.99 a pound.

No, that's not a typo. Tucked away in the back row, a stack of uniformly dark-red slabs of beef can be had for a steal. The question is: Can you pull off serving one of the toughest cuts of meat and have it be a crowd-pleaser?

To be sure, many of us have at some point eaten London broil in one form or another. My in-laws have been serving it for years, marinating the meat in Italian dressing overnight. The key is to serve it as close to rare as possible. With barely any fat on it—top round is from the cow's muscular hind legs—an even slightly overcooked London broil becomes, as my mother-in-law would say, shoe leather.

Keep in mind that London broil is not a cut of meat but rather a reference to how it's made. It "seems to be one of those dishes that started as a preparation but evolved into the cut of meat used for the preparation," says Phyllis Richman. The former longtime restaurant critic for the Washington Post speculates it refers to the carving method: "The steak is carved across the grain to avoid having long strands. Short strands are much easier to cut and to chew than long strands of beef."

In fact, little is known about the meat's origins. The first print mentions of London broil date back to the early 20th century. Some say it came from Philadelphia. A restaurant ad in the New York Evening World from August 18, 1919, lists "London Broil with French fried potatoes 40 cents."

The only thing certain is it didn't come from across the pond. "English sources assure us [London broil] is of American inspiration," Pierre Franey wrote in his New York Times column from 1978. Milk Street magazine's president and founder Christopher Kimball concurs: "Nobody in London has heard of London broil."

According to legendary chef James Beard, the dish was originally made with flank steak, a more flavorful cut from the cow's abdomen. But, as he wrote in Beard on Food (1974), "supermarkets and butchers are beginning to market all sorts of different cuts under the name of London broil—sirloin butt or rump steak, ribeye steak, even top round."

Kimball suspects the term is still used as a marketing gimmick akin to Chilean sea bass, "which is really Patagonian Toothfish and butt-ugly." Tom Heinen, co-president of the Ohio-based Heinen's supermarket chain, agrees: "Meat merchandisers have tried to create appealing names to help sell the product. The USDA has cracked down on labeling over the years so that everyone is supposed to label species, sub primal, and then cut name. So the proper label is Beef Round, London Broil." (Regardless of name, it's not a big seller—at Heinen's, it only accounts for 1.2 percent of steak sales.)

"London Broil is a case of rolling the dice," says Kimball. "It can be flank steak (best case scenario), but it can also be from the top sirloin or the round (worst case scenario)."

Following a visit to three nearby supermarkets, it is clear I'm dealing with the worst case scenario—all of them sell top round under the guise of London broil. While it goes for $8.99 a pound at Whole Foods, the London broil at Harris Teeter sells for $6.99 a pound. At Safeway it's a mere $4.50 a pound. I opt for the Whole Foods and Harris Teeter brands.

Harris Teeter Reserve's London broil is USDA Choice (one level below Prime) and prepackaged. It also comes with cooking tips. I rely, however, on Rodney from the seafood department who, a coworker assures me, has the ultimate recipe for London broil.

"First you marinate it in Montreal seasoning and black pepper sauce for two to three days," Rodney explains. The sauce brand is Nippon Shokken, which the store hasn't yet stocked, so a supervisor hands me some in an unmarked plastic container. "This one's on us."

Per Rodney's instructions, after three days' marination, I patted the meat dry and seared it on the grill, four minutes each side. I then transferred it to an oven where it cooked for an additional 30 minutes at 375 degrees. If you're thinking that is way too hot for way too long, you're right—it came out well-done. 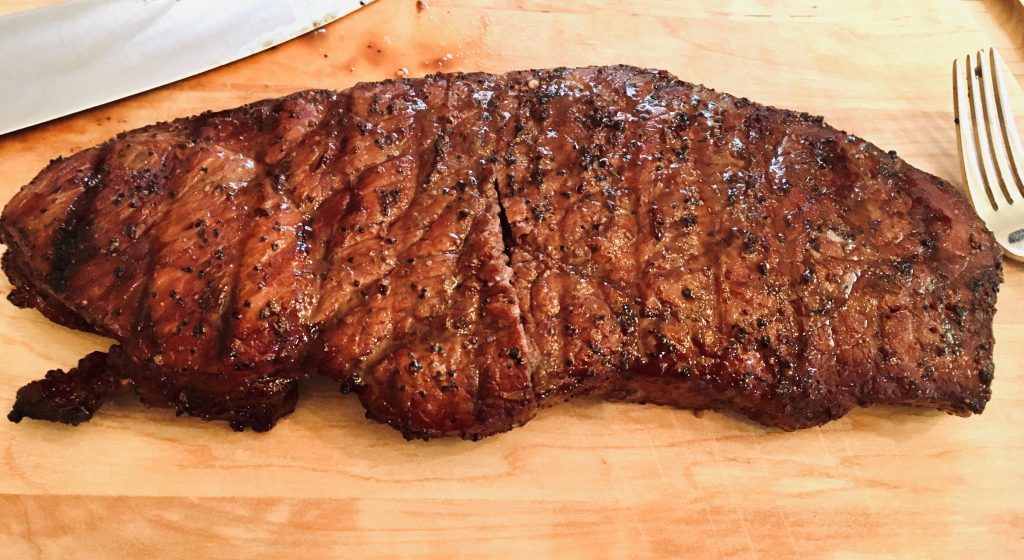 But it wasn't a complete loss thanks to the 72-hour marination, which gave it a tangy sweetness. Just make sure to check the meat's temperature off the grill before transferring it to the oven or simply move to a cooler part of the grill. Once the thickest section reads 125 degrees, it's ready.

For the Whole Foods London broil, I turn to Kimball, whose Milk Street magazine offers recipes inspired from around the world. He mentions one from Turkey—ribeye steak with tart pomegranate molasses and rosemary—that he says would be ideal even for this tough cut:

Grate a medium white onion, add a quarter cup of pomegranate molasses and one teaspoon of Aleppo pepper (or a half teaspoon each of sweet paprika and cayenne) and let the meat marinate overnight in the fridge. Scrape off the marinade and pat the meat dry, coat one side with oil, grill, flip, and coat the other side before replacing. Serve with drizzled Pom Molasses and you can sprinkle with some chopped fresh rosemary.

Pomegranate molasses I found—Aleppo pepper I didn't. Being mindful of the meat's temperature, I avoided my mistake with Rodney's recipe. The result was a lean rare steak with mild hints of citrus that's sure to satisfy the masses without breaking the bank. 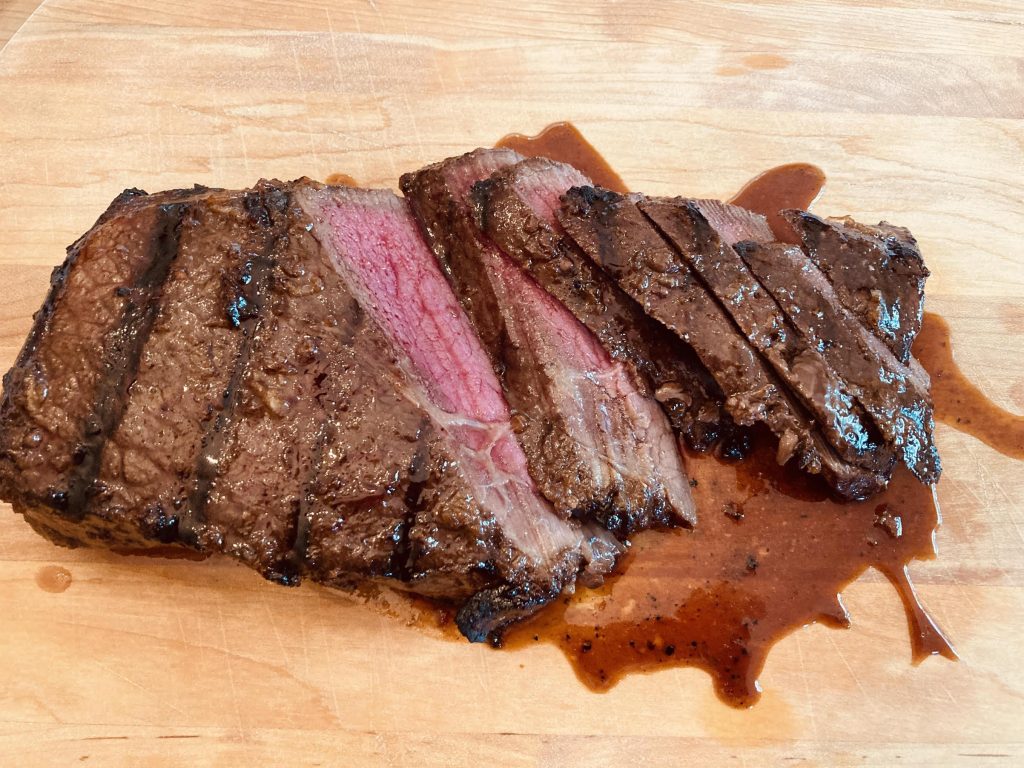 "It's fine, but it's no ribeye," said my wife. True. But at least it's not shoe leather.