‘The Best of Enemies,’ ‘The Highwaymen’ Reviews

A glimpse into the past

Why do we go to the movies? Strike that: Why do we use that locution, "to the movies"? Movie theaters are the physical locations to which we are going, after all. The phrasing itself is a bit anachronistic in the age of Netflix and Hulu and Prime and the Criterion Channel and Shudder and Vudu: the movies seem to come to us as much as we go to them.

Yet, go we do, even if we don't go to movies like The Best of Enemies as much as we might have in years past. It's a passé sort of picture, a liberal message movie about the ills of racism and the ways in which we can join together to improve our world. The theorists and the scolds do not care for it because it runs afoul of various sensibilities. The film seems more interested in its white protagonist, a Klan leader opposed to integration named C.P. Ellis (Sam Rockwell), than its African-American protagonist, activist Ann Atwater (Taraji P. Henson); the movie demonstrates racial progress via its impact on him rather than her. His change is what matters, not her efforts at improving the world.

And yet, like Green Book before it, The Best of Enemies strikes a chord with regular audiences. You see it in the A from CinemaScore; you hear it in the appreciative murmurs from audiences as credits roll. In a way, The Best of Enemies is, for all its supposed stuffiness and stodginess, a rather perfect example of why we "go to the movies." It's a trip into a past—not a distant past, less than 50 years, but one that is increasingly unrecognizable—and an artful reminder of the possibilities of change.

This is the power of cinema, the ability to transport us into another place and time. Too often that power is used to send us to a world in which musclebound supermen battle it out via computer-generated fakery. Here, though, writer/director Robin Bissell sends us to the world of 1971, with its vintage cars and its outré racism. This is a world in which Klan members armed with shotguns feel comfortable shooting up a home because the woman who lives inside dates a black man; in which African-Americans are expected to send their kids to a school literally smoldering from a fire that has largely destroyed it. The costume design screams South, from Garland Keith's (the great Nick Searcy) Colonel Sanders get-up to C.P.'s garage blues, unbuttoned just enough to give us a good glimpse of the dirty undershirt beneath.

The Best of Enemies concerns a "charrette," a community meeting during which opposing sides come together to solve Durham's segregation problems without heavy handed action from the courts. Bissell for the most part elides the specifics of the plans these activists and reactionaries argued for and against, choosing instead to show how the people on each side interacted and grew more comfortable with each other. He keeps the camera tight on Henson and Rockwell's faces as the community debates, their eyes and mouths wincing and grimacing to help us see the invisible changes taking place within.

Those who would argue that The Best of Enemies falters because it's yet another white savior movie are being a bit obtuse: Of course the Klan-leader-cum-desegregationist is at the heart of this story. He's the one who has to change. If he doesn't change, the world can't either. 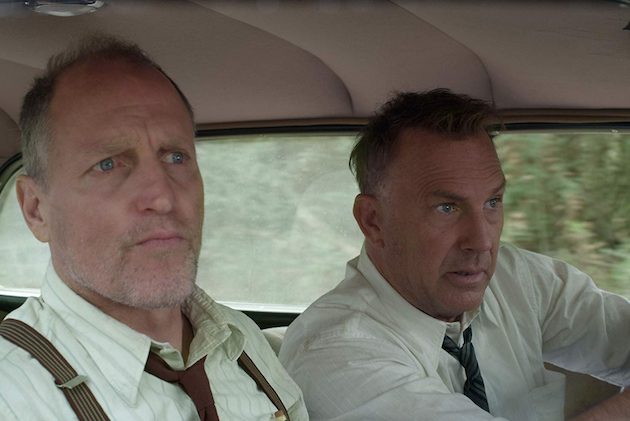 Frankly, The Best of Enemies—as competently shot and as passionately acted as it is—isn't really my preferred destination when I'm going to the movies. The Highwaymen is more like it. Another jaunt into the past, this one more distant, The Highwaymen recounts Frank Hamer (Kevin Costner) and Maney Gault's (Woody Harrelson) pursuit, and killing, of the murderous bank robbers Bonnie and Clyde (Emily Brobst and Edward Bossert, respectively).

Director John Lee Hancock seeks to deglamorize the killers, focusing not on their youthful faces or swaggering mien or charming chatter, but on Bonnie's limp. The camera lingers on her leg, injured in an accident, as she drags it about between shootouts with the cops; we see her victims' bloody faces far more frequently than her own, her beauty reflected only in the adoption of her hat and hair by the masses bewitched by her myth.

Instead of the Depression-era hoods, robbin', Hancock focuses on the less glamorous Hamer and Gault. Texas Rangers forced into retirement after a progressive busybody took over the governor's mansion and disbanded their legendary unit, the lawmen must take down the pair of murderers. Hamer is hesitant, having retired to a comfortable life with a well-off wife. It isn't until he sees the killers lionized time and again in the newspapers that he decides something has to be done.

It's that adoration that gets to Hamer, the grotesquerie of killers and armed thieves being celebrated because they gave some of their loot to locals and took from banks that had been declared enemies of the people. You see his frustration after a gas station attendant wishes the duo "all the luck to 'em," since "they're only taking from the banks, who are taking from the poor folks, like me." Hamer gets back in his car and closes his suicide door, sitting there as the camera pushes in from the side to let us see both him and Gault. Hancock then cuts to a head-on view, isolating Costner, resting on him with a slightly jittery handheld shot that echoes the lawman hitting his boiling point.

He's had enough, and the beating he puts on that gas station attendant may earn some chinwags from those who frown at the idea of cops getting information out of a guy with their fists. "There's a peace officer who died in a puddle of himself back in Dallas," Hamer says, choking the grease monkey in a headlock. "He was trying to get the shells out of his pockets when his head was blown off Easter Sunday morning. His family will be on the breadline next week. All luck to 'em? All luck to 'em?"

You can understand the grease monkey's resentment, the frustration of the common people, given the world Hancock has transported us to. Like The Best of Enemies, The Highwaymen is a journey into our past and a reminder of how much things have changed. Poverty—real poverty, with hunger and dirt and fall-down-shacks-for-houses—is everywhere, shanties filled with roving migrants looking to earn pennies a day springing up by the sides of roads.

As James Lileks noted last week, the revulsion some critics feel toward Hancock's film because it dares subvert a Boomer cinematic classic by showing killers to be killers is faintly embarrassing. The lingering fondness for Bonnie and Clyde, immortalized by the beauty of Warren Beatty and Faye Dunaway all those years ago, isn't shocking, I suppose. People go to the movies to be transported into different bodies as much as different times. We can't be surprised when the images of beautiful killers resonate more than the grumpy old lawmen who ended their reign of terror. As much as America has changed over the last eighty-plus years, from the Depression to desegregation to détente to decline, some fads—like glamorizing murderous nutjobs—just never go out of style.