"Thank goodness my fiancé Kate was there," Verlander said of the night he had to decide whether or not to leave the Detroit Tigers, where he had played for the previous 13 seasons.

Once Verlander decided he was ready to go, Upton was nothing but supportive. Her words were so enthusiastically supportive, in fact, that Verlander had to censor them during his interview.

"Finally, I'm still pacing and I just stop and I look at Kate and I go, ‘Screw it, we're going to Houston,' and she's like, "Heck yeah,'" Verlander said. "I'm kinda trying to say the right language here, but she says, ‘Heck yeah, we're going."

ESPN, in a surprisingly wise editorial decision, brought the conversation back to Upton.

"I want to go back to one thing," said host Tony Kornheiser. "If Kate's not there, if you don't have that from her, do you still make that decision?"

"She was extremely supportive of whatever decision I made," Verlander said.

Verlander is undefeated in his three starts since being traded to Houston. In 21 innings pitched he has allowed just two earned runs and struck out 26 batters.

Upton has been equally impressive, stealing the show during the team's playoff-clinching celebration by kissing Verlander through the protective netting.

Upton has also emerged as one of the teams most passionate fans. 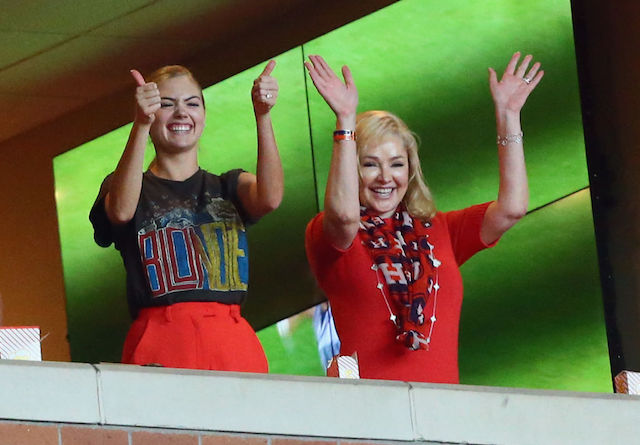 She has also already been hit on by mascot Orbit.