Support for Protests Dropped in Wisconsin Even Before Kenosha Riots

Support for anti-police protests and the Black Lives Matter movement dropped precipitously among Wisconsin residents between mid-June and early August, a new poll finds, offering electoral alarm bells for Democrats who have defended or downplayed rioting and violence associated with them.

Mass protests that began in the wake of George Floyd's killing commanded a net 25 percentage-point approval in the third week of June, the Marquette Law School Poll found at the time. But by the first week of August, respondents to the same poll were evenly divided, with equal numbers supporting and opposing the protests—a 25 point drop in net approval.

The Black Lives Matter movement similarly lost 20 percentage points of support, dropping from a net approval of 32 percent to 12 percent. By contrast, Wisconsinites grew more supportive of the police, whose net approval rose from 54 percent to 63 percent.

All of these findings predate the past week's chaos in Kenosha, Wis., as the police shooting of Jacob Blake led to protests, riots, looting, and the shooting of two people by a 17-year-old from Illinois. Those events have caused Kenosha residents to sour further on the protests, the New York Times reported, and pushed them toward supporting President Donald Trump.

The new poll's finding, then, should raise concerns among Democrats hoping to retake the White House in 2020. Trump's upset victory in the 2016 election ran through Wisconsin, long considered part of the "blue wall"—no Republican had won it since Ronald Reagan's landslide reelection in 1984. But Wisconsin residents' increasing distaste for public disorder, combined with Trump's law-and-order message, may deliver the Badger State, and the White House, to the president once again.

That concern for Democrats is in part because declining support for protests and Black Lives Matter are not restricted to Wisconsin Republicans. Support has also fallen among Democrats, and particularly independents, among whom the protests command a net approval of just 1 percentage point. 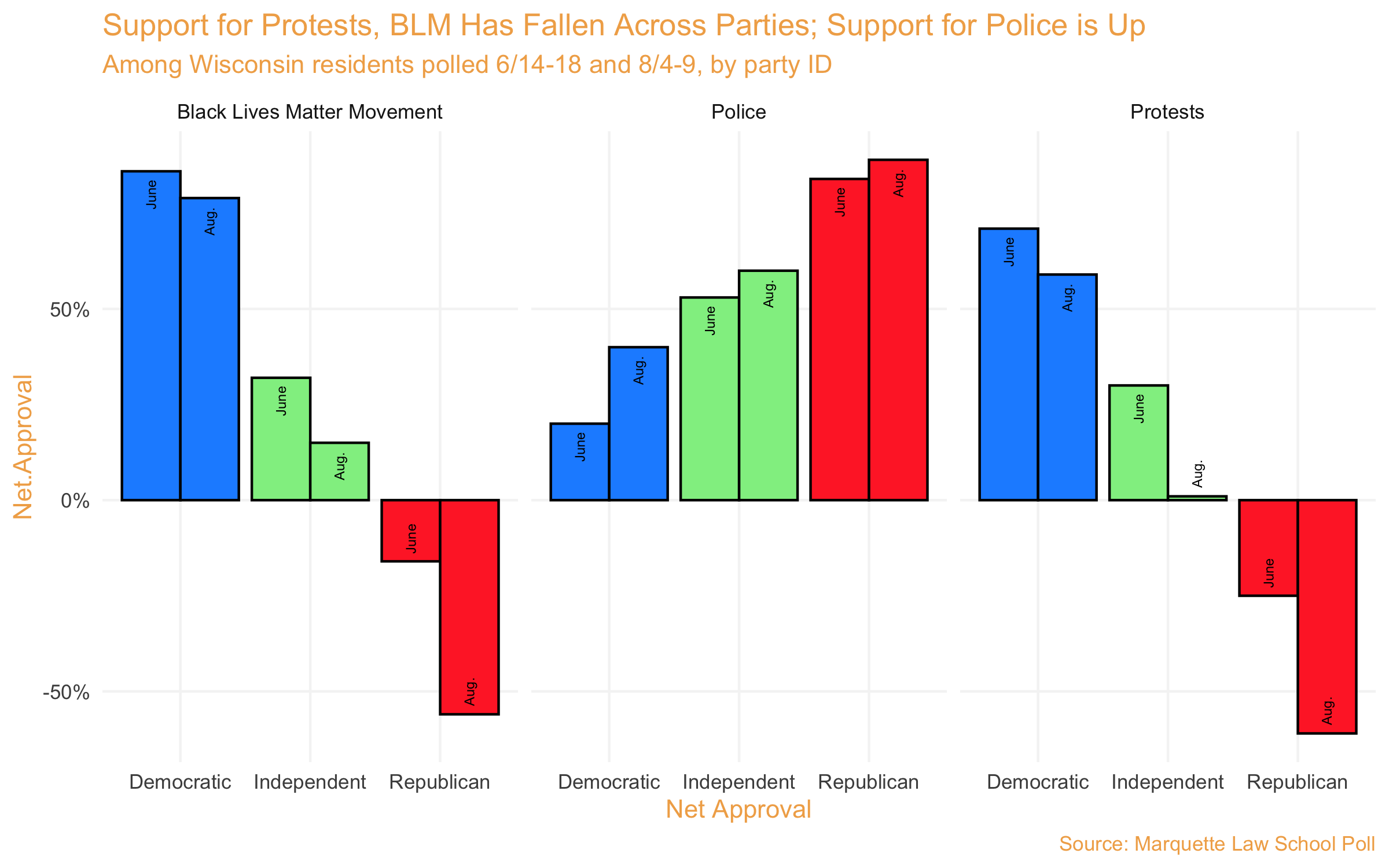 This last figure may be particularly concerning to Democrats aiming to recover Wisconsin for candidate Joe Biden. In the 2016 election, independents broke for Trump—50 percent picked him, while 40 percent chose former secretary of state Hillary Clinton, exit polls show. Closing that gap may be essential to a Democratic victory.

At the same time, Wisconsin residents are less than positive about Trump's "handling" of the protests. Just 32 percent approve, up only slightly from 30 percent approval in June.

Trump's actions in the past week may affect that trend, however. On Thursday, the president announced he would be deploying federal law enforcement and the National Guard to help quell the violence in Kenosha, at the invitation of Democratic governor Tony Evers.

Trump's deployment, combined with the general unrest, may exacerbate Democrats' electoral challenge. Trump won Kenosha county by just 255 votes in 2016. But the unrest could widen that gap: One Kenosha Democrat, Scott Haight, told the Times that he had resolved not to vote in 2020, blaming the unrest on the state's Democratic lieutenant governor. Another, waitress Priscella Gazda, told the Times she's going from an Obama 2008 voter to a Trump supporter: "He seems to be more about the American people and what we need."