Review: The Wizard of 40 Oz. leads 4 Dorothies through the land of Florida

Spring Breakers strives to be a post-ironic, girl-power-infused meta-commentary on the commodification of sex, the pursuit of material goods, and the objectification of women. One can easily imagine the filmmakers convincing themselves that, by wallowing so fully in exploitative cinema, they are actually critiquing exploitation.

Harmony Korine’s film may fail to transcend its exploitative trappings but, in that failure, Spring Breakers achieves a sort of perverse success. Spring Breakers is titillating and absurd and vulgar and, perhaps most importantly, entertaining.

The movie opens with a series of random, neon-bikini-infused shots on a nameless beach infested with undergrads debauching themselves during spring break. Topless teens bong beers as bros trade high fives and girls grind on each other for the leering approval of the dudes surrounding them. 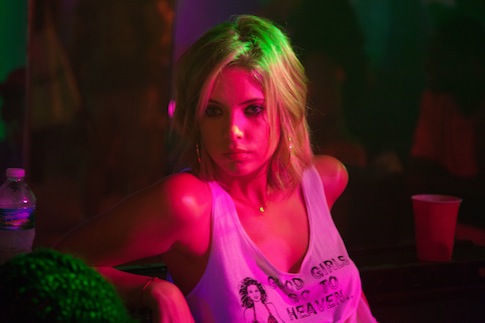 Sandy Florida venues are what Faith (Selena Gomez), Brit (Ashley Benson), Candy (Vanessa Hudgens), and Cotty (Rachel Korine) crave. The quartet is broke—though never lacking for weed, booze, or cocaine—and desperate to go on a spring break trip to pull them out of the drudgery that is college life.

"It’s more than spring break: It’s our chance to see something else," one of the girls says early on. So Brit, Candy, and Cotty decide to commit armed robbery to fund their escapade.

Flush with cash and feeling empowered, the four hop on a bus and head to the sun-drenched beaches. Booze, scooters, dub-step, boys, cocaine, DJs, pools—"I’m starting to think this is the most spiritual place in the world," Faith says as the girls cavort half-clothed and fully smashed.

Paradise is lost when the four girls get arrested for smashing up their hotel room during a cocaine-fueled blowout while in the company of a pair of drug dealers. Sitting in county lockup—broke, scared, cold, wearing bikinis—the four are bailed out by the drug dealers’ boss, Alien (James Franco). 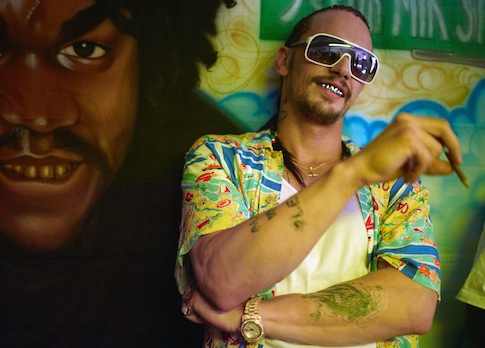 Sporting gold grills and a multitude of tats, Alien takes the girls on a tour of Florida’s seedy side. Surrounded by beefy guys who have never set foot on campus and are just "trying to get with" the girls, Faith breaks down. She is terrified, shaking and crying and convinced that something terrible is going to happen. Her tension is palpable and deeply discomforting.

But Faith returns to college, and the tension dissipates. Brit, Candy, and Cotty join Alien on a madcap spree filled with guns and drugs and strip clubs and flashy cars and Britney Spears sing-alongs.

It’s not all fun and games. Taunting drug lords has consequences. But, in a way, it is all fun and games: The scenes that follow Faith’s exit feel fantastic, as though they are a dream she concocted while trying to imagine how events progressed in her absence.

Spring Breakers is, in its way, a deeply reactionary film. It trains a critical eye on the media and its influence on young people. "Just act like it’s a video game, pretend you’re in a movie," one of the girls says before embarking on an armed robbery to fund a trip to what MTV has taught them to think of as paradise.

Faith is at first the subject of mockery for attending a church youth group. As the film progresses, however, it turns out her pastor has armed her with enough common sense to get out of a bad situation.

In this regard, Spring Breakers calls to mind Kids (which Korine wrote) and Lee Hirsch’s Bully, pictures that also wallowed in the breakdown of social norms while expressing disgust at such decadence. Some may criticize Korine for indulging in trash to prosecute his argument, but they are missing the point. When you’ve spent decades crawling through grime, it makes little sense to get angry at the mirror for reflecting filth.

Franco provides an entertaining turn as Alien. Last seen touring the Emerald City, he steps cleanly into his role as the Wizard of 40 Oz. in Spring Breakers. The menace he initially projects fades, only to be replaced by an absurdity that most strikingly manifests itself in an exaggerated consumerism. "Look at all my shit!" he crows, citing, among other things, the voluminous number of shorts he owns and the fact that he has Scarface playing "on repeat."

The girls, two of whom are best known for playing Disney sweethearts, are largely interchangeable, and their interchangeability is one of the reasons Korine’s movie fails as commentary. The girls are playthings and eye candy, shabbily sketched to create a veneer of personality.

Despite its failure to transcend its trash cinema forebears—or perhaps because of that failure—Spring Breakers’ dark absurdity will provide audiences with plenty to think about as they exit the multiplex.