Notes From a Beefsteak Dinner

Feature: Vic Matus has his mind on his stomach, and his stomach on his mind

Last weekend my father-in-law just happened to mention to me a line from Saint Paul:

For, as I have often told you before and now say again even with tears, many live as enemies of the cross of Christ. Their destiny is destruction, their god is their stomach, and their glory is in their shame. Their mind is on earthly things.

I pondered this on Wednesday night while sitting at a long wooden table on the second floor of a bar, drinking from three glasses of whiskey and cocktails simultaneously, eating slices of beef brisket, dripping with oil and fat, dipping them into bowls of au jus and course-ground mustard using only my bare hands—no silverware, no napkins, just an apron to wipe the grease off my fingers, occasionally. In other words, I was at a genuine beefsteak dinner. 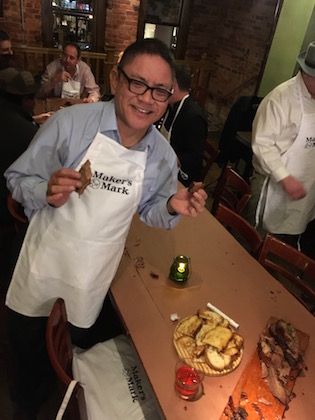 Some eighty years ago, beefsteaks were quite common, especially in New York. Joseph Mitchell, the legendary essayist at the New Yorker, famously chronicled the beefsteak scene in 1939. In the opening of "All You Can Hold for Five Bucks," he describes the dinner as "a form of gluttony as stylized and regional as the riverbank fish fry, the hot-rock clambake, or the Texas barbecue." Crowds wearing aprons and chef hats drank from giant cans of beer and consumed ungodly amounts of steak, hamburgers, lamb chops, and lamb kidneys. The meals often took place in convention halls and were organized by "bowling, fishing, and chowder clubs and lodges and labor unions."

The one I attended was thrown (as Mitchell notes, "a beefsteak is never ‘given’ or ‘held’; it is ‘thrown’ or ‘run’") by spirits giant Beam Suntory and its flagship product, Maker’s Mark. The 30 invitees were local bartenders. This was not a tasting demonstration, mind you. As the Beam representative made sure to point out, this nonpublicized event was strictly a social affair. (In turn, I agreed not to share names.)

In Mitchell’s time, "A lot of those beefsteaks were testimonials. A politician would get elected to something and his friends would throw him a beefsteak. Cops ran a lot of them, too…. Theatrical people were always fond of throwing beefsteaks." And since bartenders love to argue with each other, this particular dinner featured several debates. 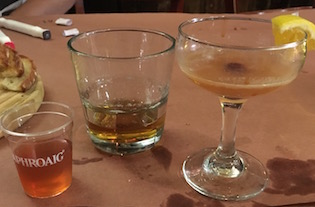 In the first debate, which commenced after someone banged a large wooden mallet on the table, two bartenders challenged each other over the merits of a strictly defined Old Fashioned cocktail versus an Old Fashioned that allows for modifications. One fellow insisted that any changes to the original recipe (whiskey, bitters, sugar, some water, lemon peel) and the drink is no longer an Old Fashioned. The other fellow said the Old Fashioned must evolve with the times—he had no qualms about orange slices, sugar cubes, ice, muddling a cherry, and even adding some Earl Grey tea. Should a bartender adhere to a strict interpretation of the recipe or is the Old Fashioned, shall we say, a living cocktail? A voice vote was taken, and the strict constructionist bartender was declared the winner.

All the while, the rest of us sat wearing our Maker’s Mark aprons (hats were optional) and grabbing those pieces of brisket. This was followed by platters of roast pig, with the heads resting on top. A woman two seats from me wasted no time and ripped the ear off, insisting "that’s the best part." Just as in a classic beefsteak, bread was generously provided—first in the form of toast slices fried in butter and, for the pig, steamed buns for us to make pork buns.

"But wait!" someone interjected. "Shouldn’t a bar give customers what they want? After all, we depend on them for our paychecks." Or, as another bartender argued, "Isn’t the bartender’s job to enlighten?" Yet again, the implications here are deep. (I myself had no answer, having been distracted by my whiskey sour made with duck fat and white foam from a duck egg.)

In the second debate, one barkeep insisted on the importance of using jiggers to measure out drinks. The other, an Englishman, championed the free pour, provided the barkeep was a professional and knew how to count. Not only that, but the lack of jigger allows for multiple drinks to be made at the same time—assuming you work in a crowded bar. Why, without the free pour, how would the movie Cocktail ever get made? On the other hand, not all spouts are equal. Those plastic ones are the worst. And half-empty bottles will pour faster than fuller ones. In the end, a voice vote favored the jigger. 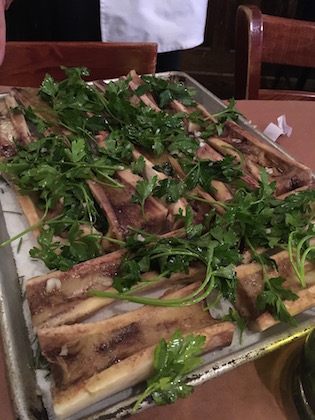 In Mitchell’s telling, the beefsteak is nothing short of a bacchanal. As one meat supplier told the author, "When you go to a beefsteak, you got to figure on eating until it comes out of your ears. Otherwise it would be bad manners." When one patron says she ate six steaks, Mitchell notes her friend’s reply: "Wasn’t you hungry? Why, you eat like a bird."

My experience was tame by comparison. Everyone was rather civil and kept the tables fairly clean. The gluttony was kept to a minimum, with the exception of the last course, featuring slabs of bone marrow dressed with Italian parsley. As one of the hosts demonstrated, you first scoop up all the marrow into your mouth. Then you immediately pour Maker’s Mark Cask Strength into the hollowed out bone (like a canal) and down the hatch. Sure, that might seem a bit much—but refusing to partake in it would be bad manners.