'The Nation' Apologizes for Publishing Poem With 'Disparaging and Ableist' Language

The Nation posted a lengthy apology to its readers after it published a poem that was criticized on social media for being "ableist" and racist.

On July 5, the left-leaning magazine ran a poem titled "How-To" written by Anders Carlson-Wee. Written in either African-American vernacular (according to its detractors) or a Southern dialect (according to supporters), the poem takes the voice of a homeless individual giving advice on how to receive help from unkind and hypocritical strangers.

"Don’t say homeless, they know/ you is," the poem reads. "What they don’t know is what opens/ a wallet, what stops em from counting/ what they drop. If you’re young say younger./ Old say older. If you’re crippled don’t/ flaunt it."

But the poem came under fire on social media weeks later, from critics calling the poem inappropriate and offensive appropriation.

yo fam. I'm trying to understand the voice in this poem. It feels offensive to me and like it's trafficking inappropriately in Black language but is there something i'm missing? Help me understand.

Trying to find anything poetic in these racist scribbles — nada. Whiteness really is one hell of a drug. https://t.co/BDJZzDVNT1

It is with great regret that I have pulled my poem from publication in @thenation. I am unable to entrust my work to a publication that has not just allowed @AndersWeePoet's horrible poem to be published, but failed to rectify the situation by removing it from the site.

In response, The Nation poetry editors Stephanie Burt and Carmen Giménez Smith posted an editor's note on the poem, which they said "contains disparaging and ableist language that has given offense and caused harm to members of several communities."

"As poetry editors, we hold ourselves responsible for the ways in which the work we select is received. We made a serious mistake by choosing to publish the poem 'How-To.' We are sorry for the pain we have caused to the many communities affected by this poem," they wrote.

"When we read the poem we took it as a profane, over-the-top attack on the ways in which members of many groups are asked, or required, to perform the work of marginalization," the explained. "We can no longer read the poem in that way."

Carlson-Wee likewise apologized on Twitter, but his apology was still attacked by those insisting he was using offensive language. 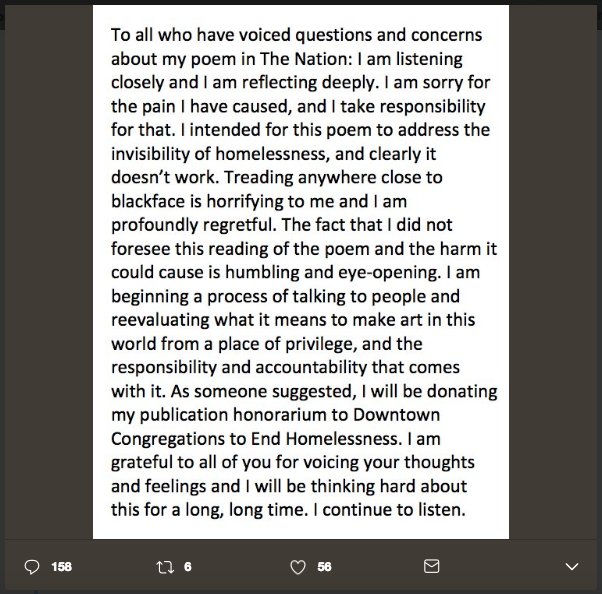 your poem is also ableist & problematic in regards to HIV+ status & so there is more to say than just "oops, sorry I was racist." the harm you caused is multi-faceted.

& we note your use of "eye-opening," we note ableism inherent in (your) language.