"I didn't invent the taco. But I believe I improved it."

As I cradled the Naked Chicken Chalupa in my hands, I had a similar thought. Glen Bell, the late founder of Taco Bell, did not invent the chalupa either. But I believe he improved it.

The first Taco Bell chalupa debuted in 1999—perhaps you recall the tagline, "Drop the chalupa!" It was a deep-fried flatbread containing all your favorite toppings. And it was a sensation. The chalupa had evolved from the flatbread Gordita, which came out the year before.

In its latest iteration, the chalupa has been inverted. The protein is no longer the filling—it's the shell. Breaded, marinated, white meat chicken is now the container for the lettuce, tomatoes, and shredded cheese, dressed lightly in an avocado-ranch sauce. It should be noted that Taco Bell's chalupa is not the same as an authentic Mexican chalupa, which better resembles a large Tostitos scoop shell. No doubt Diana Kennedy, the mother of Mexican cooking, would be mortified at this Americanized chalupa. If she kicked Rick Bayless out of her truck in Mexico, as mentioned in The United States of Arugula, Kennedy might very well run me over. 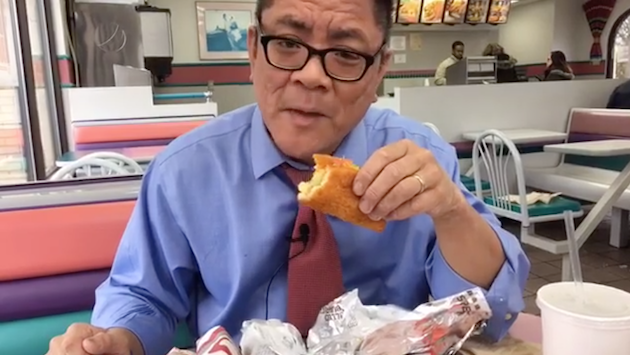 In truth, if you have ever eaten chicken with your bare hands, this is no different. Sure, you'll get grease on your fingers—as you would from holding a drumstick. And it's certainly less messy than dealing with Buffalo wings.

Indeed, the very first taco Glen Bell sold in 1951 was a bit of a mess. Years later, Bell could still recall the businessman who ordered the nineteen-cent "take-oh" (as the customer pronounced it). "Juice ran down his sleeve and dripped on his tie," Bell told author Debra Lee Baldwin in Taco Titan. "I thought, uh-oh, we're not going to be successful. We've lost this one." He was wrong—the customer loved it and ordered a second one because, despite the messiness, the taco was tasty.

And the same goes for this new chalupa. The chicken was not oversalted. And it had crunch. The lettuce and tomatoes were perfect complements. At 440 calories and $2.99 a piece, how can anyone refuse? 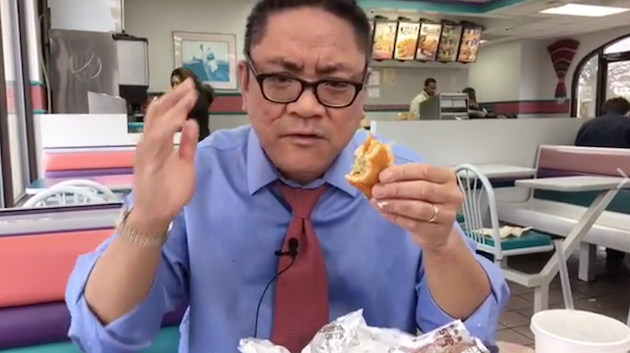 What I should have refused, on the other hand, was the $5 cravings meal, which came with a Cheesy Gordita Crunch, a Beef Supreme Burrito, a crunchy taco, and nachos. Then there was my decision to sample all of these offerings on Facebook Live. History may judge this harshly.

Nevertheless, as I sampled the Naked Chicken Chalupa, I was immediately reminded of a chicken schnitzel—the kind that's pounded flat and fries quickly. Turns out I was right.

Steve Gomez, Taco Bell's manager of product innovation, had received a text message from a colleague, asking, "What if we made a taco out of Chicken Milanese?" ("Milanese" is the Italian version of the schnitzel.) As Gomez explained to me in an email, "This idea sounded crazy at first but inspired the product development team to think differently. After multiple test kitchen recipes, we eventually turned this innovative idea into a delicious product our fans love."

But do the fans love it enough for it to become a permanent addition to the Taco Bell menu? "While we typically don't discuss sales figures," Gomez says, "the national launch has outperformed the test." At the moment, the Naked Chicken Chalupa is available for a limited time only. That may change—but you and I are going to have to eat more chalupas.