I Was a Circus Performer

From the Archives: Ringling Brothers loves their elephants

We’re less than 30 seconds into a Ringling Brothers, Barnum and Bailey show at Miami’s American Airlines Arena and Ashley Smith is nearly in tears.

"He’s singing this live you know," the Ringling Brothers publicist says of the barrel-chested ringmaster belting the national anthem. As part of the act, he constantly turns to face a female acrobat circling the ring while carrying an American flag. "Kelly Ann looks gorgeous," she adds.

"Gorgeous" Kelly Ann is not the flag-waving acrobat but the 9,000-pound elephant carrying her in a circle.

For the next two hours, 7,500 children will witness humans perform death-defying feats of strength and agility, while beasts, well, manage not to eat their human counterparts. No child exhibits the intensity, zeal, and genuine wonder of Smith.

Gosh is she disappointing.

I thought I was meeting some cigar-chomping sadist that would live up to the "sucker born every minute" mantra apocryphally attributed to P.T. Barnum. Instead, I found a bunch of animal-loving NYU grads whose sentimental regard for nature makes me cringe.

The staff’s transparent fondness for their wards hasn’t stopped the World’s Acronymed Animal Activists—groups like People for the Ethical Treatment of Animals, the Humane Society of the United States, and the American Society for the Prevention of Cruelty to Animals—or WAAAs for short, from trying to dismantle the Greatest Show on Earth.

I joined the circus for several days and the only performers I saw abused were the Shaolin Monks. In a three-show day, they’ll spend one hour having metal rebar and oak staffs shattered over vulnerable body parts.

Meanwhile, elephants—whom the WAAAs call overworked—spend roughly five minutes each show running in circles, balancing on barrels, climbing on one another and, for the grand finale, running in circles while Kelly Ann does a headstand.

The show, though impressive, appears more anarchistic than other acts. Aside from the familiar trunk-to-tail march and the group barrel sit, no two elephants do the same trick during the set.

"It’s all based on their natural behavior," Smith said. "Some elephants do headstands or balance, others don’t like it, so we let each of them play to their natural tendencies." 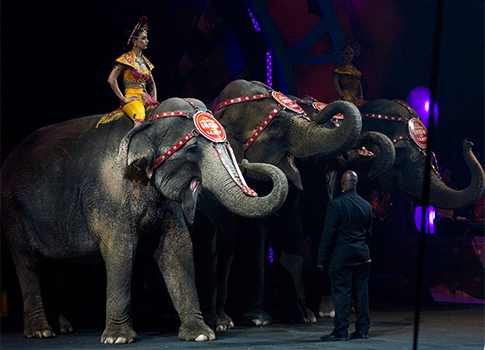 THE CIRCUS IS ENJOYING A HARD-WON VICTORY AGAINST THE WAAAS. For the past 12 years, the ASPCA along with several other animal rights groups have sued Ringling parent company Feld Entertainment, alleging animal abuse. Federal judge Emmet Sullivan dismissed the suit and allowed Feld to countersue on civil racketeering charges that entitle the circus to triple compensation. The ASPCA settled the litigation abuse case for $9.3 million in December.

Ringling is still trying to recoup the $22 million it spent on its legal defense from ASPCA's partners: The Humane Society of the United States, the Fund for Animals, Animal Welfare Institute, Animal Protection Institute United with Born Free USA, and their attorneys.

The WAAAs initially sued Feld on behalf of former Ringling employee Tom Rider, who allegedly suffered psychological trauma from animal cruelty. He also collected six-figure fees from the WAAA law firm, a revelation that led Judge Sullivan to dismiss his testimony "with prejudice."

"I’ve worked with 600 elephants in my career, overseen 54 births. That’s a lot different than working at a zoo for a couple years and declaring yourself an expert because you walked by a few elephants," Schmitt said.

Walter Olson, a legal scholar with the Cato Institute, said that the "striking" settlement could lend credence to Ringling’s claim of persecution.

"Anyone can pay relatively modest sums to make nuisance litigation disappear, but most people don’t see $9.3 million as a nuisance payment—that’s ten percent of [ASPCA’s] annual donations," he said.

The group downplayed the settlement.

"The ASPCA concluded that it is in the best interests of the organization to resolve this expensive, protracted litigation," it said in a statement.

Ringling knows a thing or two about nuisance payments. The multi-billion dollar company paid its regulator, the Department of Agriculture, $270,000 in 2011 to clear the slate on its inspection history. The payment included citations for failing to distinguish between wheelbarrows full of excrement and carrots.

"We didn’t agree with 90 percent of the violations we were cited for, but we weren’t in a position to pick and choose," Feld spokesman Steve Payne said.

The real object of the WAAAs ire is a legal training tool.

Ringling doesn’t want to see people stampeded, so its handlers carry pointed fiberglass sticks to direct the animals. The two sides can’t even agree on the instrument’s name. WAAAs call it a bullhook; Ringling personnel, a guide. I call it what it is: a fire poker for children. I handled several of them during my stay and each was short, lightweight, and, contra WAAA claims, blunted.

"Everyone always does that when they see them," Ringling handler Joey Frisco said as I thumbed the edge of his poker. He didn’t ask me to ease up when I wacked my forearm, nor did he have to: It’s as harmless as a Facebook poke (and less creepy).

Ringling’s Blue, Gold, and Red tours perform in front of 10 million people in 45 cities each year. Joey and his father Joe Sr. oversee Blue’s seven elephants. The Friscos accompany them onstage, watch them play in the Miami rain, then sleep in trailers mere feet from the animal tent.

Joey took me through the basics of the poker. A tap to the back of the leg or under the chin goads the elephant forward, while the top of the back means lie down. WAAAs have released selectively edited footage of handlers striking elephants on the head. While the videos can cause a human to wince, the thick-skinned—and thick-skulled—elephants barely feel it.

"No one loves these gals more than I do. The idea that this little thing can hurt them is laughable," Joey said.

The next day I drove four hours north to Polk City, Fla., to meet Janice Aria, director of Ringling’s Center for Elephant Conservation.

Only one-third of Ringling’s 43 elephants tour. CEC staff, seven of whom live on site, care for the rest—babies, retirees, and adult males. Ringling spends $65,000 per elephant each year, regardless of performance ability. Post-pubescent males are especially problematic. They’re too volatile for the road and too territorial to live with others. Ringling has the highest population of males in the West, rendering the 200-acre compound a money pit.

"The minute a male is born … it’s $1 million right off the bat to build him a barn," Aria said. "We’re closed to the public, so there’s no revenue coming in."

The CEC is all shale roads and lowland pastures surrounded by protected wetlands. Retired divas lounge in the sun surrounded by flimsy cattle wire. They don’t show much interest in escaping. Younger females live in group barns with their children, while males spend their days doing guy stuff: Playing with tires and threatening anything that approaches.

Osgood, a.k.a. "Ozzie," is the worst offender. He paced our golf cart up the cage before popping into a headstand worthy of a grand finale. After a minute, the 13,000-pound animal headbutted the ½ inch steel bars with a frightening amount of force.

Ozzie is immune to the poker, but vets still inspect him daily. Staff members carry the instrument as a symbol of authority, a teacher with a yardstick long after the days of corporal punishment.

"You need a tactile back up … because they respect it," Aria said. "It breaks my heart that this essential tool has become the vanguard of the people that hate us. None of those people has ever walked an elephant down a city street."

Elephants are not necessarily gentle giants: Sri Lanka, which just emerged from a 26-year civil war, now faces a "human-elephant conflict." At least 5,800 elephants and 21 million people call the island home, making it among the most densely populated nations in the world. Humans kill nearly 200 native elephants annually despite the fact that only 7 percent have the ivory tusks coveted by poachers.

"When this animal can come in and wipe out a year’s crop overnight, farmers are left with no choice," Aria said. "There’s not an Asian elephant [alive] that’s not in some man-managed situation. People perpetuate this fantasy of the wild … the reality is brutal. 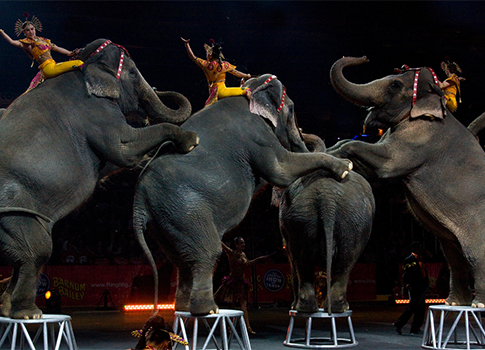 THE CEC HAS BIRTHED 25 ELEPHANTS SINCE 1996, including the 18th successful elephant artificial insemination in history.

I met Barack a day shy of his fourth birthday as he rolled a ball with his trunk. Though a "natural performer," Ringling removed him from tour after he hit puberty in 2012.

The two-ton toddler has cheated death three times, starting with his Jan. 19, 2009 birth. Joe Frisco Sr. spent 10 minutes administering mouth-to-trunk resuscitation before "Rocky" took his first breath. The baby later overcame two bouts of non-STD herpes, an affliction that Ringling vets also helped his father survive. Herpes kills 80 percent of victims, but Ringling hasn’t lost an animal to it nor has the CEC lost a baby in childbirth, a common occurrence in nature.

"He wouldn’t be alive if he was in the wild," Aria said.

"At the end of the day, we just want to make sure that there is no … animal cruelty in our jurisdiction," council deputy Jeffrey Ebenstein said.

I did not see any protesters at the Miami performance, but not everyone was comfortable with the show.

"I wasn’t allowed to go as a kid—animal cruelty, you know," one first grade teacher told me.

She ticked off WAAA talking points verbatim: The tricks are unnatural, the cages dirty, the trainers verbally and physically abusive. She’d never seen an elephant, nor could she describe "natural behavior." If I was going to listen to ignorance, I decided to get it from the kids.

"What do you want to see today?"

Elephants, tigers, clowns, they shouted over each other. One child pushed a smaller classmate forward.

The boy, we’ll call him Giovani, loved the lion act. I asked if he thought the animals got hurt. "Maybe the sticks, but it’s good they have them. [Lions] could eat you."

The teacher had had enough. "Get back in line and hold your partner’s hands," she screamed repeatedly for 20 seconds.

There they were. Holding hands, silent, submissive. Ready to march again at her command. 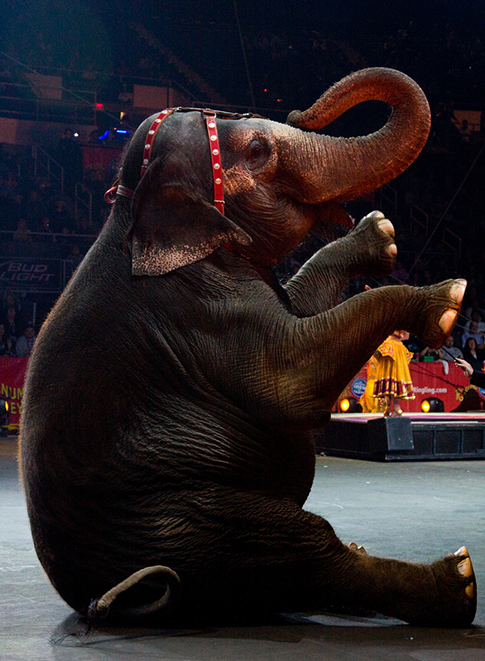