Fox News contributor Alan Colmes passed away on Thursday at the age of 66 after he reportedly battled a brief illness.

"We have, yet again, some sad news to report here at the Fox News Channel," Hemmer said. "Fox News contributor and frequent guest here in ‘America's Newsroom,' Alan Colmes, has passed away."

Colmes leaves behind his wife, Jocelyn Crowley, who issued a statement to Fox News earlier on Thursday morning.

Alan Colmes passed away this morning after a brief illness. He was 66-years-old. He leaves his adoring and devoted wife, Jocelyn Elise Crowley. He was a great guy, brilliant, hysterical, and moral. He was fiercely loyal, and the only thing he loved more than his work was his life with Jocelyn. He will be missed. The family has asked for privacy during this very difficult time.

Hemmer then played a tribute package narrated by Colmes' former co-host, Sean Hannity, on "Hannity & Colmes." The political debate show aired nightly on Fox for over a decade from 1996 until 2009.

"When Alan and I started ‘Hannity & Colmes,' there wasn't a day that went by where we didn't say we were the two most fortunate men in all of television," Hannity said.

Hannity, 55, told Fox News in a statement that Colmes was "one of life's most decent, kind, and wonderful people you'd ever want to meet."

Following the news of Colmes passing away, several journalists and former colleagues from the network shared their condolences, as they reflected on what he had contributed to their daily lives.

Goodbye to Alan Colmes, a generous and wonderful man who was the first to fight the good fight on FNC.

Shocked to hear of the passing of Alan Colmes. Thanks for providing great perspective on the stories of the day.

Alan Colmes was an incredibly talented media personality but he was also my friend & a mentor.Saying he will be missed is an understatement.

Very sad to report our friend and colleague @AlanColmes has passed away.

I can tell you tears r flowing @FoxBusiness @FoxNews right now. We are all devastated by the loss of kind soul @AlanColmes may god bless RIP

So sad to hear of the death of Fox News colleague Alan Colmes. He and I agreed on little, but I liked him immensely. Good guy. R.I.P.

Did a lot of work with Alan Colmes at Fox. Great guy, so smart, an absolute pleasure to debate and work with. Rest in peace, my friend.

Alan Colmes was a bright, funny, and gracious man who compiled a substantial and valuable body of work as a broadcaster and interviewer. RIP

Just heard of death of Alan Colmes; the kind of liberal I loved-smart, witty, and fair; never backed up, but always backed up his views. RIP

RIP @AlanColmes. Shock. While is disagreed with him on many things he was a good and decent man. Indeed, all that matters in the end.

Remembering @AlanColmes who passed away at 66, a funny, smart, passionate broadcaster who was beloved by all. Rest In Peace, Alan

R.I.P Alan. I was just on his radio show a few weeks ago. From @seanhannity & @AlanColmes-he's been at @FoxNews since the very start https://t.co/zxW1ZABVGD

Very sad to report our friend and colleague @AlanColmes has passed away. Alan was one nice, happy bright light. RIP AC.

I'm heartbroken. @AlanColmes was my fellow liberal colleague at Fox News. I admired his tenacious work ethic. He was a good man. RIP Alan.

Alan Colmes was a dear friend and I will miss him and our talks.We spoke every Thanksgiving and Christmas…RIP my friend @FoxNews

In addition to being a contributor on various Fox News shows, Colmes hosted the nationally syndicated "Alan Colmes Show" on Fox News Radio. On Jan. 30, he addressed his listeners with a note on his website explaining his absence.

"As I previously mentioned on the show last year, there would be times I would be taking off from the show to deal with a medical issue. This is why I've been out recently and will be out this week as well. But I will be back taking your calls as soon as I can," Colmes wrote. 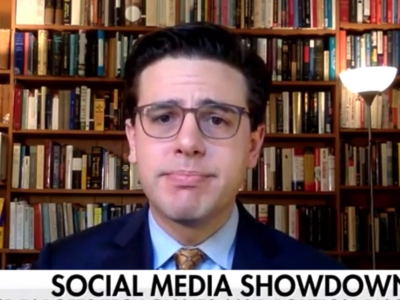 Continetti: ‘Break Out the Popcorn’ for Liberal Infighting