Garland burst onto the scene in 1997 with his best-selling book, The Beach. It was an impressive debut, both as a piece of storytelling (the book is nothing if not propulsive) and as an examination of a time and place in history. There hasn’t been a better book written about the generation that entered adulthood during our 'holiday from history."

The Beach is about a troupe of Gen Xers who search for a mythical beach in Thailand unspoiled by the ravages of tourist backpackers. Self-medicating with copious amounts of weed, addicted to video games, theirs is a generation adrift, bored, and in search of something new. Or something old, as the story’s main character, Richard, is both haunted and roused by the specter of Vietnam.

He and another traveler, Etienne, discuss their ennui in the book’s early going:

'Yes, we went on a trek. We rafted on a river. Very boring, no?" [Etienne] sighed and leaned backward, resting his back on the stone step behind him.

'I think this is why we come here." He pointed around the corner of the police station, toward the Ko Sanh Road. 'We come for an adventure, but we find this."

Etienne and Richard find their adventure: The Beach. It is an idyll out of time, but one that represents the sense of dislocation that pervaded the world at that specific historical moment—a fact doubly true when one looks back on the book now, 18 years after publication.

There are only two dates referenced on The Beach. The first is the year of the beach commune’s founding, 1989, which the characters refer to as 'Year Zero." The second date is mentioned after a pair of calamities, leaving death and disease in their wake. It comes when The Beach’s leader, Sal, addresses its inhabitants:

'So the way I see things is like this. We’ve had two severe disasters over the past week. First there was the food poisoning and then we had the unspeakable tragedy that has collected us here now. … Now, dates don’t mean much on the beach, but I keep a calendar. And it may interest you to know that the date is September the eleventh."

The Beach was adapted for the screen by John Hodge and directed by Danny Boyle, who would go on to win a best director Oscar for Slumdog Millionaire. Before that, however, Boyle would team up with Garland for a pair of sci-fi flicks: 28 Days Later and Sunshine.

28 Days Later, released in the United States in 2003, reinvigorated the moribund genre of zombie flicks. It was a movie well suited for the time, about (environmentalist) terrorists bringing the end of civilization. There’s a reason zombies have proliferated on screens large and small: the idea of an unstoppable, immovable horde ceaselessly swarming strikes a chord with audiences facing economic stagnation at home and endless war abroad, problems over which they seem to have no control.

Something similar is at work in Sunshine (2007), an underrated and under-seen art house sci-fi flick chronicling the efforts made by a team of astronauts to jumpstart the sun. A bit more optimistic than 28 Days Later, perhaps, Sunshine posits that even when everything goes wrong—even when your mission goes off course and your ship gets invaded by an irradiated mad man driven insane by staring into the sun for too long—nothing is hopeless with a dash of courage and a bit of effort. Not even reversing global cooling. 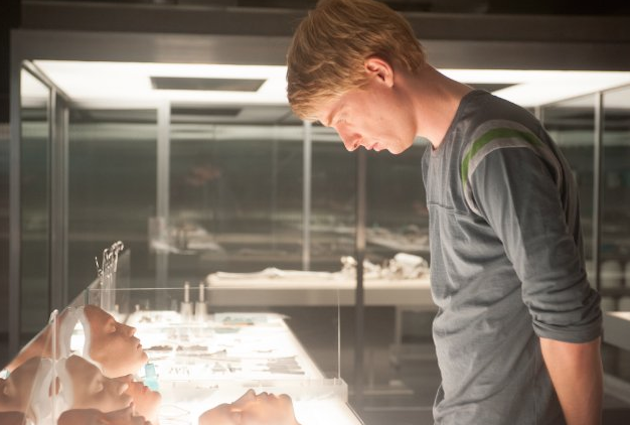 Which brings me to Ex Machina, Garland’s directorial debut. It, too, is a movie of the moment, a film that thoughtfully considers some contemporary dilemmas without being pedantically boring about it.

Caleb (Domhnall Gleeson) is a programmer at the Google-like search engine company Blue Book who, as the movie begins, discovers that he has won a company-wide raffle to spend a week with his reclusive CEO, Nathan (Oscar Isaac). After a brief getting-acquainted period, Nathan presents Caleb with 'the mother of all NDAs" and bullies him into signing it.

This isn’t your father’s Turing Test: Nathan knows that Ava’s language skills are more than advanced enough to break that barrier. Rather, Nathan wants to know if Caleb thinks Ava actually thinks. Does she feel? Is she self-aware?

Or is she simply engaging in a clever simulacrum of thought? And perhaps most importantly: Does it matter either way?

Caleb quickly grows attracted to Ava, who has a human face but a body that reveals her electronic innards. And she convinces him to distrust Nathan, a hard-drinking brogrammer with a permanent smirk and the limitless confidence of one who doesn’t get freaked out when he’s compared to the gods.

Nathan is easy to distrust. Every room in his home is locked and Caleb’s key card can only open a few of them. When the power goes out, as it mysteriously does once or twice a day, Caleb is confined to whichever room he happens to be in at the time to prevent him from poking around. We see Nathan secretly watching Caleb and Ava’s interactions, jotting down thoughts on Post-It notes and sticking them to the wall.

Garland taps into fears about the accumulation, and manipulation, of our entire life’s data by privately held, oversight-free tech companies. It’s not an unreasonable apprehension: As James Barrat notes in Our Final Invention: Artificial Intelligence and the End of the Human Era, the most rapacious devourer of our personal data, Google, is in all likelihood engaging in AI research as part of its semi-secret Google X project.

Will our own data, even our own faces, be used by a megalomaniacal tech genius to develop the next iteration of intelligent life on Earth? It’s not the most far-fetched thing I’ve ever heard, and it’s a problem worthy of serious thought and art. And Alex Garland, the auteur of anxiety, is just the guy to tackle the job.