More than three decades ago, a professor of mine commented about the futility of learning about the horror of the Josef Stalin years in the Soviet Union by reading Aleksandr Solzhenitsyn’s Gulag Archipelago. "The numbers are mind-numbing," he said. "It’s like reading a telephone directory [this was back in an era when we all still had those monstrosities with a yellow cover] because you cannot comprehend the numbers of victims—millions of them. If you want to understand the Stalin years, read One Day In The Life Of Ivan Denisovich, because it is a story based on one person and that person’s single day in a Soviet Gulag—this is something that we can all relate to."

Hyeonseo Lee’s story of escaping North Korea is just such a narrative. It is one person’s harrowing journey of managing somehow to overcome impossible obstacles and a series of perilous, near-death experiences in order to win freedom not only for herself, but also for her family. Readers of this book will take away a far greater understanding of the pervasive terror that is daily life in that country, but will also come to the conclusion that she is one of the bravest people they are ever likely to read about.

The Democratic People’s Republic of Korea (DPRK), the official name of the North Korean regime, takes the "cult of personality" approach practiced by Stalin or Albania’s Enver Hoxha to an unimaginably grotesque extreme. For example, by law the most important possessions in any home anywhere in the DPRK were the two framed portraits of the nation’s founder, Kim Il-sung, and his son, Kim Jong-il. These twin, heavily air-brushed photos were not only required to be displayed in private residences, but they "hung like icons in every building I ever entered," Hyeonseo writes.

These portraits are the most basic example of how thoroughly the regime in the DPRK penetrates and controls the daily lives of its citizens. The framed photos "had to be the highest objects in the room and perfectly aligned." There were draconian penalties for failing to observe these regulations or neglecting to clean the portraits properly.

"About once a month officials wearing white gloves entered every house in the block to inspect the portraits," she writes. If any given household failed to display them properly, that family could be thrown into a labor camp. "We once saw them shine a flashlight at angle to see if they could discern a single mote of dust on the glass," she recalls.

At age seven, Hyeonseo was introduced to the brutality of the DPRK state when she witnessed her first public execution, a series of hangings that took place across her city. It was the first in a string of similar incidences—including executions by firing squad—that she would be subjected to for the next decade. Attendance at these demonstrations of the regime’s power of life and death were obligatory, including elementary school students. Classes would be cancelled and factories would be idled so that the population could be shown the fatal consequences of acting in contradiction to the teachings of "the Great Leader," Kim Il-sung.

But it was another kind of death that shocked Hyeonseo into understanding the reality of the DPRK. One day, at age 15, her mother handed her a letter from a co-worker’s sister that read:

By the time you read this, the five of us will no longer exist in the world. We have not eaten for a few weeks. We are emaciated, though recently our bodies have become bloated. We are waiting to die.

This was the period known in the DPRK’s history as the "Arduous March," a deadly famine that began in 1994 after the death of Kim Il-sung and the accession to the post of "Great Leader" by his son, Kim Jong-il, which continued through 1998. This famine was brought about by the abject failure that is the perennial consequence of state-managed agriculture in communist regimes, plus a drop-off in food aid from Moscow following the collapse of the Soviet Union. Estimates for those who died from starvation, disease or other causes due to a lack of any food stocks during this time vary between 250,000 and 3.5 million.

The actual numbers of deaths are not known because the Kim Family Regime (KFR)—as the U.S. military refers to it—that runs the DPRK does not permit international relief agencies to operate in a manner that would allow them to collect accurate data. Like the millions gassed in concentration camps such as Auschwitz-Birkenau, those who perished in the Soviet Union’s death camps in frozen wastelands like Kolyma, or the wholesale executions of Cambodia’s Killing Fields—all mass-murder on a scale only discovered long after the fact—these horrors have been hidden from the world’s prying eyes. The actual extent of the deaths from this Asian holocaust will only be known some day in the future when the Kim dynasty implodes and the state collapses.

At the height of this famine Hyeonseo made a trip to one of her aunts in Hamhung. "It was a journey through the landscape of hell," as she describes it. "For miles around individual people dotted the open countryside, roaming listlessly like living dead, foraging for food … order was breaking down everywhere. Soldiers turned thieves. Police became muggers. The trains ran to no timetable."

People fighting to get on trains to escape to another province where they hoped to find food became savagely and deadly brutal. "When I arrived at [my hometown] Hyesan Station a man was lying on the platform with the top of his head so badly smashed part of his brain was exposed. He died a few moments later."

Hyeonseo’s home in Hyesan sat on the Yalu River that separates the DPRK from the People’s Republic of China (PRC)—close enough to throw a rock across the border. At night the neighboring Chinese county of Changbai shown in the distance as a magical fantasyland of brilliant lights. China was an irresistible lure to a young girl living in a North Korea that was as starved for electricity as it was of food. 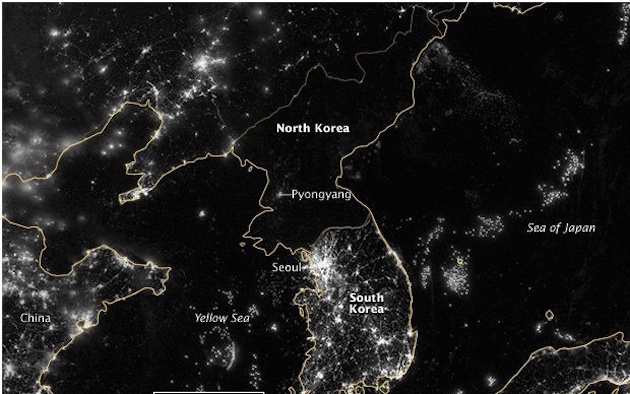 On one subzero night in December at age 17 she decided to cross over into China, curious to see what was on the other side—that land that shown so brightly with street lamps, automobile headlights and neon signs at nighttime, while North Korea was covered in darkness. Walking over the frozen river she entered the PRC, intending to sneak back across to her home in a few days after looking around at this alien world.

It would be more than a decade before she would return to spirit her mother and brother out of the DPRK to join her in a new life in the Republic of Korea (ROK) in the south. Her journey from this day forward is a monument to her personal courage and the incalculable agony and danger faced by North Koreans trying to escape the poverty and deprivation of their country.

Just to cross into China does not mean one has escaped the horror of life in the DPRK. PRC authorities are cheerful co-conspirators with the regime back in the DPRK when it comes to murdering North Korean citizens. If the Chinese police discover North Korean refugees they deport them back home, where they face imprisonment in a labor camp or sometimes public execution for attempting to flee their country. The title of Hyeonseo’s book, The Girl With Seven Names, denotes the number of times she had to change identities in order to avoid being arrested and deported.

DPRK defectors face their own Arduous March in the form of a trail through which they must then get in, and then out of, China, after which they must embark on a tortuous underground railroad that runs through Laos and other parts of Southeast Asia. Once outside of the PRC, many are victimized by carnivorously corrupt authorities. Getting through safely to South Korea can be like winning the lottery.

Today, Hyeonseo, her American husband, Brian, and her family live in Seoul. In June of this year she celebrated her brother being accepted into university in the United States. But it was a celebration that had to be conducted covertly.

"I cannot mention his name or where he has been admitted or anything about him in interviews or on social media like Facebook," she said sadly when she spoke to me recently by phone. "The North Korean regime retaliates against defectors when they know their details of who they are, where they live, etc." Recently there was even a video released in South Korea of an unsuccessful assassination attempt by DPRK agents on another defector as punishment for speaking out about life back in the "Kim Family’s paradise."

Hyeonseo is no exception in this regard, and lives in constant fear of retribution for speaking out. The publication of this book is almost guaranteed to move her name up toward the top of the DPRK’s "most wanted" list, and yet she continues to make personal appearances across the globe to raise awareness of what is happening in her country.

Despotic regimes with a talent for murdering millions of innocents occur all too frequently in an age when such places are no longer supposed to be able to exist. We owe a great debt to witnesses of these crimes against humanity like Hyeonseo. It is only through their testimony that those responsible can someday be brought to justice. This book is not just the history of one girl’s dramatic escape. It is a memorial that honors the memory of the many dead and the even millions more still suffering under the current North Korean regime. It is a story that needs to be told over and over until change finally comes to this long-suffering nation.

Neither Shaken Nor Stirred

Scenes from the Supply Chain