Feature: How the Golden Age movie star can change your life

Part of it is his sense of style. Even as we mark the 30th anniversary of his passing this November, his films, to say nothing of the article he penned for GQ, still provide stylistic inspiration. "I've purchased dozens of suits over the years and they all have one attribute in common," Grant wrote many years ago. "They are in the middle of fashion. By that I mean they're not self-consciously fashionable or far out, nor are they overly conservative or dated." One can only imagine what Grant would think of the cuffed-skinny jean clad hipsters! 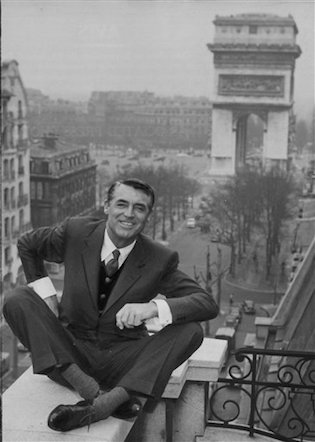 Cary Grant gives a press conference at the Raphael Hotel, in Paris, in 1956 / AP

His sense of balance was not limited to dress. Toward the end of the article Grant takes this "middle of fashion" piece of advice a step further: "In all cases, the most reliable style is in the middle of the road—a thoughtful sensible position in any human behavior. Except perhaps on the freeway—but, even then, the middle lane, providing of course, it's on your side of the road, usually gets you where you're going more easily, comfortably, and less disturbingly." Grant never called himself an Aristotelian, but he’s describing what we recognize as "the Golden Mean."

The basic premise behind it is this: all virtues exist on a scale, and in excess or deficiency, these qualities are no longer virtuous. For example, too much courage becomes recklessness, while too little leads to cowardice. The sweet spot is somewhere in between. This idea can be applied to all other virtues as well. Too much ambition leads to a hunger for power, while too little can turn you into a couch potato. Too much confidence becomes arrogance, too little becomes meekness. Cary Grant didn’t just live by the Golden Mean of fashion. He found the Golden Mean of manliness.

Quick Cary Grant 101 for those of you who, to your eternal shame, are not familiar with him. Grant was an actor whose career spanned from the 1930’s to the early 1960’s. In that time, he established himself as a premier leading man in cinema, starring in films such as Charade, The Philadelphia Story, and North by Northwest. He is widely considered one of the best actors of all time, and was awarded a Lifetime Achievement Oscar. Yes, critics point out that he was voted only the second greatest Golden Age actor by the American Film Institute. Humphrey Bogart won first place. Bogie’s a good actor and all, but only a hardcore Bogart fan would rather watch The African Queen than a Cary Grant flick like To Catch a Thief or Arsenic and Old Lace. Never fear, Grant was named the greatest actor of all time by Premiere magazine. 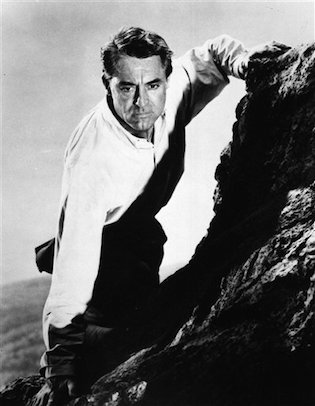 The archetypal Cary Grant role is a natty dresser with a quick wit and perfectly coiffed hair. He was put together and supremely confident in his own skin without being flashy. A Grant character never sought adventure or attention. These things just happened to him. There was something conservative about him, a sort of reserve. Yet Grant’s on-screen persona wasn’t like the gee-whiz, aw-shucks, bashful Boy Scout of Jimmy Stewart. He was manlier than that, more confident than that. But neither was he a hardened, man’s man like John Wayne. Grant was a happy medium, the perfect gentleman who still maintained raw masculinity and sexual charisma. His characters were manly without being brutish, classy without being foppish.

In His Girl Friday, Grant played a fast-talking newspaper editor named Walter Burns. Burns is a larger than life figure based on Walter Howey, who worked under William Randolph Hearst. Burns is an alpha male, absolutely in control in all situations, even in one scene where the sheriff and mayor threaten him. But the role is memorable for its rat-a-tat-tat dialogue, with Grant and co-star Rosalind Russell exchanging one-liners and zingers at lightning speed. Humor is a defining feature of the Grant persona, with Grant once again applying that same middle-of-the-road approach. He had a mastery of all aspects of humor, including the physical, courtesy of his time as a circus acrobat. Grant could mock Ralph Bellamy one moment, and trip over his own feet the next. This balance between highbrow humor and slapstick made Grant look like a worldly man who didn’t take himself seriously, adding to his charm.

Grant’s characters rarely took the initiative with his leading ladies. In her profile of Grant for The New Yorker, Pauline Kael said of him, "Willing but not forward, Cary Grant must be the most publicly seduced male the world has known." Grant’s characters were never aggressive toward women. He would show interest, yet more frequently than not he would simply allow things to fall where they may. One of Grant’s first major roles was in She Done Him Wrong, in which he played opposite Mae West. West’s character pursued Grant, famously remarking in the film, "Why don’t you come up sometime and see me? I’m home every evening." Grant’s reply: "Yes, but I’m busy every evening." Grant’s women were never objects to be conquered, but individuals with whom he could banter, equals with whom he could spend time. Of course, he’d invariably end up with them anyway.

Grant is appealing because he represents an ideal of virtue as moderation. So compelling was his balanced, prudent, controlled screen persona that even he wanted to live up to the ideal he had created. As he famously remarked, "Everyone wants to be Cary Grant. Even I want to be Cary Grant." Can you blame him?