Black Mass is an oddly plotted mob movie that lacks a strong narrative arc or a consistent point of view. It’s also a gripping character study and the best-acted film of the year so far, an unnerving look at the pursuit of power.

Johnny Depp stars as James "Whitey" Bulger, a small-time hood who becomes a major player in the Boston mob scene after crafting an alliance with John Connolly (Joel Edgerton), another kid from Southie who joined the FBI. The feds want the mafia taken down, and John comes up with the bright idea of empowering the Irish mob to get the job done. Jimmy (don’t call him Whitey: "That’ll just get you a smack") can’t stand rats, but infahmin’ on invading enemies like "the Brits in the Six Counties or the dagos in the north end" isn’t ratting. It’s strategy.

Bulger, whose brother Billy (Benedict Cumberbatch) serves as a state senator, is a man about town, hanging out at the local and helping old ladies cross the street and viciously murdering anyone who crosses him. Depp’s onscreen visage is captivating, aided in large part by off-putting light blue eyes that call to mind a Siberian husky and a dead tooth that grays as the film goes along, a physical manifestation of his corrupt soul.

A "Black Mass" venerates Satan. Depp’s Bulger is a magnificent devil, debasing everyone who comes into his orbit and exploiting the weakness of men to cover for committing robberies and collecting souls. Edgerton, fresh off the surprise critical and commercial hit The Gift, plays Connolly with a beady-eyed naiveté, as someone who thinks he can control a mad dog he’s let off the leash.

Indeed, from top to bottom, the cast excels: Jesse Plemons, Peter Sarsgaard, Kevin Bacon, Adam Scott, and Corey Stoll headline a top-notch group of actors. I wonder if the surfeit of acting talent may have harmed the story: There’s no through-line to Black Mass, it’s a two-hour catalogue of Bulger’s sins.

I feel as though the film may have been better served being about Connolly, his rise and fall, about a man desperate to save his city from outside crime bosses who don’t care about the people of Boston. However, Depp’s brilliance and director Scott Cooper’s (understandable) reluctance to take the camera off of him unbalances the whole thing: Imagine The Dark Knight, but with The Joker onscreen for two-thirds of the two-and-a-half hour running time instead of 30 minutes or so.

We don’t even leave the film with a good sense of what Bulger really did. There’s a whole subplot about Jai Alai that your humble reviewer found borderline incomprehensible, having something to do with skimming money out of the franchise and bumping off the owner when he got wise to the grift. Perhaps the infiltration of the professional Jai Alai circuit by Boston’s Irish mob is common knowledge, but the few things I know about the sport I learned from brief references to it on Mad Men several years ago.

The sloppy treatment of Bulger’s criminal exploits is in stark contrast to the portrayal of the Lufthansa Heist in Goodfellas or the introduction of smack to New York City in The Godfather. As impressive an actors’ showcase as it is, Black Mass is, unfortunately, a rather weak "mob movie." 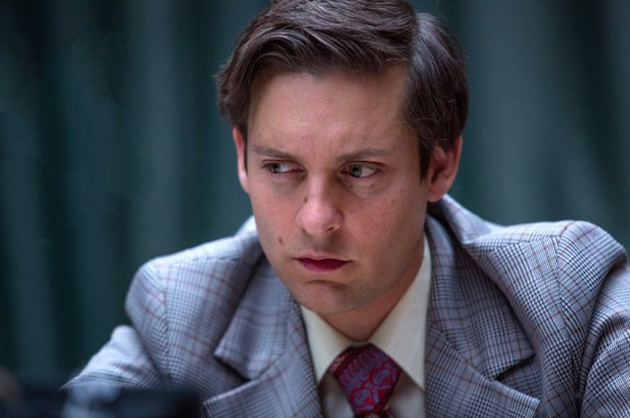 Pawn Sacrifice suffers from the opposite problem of Black Mass. Director Ed Zwick and writer Steven Knight imbue the enigmatic mental case Bobby Fischer with almost too much meaning, using the chess champion as a lens through which to view the Cold War.

We open on Fischer as a child, where his single mother is hosting a party for local communists. After spotting a car full of cops outside their house keeping an eye on the dirty Reds inside—this is the late forties, after all—Fischer snitches on them to his mom, a good Commie who tells her kid never to rat on their Bolshevik friends. Still, he can’t sleep, agitated by the fact that his mom seems more interested in lifting up the proletariat than spending time with him. To take his mind off his worries, he focuses on a chessboard in the corner and starts running through moves.

In a short span of time he is revealed to be a prodigy. Fischer (Tobey Maguire) is the only American with a chance of beating the long-dominant Russian masters in single combat, thus opening a new avenue in the Cold War.

Whereas the Russians—led by the calm, collected, rock-star-like Boris Spassky (Liev Schreiber)—have the backing of their nation, Fischer is on his own, at least at first. It’s not until a patriotic lawyer named Paul Marshall (Michael Stuhlbarg) and a chess-obsessed priest named Father Bill Lombardy (Peter Sarsgaard) start pulling some strings that Fischer gets the financial help he feels he deserves.

For Fischer, it’s all about winning—and being properly compensated. Zwick and Knight do a good job of refusing to romanticize Bobby Fischer, who notoriously spiraled into mental illness and anti-Semitism as the years progressed. But by shoehorning him into a narrative about the broader Cold War—replete with montages of the 1960s, discussion of nuclear war, etc.—some of the personal tragedy gets lost. Was Bobby Fischer driven crazy by the pressure of the Cold War or was he simply an ill-mannered jerk with a variety of mental problems?

Pawn Sacrifice certainly has its pleasures. Histrionic Tobey Maguire is my least-favorite iteration of the actor, but he is certainly believable as the prodigal loon. Stuhlbarg and Sarsgaard excel as the Bobby Whisperers, ably representing both the macro geopolitical issues and the micro moves on the chessboard. And Zwick deserves kudos for rendering actual chess matches competently and compellingly, no mean feat for a rather static exercise.