Hollywood director Joss Whedon on Thursday mocked a photo of House Speaker Paul Ryan (R., Wis.) meeting with teenage childhood cancer survivors, joking that Ryan was rating their attractiveness while in search of a new wife for President Trump.

Ryan tweeted a picture of him meeting with the cancer survivors in Washington, D.C., praising their "powerful stories." The teens came from One Step Camp, an organization run by Children's Oncology Services, Inc. in Chicago, according to BuzzFeed News.

Advocacy is not limited to adults. These Wisconsin teens shared some powerful stories with me about their fight against childhood cancer. pic.twitter.com/VJ0eQDXu7U

Some of our campers had an opportunity to meet with @SpeakerRyan & advocate for pediatric cancer research! #OneStepCamp pic.twitter.com/IAtogR1ioT

Whedon, who directed The Avengers and created the television series Buffy the Vampire Slayer, took a different tone than Ryan, tweeting the same picture with a comment about Ryan judging the girls' levels of attractiveness. 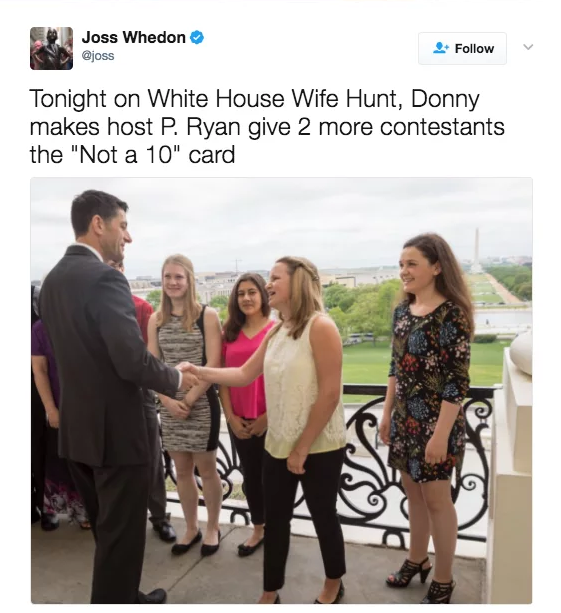 @joss Dude, they're childhood cancer survivors, what the hell is wrong with you? https://t.co/MyybidzZ1P 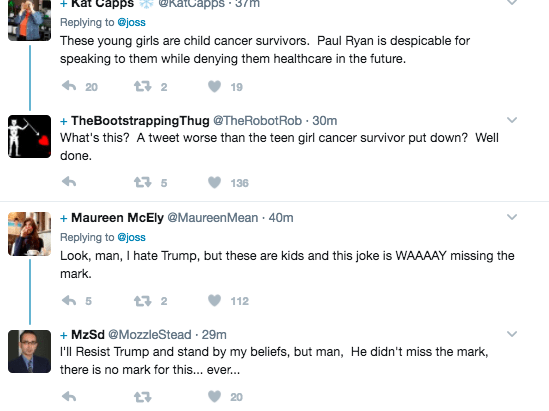 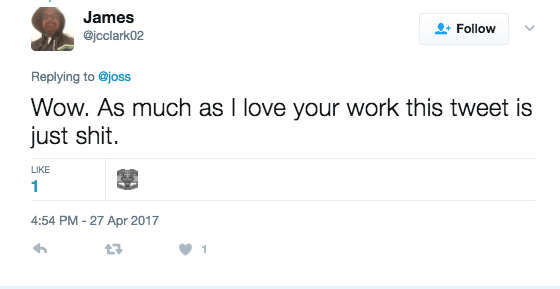 So I tweeted something that inadvertently offended everyone except the people I was trying to offend. I'm sorry. I'll be quiet for a bit.

Thursday was not the first time Whedon has gone after Paul Ryan. In January, the Hollywood director, an outspoken liberal and anti-Donald Trump activist, said that he wants "a rhino to f**k [Ryan] to death with its horn because it's FUNNY [sic]."

Violence solves nothing. I want a rhino to fuck @SpeakerRyan to death with its horn because it's FUNNY, not because he's a #GOPmurderbro

Whedon also said days after the 2016 presidential election that Trump could not be allowed to serve a term in office.

This is simple: Trump cannot CANNOT be allowed a term in office. It's not about 2018. It's about RIGHT NOW

Two months earlier, Whedon wrote and directed an anti-Trump video, gathering Hollywood stars to encourage Americans not to vote for the Republican candidate.

Cruz: Twitter CEO Will Be Subpoenaed Over Hunter Biden Censorship