Feature: What I saw at the closing of the Trump Taj Mahal

Four people assemble for a photo before a grand fountain in the shadow of minarets for a Sunday afternoon wake. A single yellow taxi, an SUV, sits in the background. The shoot takes maybe thirty seconds, a minute tops, as they pause to let the Atlantic City breeze whip past them on this grey day. Another cab, this one a dark minivan, joins the queue. They sit idle. So does the fountain that welcomed fleets of taxis and valeted cars, celebrities, card sharps, and amateur aspirants to the Trump Taj Mahal.

It is "an awe-inspiring architectural masterpiece…unprecedented in craftsmanship and opulence," the largest and, at $1.1 billion, the most expensive casino ever built when it debuted in 1990. The casino that opened with Donald Trump giving a personal tour to Michael Jackson trailed by Robin Leach will close in 14 hours and the only celebrity on hand to witness it is Triumph the Insult Comic Dog.

It is already peaceful in Atlantic City, a ghost town with Cash 4 Gold dens instead of tumbleweeds littering the streets. The walkways are deserted at the Taj Mahal, ditto the golden escalators, the largest poker room on the East Coast, and the two roulette tables that spin silently beneath the golden mirror ceiling and 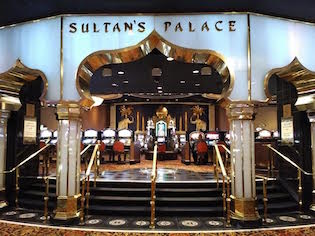 Austrian crystal chandeliers. The pit bosses have lowered minimum bets to entice some action at the card tables, but the croupier clad in a faded gold uniform stands alone at a $10 Three Card Poker table and only a handful of people play $5 Spanish 21. Groups of slot machines are wrapped in yellow crime scene tape, shipping orders taped to the blacked out screens. One woman sits in the glow of a slot machine in gold-embossed Sultan’s Palace, which is reserved for Platinum Slot Players.

Like any celebrity funeral, Trump’s should have attracted throngs of gawkers, memento hunters, and peddlers hawking unlicensed "RIP Taj Mahal" t-shirts to tourists on this historic day, but closures have become routine in Atlantic City. It has lost four other casinos, including Trump Plaza, in the years since Pennsylvania and Maryland legalized gambling to fill tax coffers. The Taj entered bankruptcy less than two years after it opened and Trump Entertainment Resorts went bust two more times before he lost his ownership stake in the publicly-traded company during a 2009 bankruptcy restructuring. The only mourners at this wake are the casino’s most intimate relations.

Lorraine Frame has made regular trips to Atlantic City from Verga, N.J., 60 miles to the west, since 1967 and has been coming to the Trump Taj Mahal since its opening. It had "the best pools, the best buffet," and she’s emerged with an "even amount of money" from the slots and tables over the years. It wasn’t just luck that drew her to the Taj Mahal; the gold-plated Borgata, widely considered the death knell for the Taj when it opened in 2003, was "full of snobs." For all its Italian marble, English carpets, and claims of "Unsurpassed Elegance," Taj Mahal attracts a salt-of-the-earth blue collar crowd, the same one that propelled Trump to the Republican nomination, according to Ms. Frame. She is disturbed by the turnout.

"It used to be you couldn’t breathe there were so many people on top of one another. Look how dead it is in here. You’d think it was already closed," Frame says. "This is the end of the [east] boardwalk."

A woman in a sweatshirt approaches. "$5.63 comp," she says, shaking her head. "That’s a sucks comp." Lorraine brought her daughter-in-law Loretta to mark the passing of the Taj. She is sympathetic to Carl Icahn, the billionaire owner of the casino and Trump’s favored treasury secretary, but despises Trump.

"My aunt worked for Trump at one of his casinos. He stole her pension and went back to New York City. He’s not getting my vote," she says. 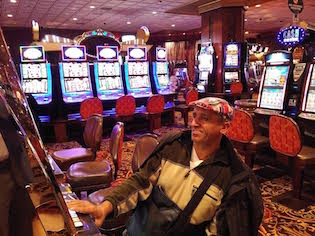 Ender Kiymaz came on the Taj Mahal’s final day to collect his win/loss statement. He took his golden membership card and brought it to guest services, which is manned by three people to handle the casino’s final comps and close outs before it shuts down at 5:59 a.m. Monday. He parks himself in front of a $1.50 slot machine. Kiymaz, an engineer for a rival hotel chain, started coming to the Taj Mahal 10 years ago after he and his wife became empty nesters. She died five years back.

"I don’t care how much I lose because I come here for the memories," he says.

He never stops pulling the lever during our five-minute interview. The cherries never line up, the bells never ring. He volunteers the win/loss statement. It says he lost more than $137,000 as of October 9. He has 13 hours to make it back, though he’s not concerned: "I can just write it off on taxes."

I leave Kiymaz and spot a man smoking a cigarette—the casino floor is a hodgepodge of smoking and non-smoking sections. I light up.

"Excuse me sir," he says. The man wears an ear piece, the woman a scowl.

"Why are you taking pictures and talking to our customers?" he says.

"Because I’m a reporter."

"You’re not allowed to be doing that here. Right now you’re in violation of DG—Department of Gaming—rules doing that," he says.

"I figured it was the last day…"

The blonde jumps in. "Well, we are still operating," she says. "And you’re not allowed to smoke in this section."

"I’ll put the cigarette out."

I get booted onto the boardwalk. The Taj Mahal sits immediately to the east of the pier where carnival rides once entertained children as their parents gambled away the college fund. The rides are dormant. Hurricane Matthew lends the area overcast skies and eight-foot waves, the crashes of which fill the vacuum of silence on the boardwalk. That and the bullhorn.

"All Day, All Night," the call goes out. 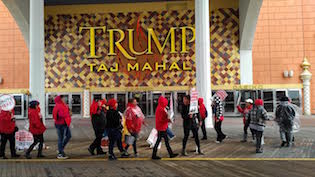 The woman behind the bullhorn is Christina Condos. She accidentally catches her thumb in the plastic chains wrapped around her neck during our introduction, but aside from that is a dream spokeswoman for UNITE HERE Local 54, which represents Taj Mahal bellhops, bartenders, and other employees. She’s a mother of four and cancer survivor who has been working at the Taj Mahal as a cocktail waitress since it opened. The union is 102 days into a strike. In May, the Supreme Court turned down its appeal of a bankruptcy court’s approval of Icahn’s decision to cancel health and retirement benefits to keep the company afloat. In August, the casino announced it would close, leaving 3,000 people out of work. Condos says the bankruptcy "is an orchestrated event" and expects Icahn to re-open the casino without union workers soon after the closure.

"They pay big bonuses and they take away the [benefits from] the middle class," she says. "We were willing to settle to get this done. Icahn is very difficult to deal with. It’s his way or the highway."

Ron, who declines to give his surname, sits outside the union’s makeshift tent. He wears a Marlboro jacket, smokes a Swisher Sweet, and says that he worked at the Taj Mahal for 10 years as a utility bartender in the 17-acre facility’s numerous restaurants and lounges. He laments Donald Trump’s exit from the company.

"When Trump had it we never had a problem with a contract," Ron says. 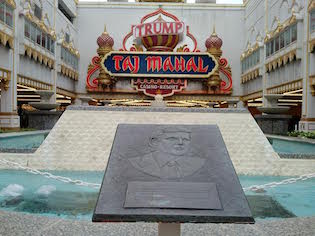 The union may be the only entity that does not begrudge Trump’s Atlantic City dealings. Trump stiffed contractors and bondholders who built and financed the casino, used the company to pay off personal debts and raise money for his Manhattan real estate deals, and loaded the company with debt before passing it on to Icahn, according to a June investigation by the New York Times. Trump’s publicly traded company never posted a profitable year and stock and bondholders lost $1.5 billion since the Taj Mahal opened in 1990. Through it all, Trump continued to rake in millions for himself.

There’s a waist-high plaque here, at the stagnant fountain, issued by a public housing complex.

"The trustees and residents of the Best of Life take great pleasure in honoring the kind and caring actions of this great humanitarian. He has provided amenities that enhance the quality of life for our residents," it says.

A bust of Donald Trump sits atop the scuffed text. He’s smirking.