The prominent diversity consultant Robin DiAngelo raked in $12,750 for a speaking gig last month at the University of Wisconsin—70 percent more than the other keynote speaker, black female author Austin Channing Brown.

The University of Wisconsin-Madison's Division of Diversity, Equity, and Educational Achievement paid Channing Brown just $7,500 for her keynote address at its annual Diversity Forum, receipts obtained by the Washington Free Beacon show. The payments were negotiated with the Harry Walker Agency, a New York-based speakers bureau that represents both women.

DiAngelo has called such inequitable treatment the racist heart of capitalism, claiming that "capitalism is dependent on inequality.… If the model is profit over everything else, you’re not going to look at your policies to see what is most racially equitable." As she writes in her bestseller White Fragility, she believes racism helps white people and hinders non-white people at every step of the employment process: "Whiteness has psychological advantages that translate into material returns."

The forum, which has run for two decades and attracts over 1,000 attendees, was this year streamed entirely on Zoom due to the ongoing pandemic. Almost every event from the two-day forum is available online, except for one panel and DiAngelo's keynote. Her address, the office of UW-Madison chief diversity officer Cheryl Gittens told the Free Beacon, was omitted because it uses a PowerPoint presentation "which is her IP." The talk, "Seeing the Racial Water," is one of DiAngelo's two "standard" keynotes.

DiAngelo and Brown did not respond to requests for comment.

The pair were the only two speakers paid for their appearances, Gittens's office told the Free Beacon, in accord with what it described as the school’s "practice" of only compensating keynote speakers. That means DiAngelo was also paid more than dozens of other minority presenters—a disparity that a devoted reader of her work would likely identify as racist.

The payments, revealed through a public information request, are just the latest example of the exorbitant rates DiAngelo charges for public lectures on "antiracism" and "white fragility," pop sociological concepts that have taken on new power amid America's current racial upheaval.

As her influence grows—DiAngelo spoke to the House Democratic caucus in June—so too do the payouts, with her average speaking fee up 125 percent since 2018 alone.

DiAngelo's fee from the UW-Madison event was smaller than many payments this year. She now notes in her "personal accountability" statement that her "average fee for an event" through August of 2020 was $14,000. Another recent appearance, at the University of Connecticut, would have paid $20,000, but was canceled, a UConn spokesperson told the Free Beacon.

DiAngelo's accountability statement has been updated extensively since a Free Beacon report in July on her ballooning wealth, an apparent attempt to swat down damaging revelations such as her sky-high speaking fees or her three homes worth over $1.5 million.

DiAngelo, who warns that the Free Beacon is a "far right" website, nonetheless confirms the accuracy of its reporting. The Free Beacon reported that she is paid up to $30,000 for a 60- to 90-minute speech. DiAngelo calls this figure "enormously misleading" before writing that her fees can in fact range as high as $30,000, "which is well within the standard range for a best-selling author who is in high demand."

DiAngelo also writes that she receives 7.5 percent royalties on White Fragility, just shy of the Free Beacon's estimate of 8 percent—which would have netted her over $2 million in sales.

And while DiAngelo has made her name demanding that white people stop avoiding difficult conversations, she did not respond to multiple requests for comment from the Free Beacon. 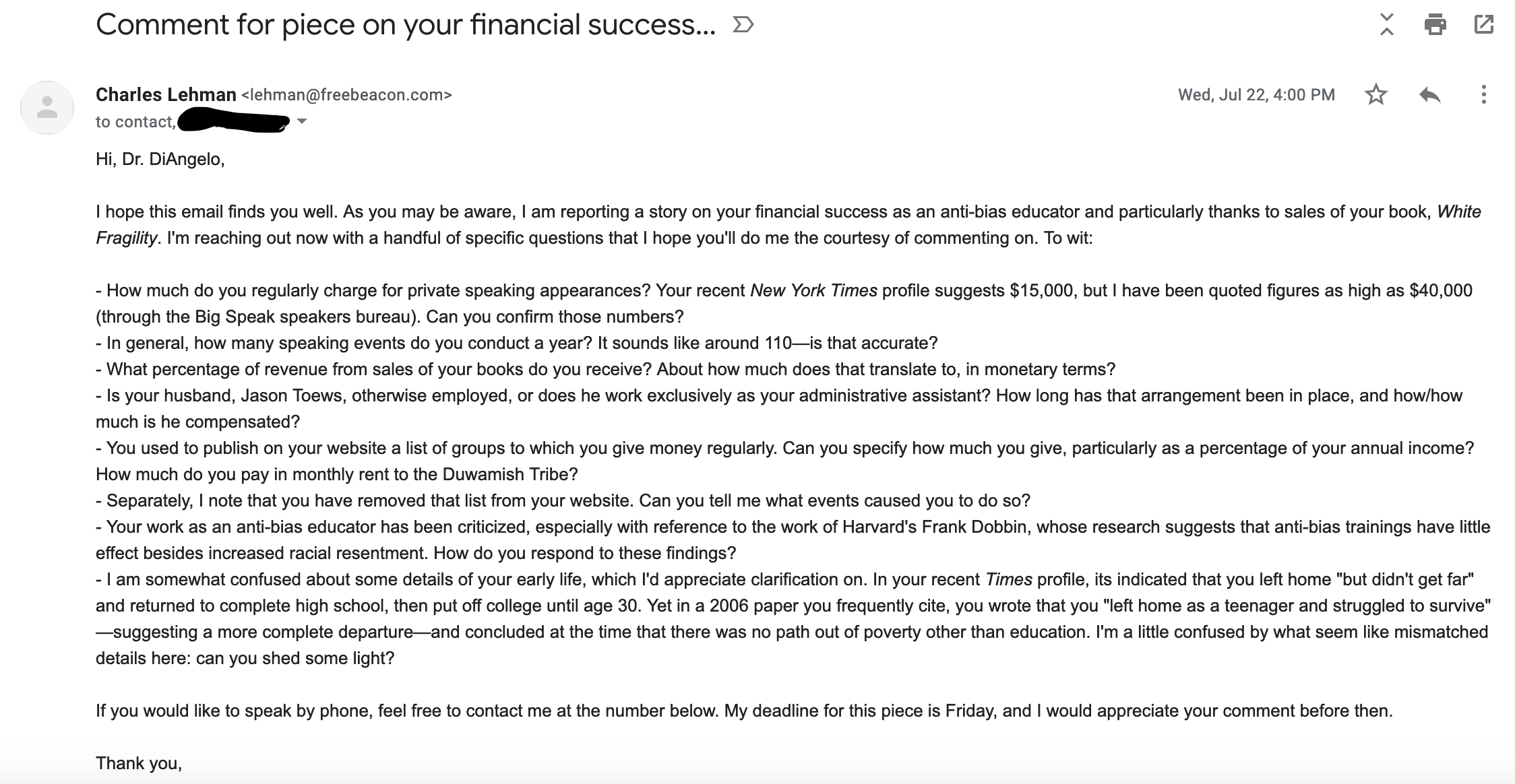 Although her star has slipped since this summer's upheaval—White Fragility no longer tops the New York Times bestsellers list, though it remains at number five on the paperback nonfiction list—the payment from UW-Madison shows that DiAngelo remains more than comfortable. She and other prominent "woke" figures, such as Boston University's Ibram X. Kendi, seem set to continue to reap healthy payouts for years to come.

Update 9:17 a.m.: This post has been updated with information from a UConn spokesperson.