Students who traveled from across the country to attend the annual gathering of a group that advocates the destruction of Israel were met by a group of peaceful protestors that branded the students as members of a pro-terrorist hate group.

Students for Justice in Palestine (SJP), a group funded and organized by a network that in the past was implicated in raising money for the terrorist group Hamas, held its annual conference last weekend at George Mason University in Fairfax, Virginia. SJP has emerged as the most prominent campus advocate of the anti-Israel Boycott, Divestment, and Sanctions (BDS) movement.

The conference served as a training seminar for students working to expand anti-Israel activism on their campuses. The aim of the protest, according to its student organizers, was to let SJP know that "anti-Semitism, attacking free speech, and promoting hate will not go unchallenged" at GMU.

The group of about thirty protesters carried signs illustrating SJP's anti-Semitism and its endorsement of terrorism into the student center where the conference was being held. The protesters were stopped at the entrance to a group of classrooms where the SJP seminars were being held by a contingent of SJP members. The SJP activists linked arm in arm with their backs turned toward the protesters behind several campus police officers, creating a blockade that stopped members of the protest group from entering the conference space. 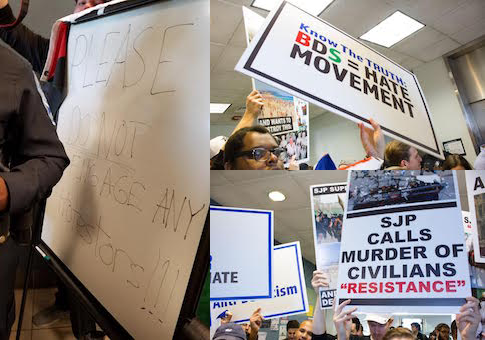 SJP organizers instructed their members not to acknowledge the protest, but that didn't stop some from speaking out. One SJP member was calling the protestors "Zionist terrorists" before he was scolded to return to his workshop room. Others remarked that "Zionists are so ugly." Another repeated numerous times that he "can't even." One waved his middle finger at the protesters before being escorted away by other anti-Israel activists.

SJP leaders were seen attempting to convince police on the scene that the protesters should be removed—but their demands were ignored.

Behind the SJP blockade, anti-Semitism was on full display. One SJP member posted a picture on Twitter, since deleted, of the Israeli flag being used as the "best doormat ever," with shoes and trash bags piled on it. Another threatened violence, vowing that she would "fuck up a Zionist."

Within the "workshops," students were taught about the history of the "resistance" movement and how to more effectively fight against Israel and pro-Israel students on their own campuses, according to a conference pamphlet obtained by the Washington Free Beacon.

In one session, "History of Palestinian Resistance," SJP taught students about the "tactical transitions in resistance…and the emergence of Hamas." Another session, "(50) Shades of Zionism," taught that Zionism is a "settler colonialist ideology."

One session was aimed at Canary Mission, an online human rights watchdog that catalogues members of the BDS movement. SJP called the website part of a history of "blacklists and intimidation" against "activists who pose a threat to US interests." Attendees of the panel, SJP said, would learn "the importance of collective struggle in facing and challenging Canary Mission."

Another session, "Queering the Resistance," focused on making sure that "queer and trans communities" on campus know that they should participate in the anti-Israel movement. The workshop, SJP said, would "discuss practices for working towards gender and sexual liberation through the process of decolonization (and vice versa)."

"We need to question the ethics and the values of queer groups that voice fervent or tacit support for the Zionist state," wrote the pamphlet. The program guide did not indicate whether the workshop would address the fact that homosexuality is illegal in the Hamas-controlled Gaza Strip, or that Hamas executes people for being gay. 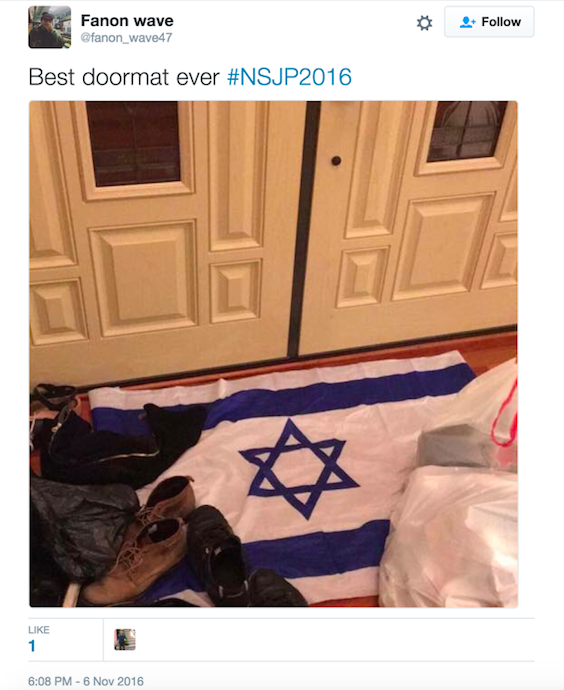 Jonathan Schanzer, a former terror finance analyst at the Treasury Department, participated in a panel discussion on SJP on the day of the protest at GMU. Schanzer has extensively researched SJP's funding and has testified to Congress that the primary organizational network behind the BDS group involves people who were formerly implicated in fundraising for Hamas.

Schanzer presented his research on SJP during a panel sponsored by Christians United for Israel at GMU. He was joined on the panel by Izzy Ezagui, a member of the Israeli army who lost his arm in combat against Hamas, who spoke on the difficulties of combating a terrorist group that deliberately targets civilians.

CUFI officials said student leaders at GMU were hassled by school administrators after the students reserved space in the same building that SJP had reserved for its annual conference.

"This is not the first time CUFI students have faced resistance from college administrators or faculty," said a spokesman for CUFI on Campus. "But rest assured, each time such a situation arises CUFI will do what is necessary to ensure our students have the right to speak."

Student members of CUFI at GMU reserved university space more than a week before the event was scheduled to take place and complied with numerous concerns that administrators expressed about the event.

The day before the event, CUFI was notified that all panelists would be required to sign a "No Pay Agreement"—a document intended for volunteer employees of GMU and that is not listed in any GMU guidelines as a requirement for guest speakers on campus.

Counsel for CUFI informed GMU that none of the guest speakers would be filling out the form and that the students planned to proceed with the event as scheduled, according to the letter, which was obtained by the Free Beacon.

GMU administrators allowed for the event to go forward as scheduled after being contacted by the lawyer.

"In this case, while it's unfortunate that members of the GMU administration sought to hassle our student about the CUFI on Campus event, we're pleased the University ultimately made the right decision," said the CUFI spokesman.

GMU did not respond to a request for comment on the incident.

While CUFI chose to speak out against SJP, other pro-Israel groups on campus took a different approach.

In response to the SJP conference, Hillel, the national Jewish student life organization, created an "Embrace Diversity" initiative, including a website and Instagram account, in an effort to avoid "division and derision among students and faculty." Part of the initiative was the creation of a miniature diversity "ball pit." The group also filmed interviews with students to explore their feelings about diversity.