A radical leftwing group is laying plans to shut down the Supreme Court in response to a leaked opinion that overturns Roe v. Wade, the Washington Free Beacon has learned.

#ShutdownDC is planning to block streets adjoining the Court to prevent the justices and their staff from reaching their chambers. Organizers acknowledged their operations go beyond constitutionally protected activity, and they referenced the likelihood of arrests and clashes with law enforcement during a Tuesday night briefing the Free Beacon monitored.

"One of our goals would be to expand the current political crisis by shutting down the Supreme Court," one of the organizers said. The group planned the blockade for Monday, June 13, a day when the Court will likely hand down opinions.

#ShutdownDC is concocting its ploy amid continued concerns over the Supreme Court's security and that of the justices following the unprecedented leak. The Department of Homeland Security's intelligence arm circulated a memo in May warning of a sharp rise in threats to the High Court. Law enforcement is investigating violent threats from pro-abortion extremists against members of the Court as well as the Court building itself, the memo said.

The Tuesday night briefing included more than 60 activists and was led by four or five organizers, some of whom concealed their identities. The presentation included a detailed "tactical" plan for blocking access to the Court's underground parking garage, which is the primary entry and exit point for employees and justices.

The plan calls for demonstrators to obstruct two points near the Court on 2nd Street, and a third spot on A St., which bisects 2nd Street directly behind the Court building. A Street is a residential area, while 2nd Street is a busy commuter thoroughfare.

To coincide with the blockade, #ShutDownDC is planning a rally in front of the Court on First St., which lies between the U.S. Capitol and the Court's marble plaza. Organizers described the rally as a "low-risk" location, in contrast to the blockade posts where they anticipate arrests and skirmishes with police.

"It's possible we will see many different law enforcement agencies, as we've become used to," an organizer said. Several agencies have jurisdiction over the area, including the Capitol Police and Washington's Metropolitan Police Department. None of the organizers made threats against particular justices, but they opened the briefing by warning that their tactics are illegal and readily acknowledging their goal is to massively disrupt the third branch of the government.

"In this space we may talk about some action ideas that stretch the bounds of constitutionally protected speech," a slide shown to attendees read.

"Avoid saying anything you wouldn't want to see on Fox News," it added. 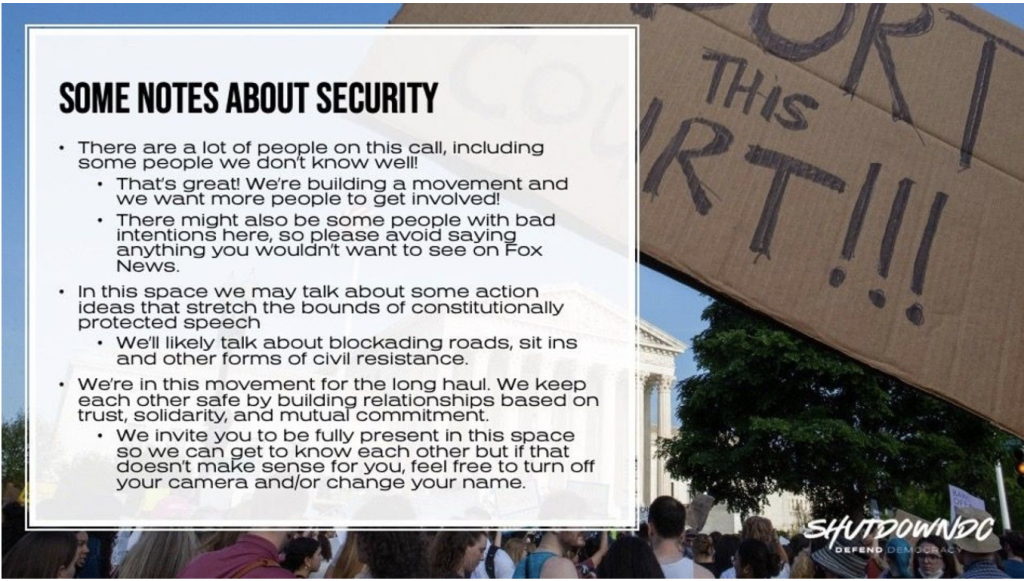 The briefing highlighted the group’s connections to other liberal judicial groups which mobilized following the leak of the draft opinion.

One organizer said that #ShutdownDC is behind demonstrations at the homes of justices thought to have joined the leaked opinion overturning Roe. A separate entity called Ruth Sent Us—named for the late justice Ruth Bader Ginsburg—has claimed responsibility for those events, a sign that the two groups are closely aligned.

"We were the first to hold an action at Brett Kavanaugh's house, and then recently we held an action at Samuel Alito's house," the organizer bragged. She added that she was heartened to see new individuals joining their efforts at Tuesday’s presentation.

"This is a crisis moment for democracy and for our rights, so we need as many new folks leveling up in their mobilization as possible," an organizer said.

Another organizer highlighted an upcoming June summit on the Supreme Court hosted by a leftwing dark money group called Demand Justice. The group, which is run by Free Beacon Man of the Year Brian Fallon, declined to say whether it is connected with #ShutdownDC or approves of its plans.

The Supreme Court's public information office declined to comment for this story.

#ShutdownDC is sharpening focus on House Democrats, who have yet to approve enhanced security measures for the Court. Sens. John Cornyn (R., Texas) and Chris Coons (D., Del.) spearheaded a security bill in the Senate that passed without opposition earlier this month. The House has yet to do anything.

"This should not be about politics but about ensuring the safety of the nine individuals on the Supreme Court," a senior House staffer who works on domestic security told the Free Beacon. "It's not a matter of safety for Speaker Pelosi; it's political theater with real ramifications."

Joseph Simonson contributed to this report.