President Joe Biden's COVID team appears to have entertained an electronic test-and-trace program pioneered by the University of Illinois that would have let businesses deny service to patrons based on their health data, a PowerPoint presentation obtained by the Washington Free Beacon shows. The program has eerie echoes of China's surveillance system, which uses data from citizens' phones to impose quarantines.

A PowerPoint produced by the school suggests scaling up the university's intrusive contact tracing system for use across the United States. Its file name, "2020-12-14 Shield Biden Covid Team," indicates that it was presented to the Biden team in December, amid an ongoing search for solutions to a seemingly insoluble problem: how to stop the virus without stopping the economy? The presentation proffered an answer.

The school's system uses a mobile app that records test results and Bluetooth data to determine who has been exposed to the virus—and "links building access" on campus to that information. Local businesses have also embraced it, making entry conditional on a "safe status" reading from the app. 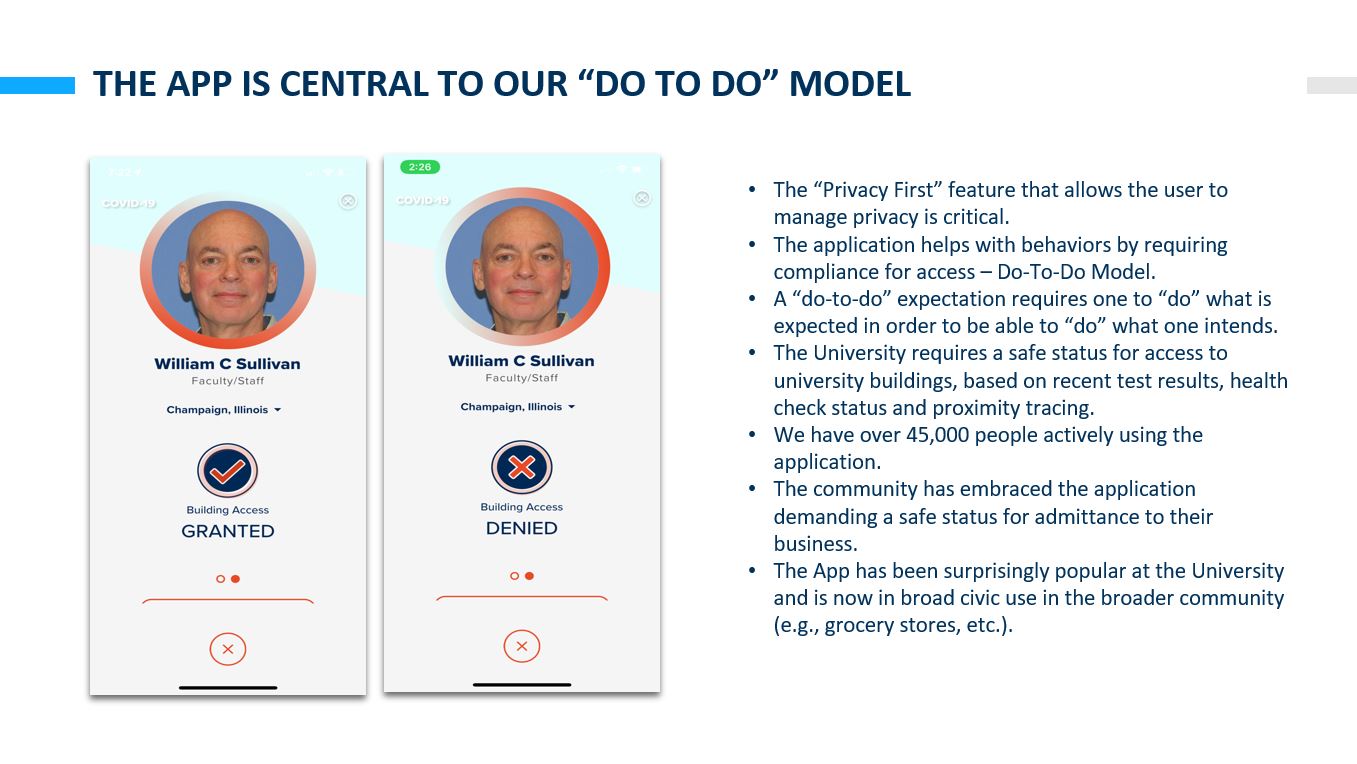 The proposal would amount to a more extreme version of the "vaccine passports" being rolled out by airlines and some U.S. cities, which are already causing controversy. Those passports, such as New York's "Excelsior" app, indicate whether an individual has tested negative or been vaccinated, but not whether they've been exposed to the virus based on tracking data. They collect less information and use a less granular classification scheme than the University of Illinois app, meaning they pose relatively fewer risks to civil liberties.

It's unclear how such a scheme would play with liberal activists. While it represents the sort of ambitious, nationwide COVID response Biden has said he wants, it also threatens to exclude far more Americans from public life than measures like voter ID laws, which progressives have decried as the "new Jim Crow."

Only 11 percent of Americans do not have a government-issued ID, according to the Brennan Center for Justice, whereas 19 percent don't own a smartphone. Widespread adoption of the app could ice nearly a fifth of the United States out of the economy, never mind the polling booth.

Stacey Abrams's Fair Fight, whose founder has called voter ID laws a way to "scare people out of voting," did not respond to a request for comment.

The app's selling point is its ability to quickly isolate cases. "We need a SWAT team approach for hotspots," the presentation reads. "The goal should be to isolate confirmed positives in hours, not days." It further encourages the universal adoption of the app's "safe status requirements," saying they are a "critical aspect of curbing the spread in any community."

Asked to clarify the context of the presentation, neither the university nor the White House responded to requests for comment.

Digital contact tracing has proven an effective substitute for lockdowns in many countries, allowing them to remain open without uncontrollable spread. Singapore, Taiwan, Hong Kong, and South Korea all mandated the use of mobile contact tracing apps and were largely spared the tradeoffs Western countries ended up making.

The University of Illinois saw similar success. As of December, its test positivity rate was just 0.43 percent, whereas the rate for the surrounding county was 7.9 percent, according to a graphic in the presentation. 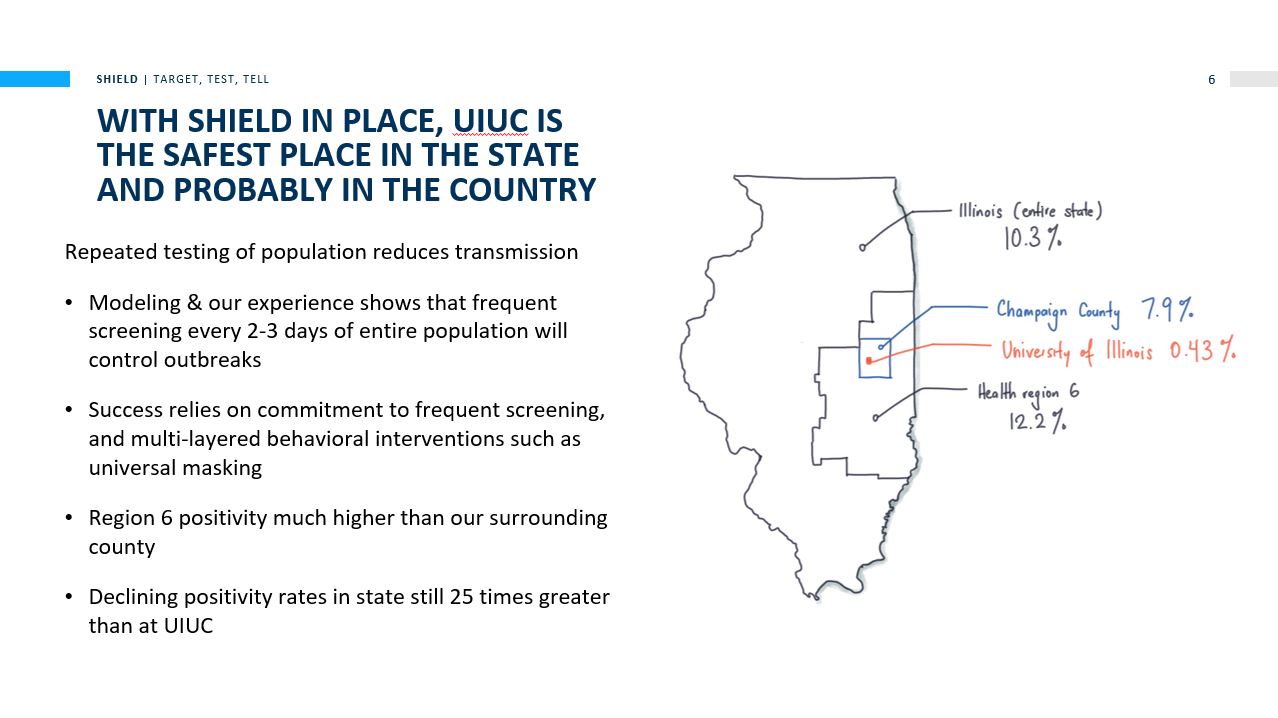 All this would have made digital contact tracing of interest to Biden, who said on the campaign trail that he would "shut down the virus, not the country."

"Opening up society as much as possible for economic, educational, entertainment, and religious activity depends on local successes in testing, contact tracing, [and] isolation," the presentation reads. "Overwhelming the health care infrastructure is extremely costly and shuts down the economy."

Even so, the proposal effectively substitutes one tradeoff for another: Digital test-and-trace could have enabled faster reopenings at lower risk, without centralizing surveillance in the hands of the federal government. But it would likely have encouraged a form of decentralized surveillance among businesses and local bureaucrats, which poses threats of its own.

Privacy and public health experts are ambivalent about the tradeoff.

"The concerns for privacy and liberty here are obvious," said Ari Schulman, the editor in chief of the New Atlantis, which has run several essays on the dangers of digital surveillance. "The best way to strike the right balance with a system like this is to offer model programs and infrastructure to local institutions, but leave it to them to adapt it in a way that their members will find legitimate."

The proposal gestures at this point. It assumes adoption of the app would be optional and says it can be tailored to the needs of local communities. The federal government should support these measures, the presentation states, but "efforts to mitigate the virus need to be led and managed locally."

In order to be effective, however, the app requires widespread participation—meaning local institutions would have a strong incentive to mandate it. If every business in a city made the app a requirement for entry, residents would have little option but to download the app. That might drive down cases and stave off lockdowns, an attractive prospect for the retailers hurt by them. But it could also be the beginning of a kind of social credit system, in which access to public life is determined by personal data.

Nicholas Christakis, an epidemiologist at Yale University, noted that many Asian countries had taken steps in this direction to fight the pandemic.

In South Korea, Christakis said, the government tracked "people's credit card usage to see which stores they had been in," a move that would have raised legal issues in the United States and Europe. "I was concerned by the extreme measures that China and Korea and Singapore employed in this regard," he said. "Requiring people to have negative tests to enter a building is concerning from a privacy point of view."

But, Christakis added, it may be necessary. "The measures in the slide deck do not strike me as that extreme" compared with other countries, Christakis said, "and we, as a society, must make at least some sacrifices if we are to work together to effectively counter a collective threat."

Because the University of Illinois app uses Bluetooth data to determine exposures, it is less invasive than some other systems that rely on GPS tracking. "When a user has a positive test result," the school's website explains, students who have come within Bluetooth range of that user are notified and marked as exposures. In other words, the app doesn't track users' locations, just their proximity to one another.

But the surveillance schematic is there, and it could become a flashpoint in future crises. With over a sixth of the population fully vaccinated, such schemes have been temporarily tabled by the Biden administration. Whether they stay that way is an open question.