Column: Blame the Ohio governor if Donald Trump is the Republican nominee

When John Kasich departs this earthly vale of tears, he ought to donate his brain to science. It could teach us a lot about irrational thinking.

The Ohio governor has won a single state: his own. He has 143 delegates. That puts him fourth in the count behind Donald Trump, Ted Cruz, and Marco Rubio—who is no longer a candidate.

To win the nomination on the first ballot of the Republican convention, Kasich would have to win 138 percent of the remaining delegates. This is impossible. Even a politician should be able to do that math.

To win on the second ballot, Kasich would have to outmaneuver Ted Cruz and his impressive delegate operation. That seems, let us say, beyond implausible.

To win on a subsequent ballot, when the nomination is up for grabs, Kasich would have to do something over the next two months that he seems constitutionally incapable of doing: show the slightest bit of selflessness and concern for the cause and the country and put those feelings ahead of his own narcissism, vanity, condescension, and sneering disdain for the party he seeks to lead.

What does that mean for Kasich in practice? Running against Trump where he's strongest and ceding ground to Cruz where he's weakest.

Kasich helps Trump. He can’t pretend otherwise. For months the anti-Trump forces have wanted nothing more than the ability to coalesce around a single challenger. One goofy man has stood in the way all along. He bit into Bush’s vote, into Christie’s, into Rubio’s. Now he’s biting into Cruz’s.

Here's John Kasich's fundamental misunderstanding of this primary race: The Trump vote is static. His supporters aren't going anywhere. But the anti-Trump vote is elastic. It can bend in any direction. It shifts between Kasich and Cruz depending on the terrain. In proportional states, the distribution of the non-Trump vote doesn’t matter. But in states where there's a prize for coming in first, either statewide or by congressional district, then the distribution of the non-Trump vote is all that matters. When asked to choose between Cruz and Trump, Kasich voters go with Cruz overwhelmingly. Yet Kasich is so stubbornly and stupidly and selfishly focused on maximizing his share of the anti-Trump vote that the Trump vote remains the same.

The strategy is mindless. I'll say it again: It doesn't matter how many delegates Kasich accrues. The only thing that matters, the only prospect he or anyone else has of securing the nomination, is keeping Trump from winning on the first ballot. If Trump loses, and Cruz proves unable to secure the second ballot, the opportunities are endless—for Kasich, for Scott Walker, for General Mattis, for anyone who can unify the party. But for Kasich to be in such a position, he'd have to show he cares more about stopping Donald Trump than he does about picking up a few more delegates.

Right now Kasich is the guy for Republicans who can’t bring themselves to support either Trump or Cruz. Voting for Kasich relieves them of the burden of having to choose between two men they find distasteful.

It’s an evasion. Doesn’t get these voters anywhere. Indeed, the longer Kasich stays in the race, the greater likelihood of a Trump nomination on the first ballot at the convention. Kasich and his voters are complicit in the same offense: easing Trump's path to taking over the Republican Party and endangering the country because they'd rather not make a tough and painful decision.

Yet Kasich remains. Perhaps he wants to be Trump’s running mate. He denies it. But they all deny it. No one wants to be vice president—until the moment the presidential nominee offers you the job. What a sad and ironic end to Kasich’s career if he, like so many Republicans and conservatives who have appeased Donald Trump, betrayed his principles and inevitably his conscience in the pursuit of power.

"When I get to the pearly gates," Kasich has said, "I'm going to have an answer for what I've done for the poor." Sorry John, but St. Peter will be asking more than just one question. He'll want to know what you did to stop Donald Trump. And right now my friend you don't have an answer at all. 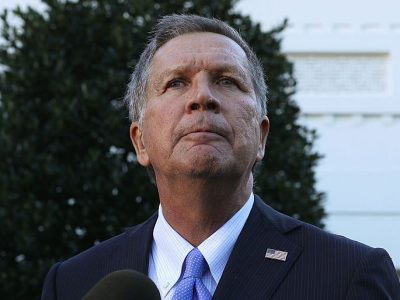