Column: The president's commentary defies analysis. As far as it goes.

I don't think I've ever read a presidential interview quite like the one Donald Trump gave to the New York Times yesterday. Going over the transcript, there were times when I thought I was reading a David Mamet play. (You can read the full thing here.)

Because speculating about the Russia investigation is this city's favorite hobby, the rest of the media are following the Times‘ lead of focusing on Trump's remarks about Attorney General Jeff Sessions, Deputy Attorney General Rod Rosenstein, acting FBI director Andrew McCabe, and special counsel Robert Mueller. How can Jeff Sessions remain in his job, cable news anchors ask, when Trump says he wouldn't have appointed the former Alabama senator had he known Sessions would recuse himself from all matters relating to Russia's interference in the 2016 presidential election?

Trust me: Sessions will find a way to swallow his pride.

Obsessing over Russia misses the larger meaning of this interview. I was amazed at the breezy way Trump reveals his thoughts on, well, just about everything. Have we ever known exactly what a president is thinking in real time, about the people he meets, the situations in which he finds himself, the decisions he makes? Has there been as wild and brash and colorful and outrageous a character in the Oval Office since Teddy Roosevelt? And how is it possible to contain, to embarrass, to trap a man as shameless as he? Every time the reporters think Trump is cornered, he demolishes a wall.

"American politics has given the satirist pretty much nowhere to go. But away," Christopher Buckley said recently. Not just the satirist. The columnist, too. And so I will just back off slowly, and let the president take the stage. 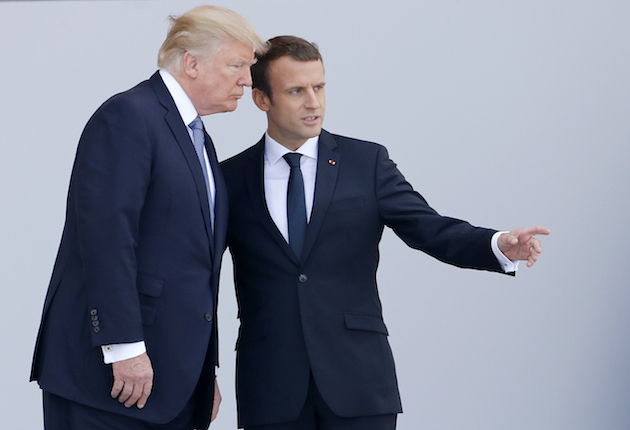 HABERMAN: He was very deferential to you. Very.

TRUMP: People don't realize he loves holding my hand. And that's good, as far as that goes.

TRUMP: I mean, really. He's a very good person. And a tough guy, but look, he has to be. I think he is going to be a terrific president of France. But he does love holding my hand. 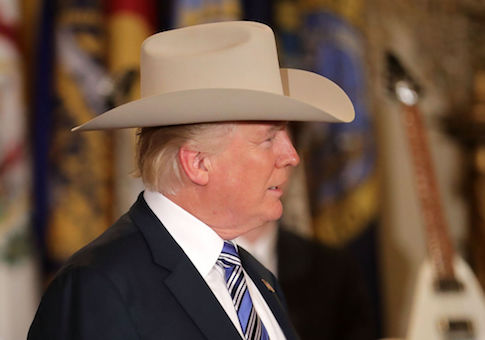 U.S. President Donald Trump wears a Stetson cowboy hat while touring a Made in America product showcase in the East Room of the White House / Getty Images

TRUMP: It's been a long time. Nothing changes. Wait till you see what we're going to do on trade.

HABERMAN: Sounds like it's going to be very interesting.

TRUMP: Much more interesting than anybody would understand. 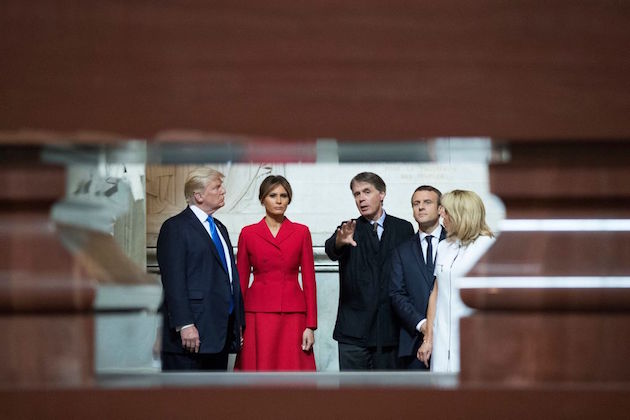 TRUMP: Well, Napoleon finished a little bit bad. But I asked that. So I asked the president, so what about Napoleon? He said: ‘No, no, no. What he did was incredible. He designed Paris.' [garbled] The street grid, the way they work, you know, the spokes. He did so many thing even beyond. And his one problem is he didn't go to Russia that night because he had extracurricular activities, and they froze to death. How many times has Russia been saved by the weather? [garbled]

Trump on Hitler and the American economy: 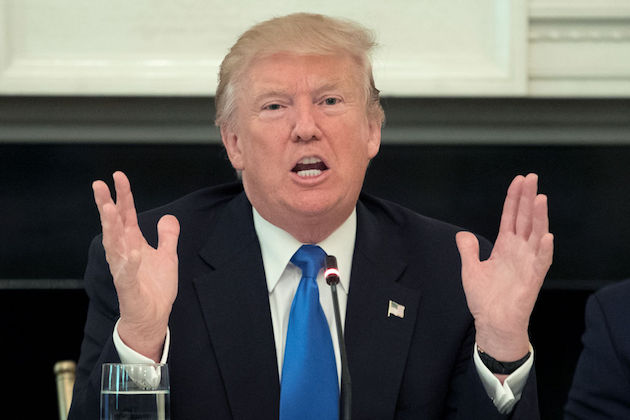 TRUMP: But the Russians have great fighters in the cold. They use the cold to their advantage. I mean, they've won five wars where the armies that went against them froze to death. [crosstalk] It's pretty amazing.

So, we're having a good time. The economy is going great.

Trump on the wife of Japanese prime minister Shinzo Abe: 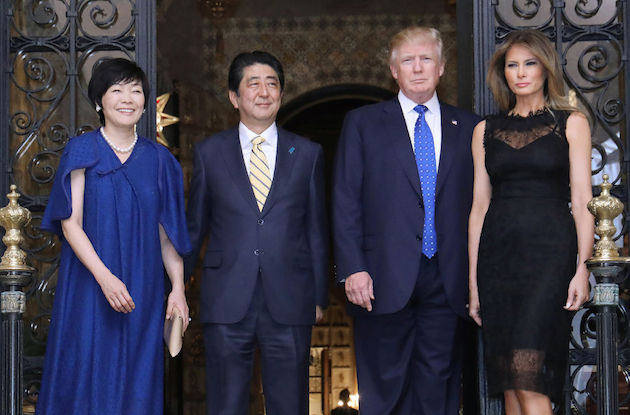 TRUMP: So, I was seated next to the wife of Prime Minister Abe [Shinzo Abe of Japan], who I think is a terrific guy, and she's a terrific woman, but doesn't speak English.

HABERMAN: That must make for an awkward seating.

TRUMP: Well, it's hard, because you know, you're sitting there for—

TRUMP: So the dinner was probably an hour and 45 minutes. 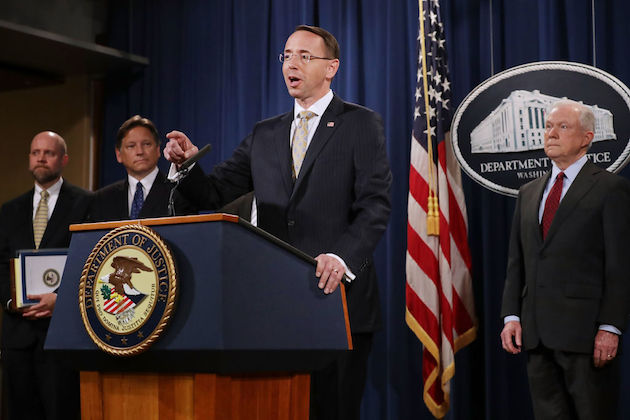 TRUMP: So he [Attorney General Jeff Sessions] recuses himself. I then end up with a second man, who's a deputy.

TRUMP: Who is he? And Jeff hardly knew. He's from Baltimore. 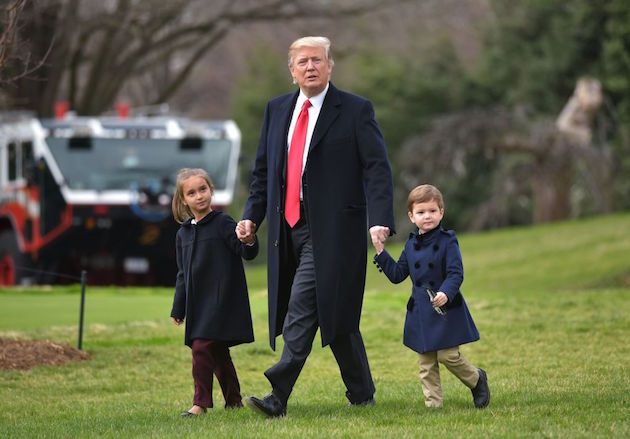 U.S. President Donald Trump makes his way to board Marine One with grandchildren Arabella Kushner and Joseph Kushner / Getty Images

TRUMP: My granddaughter Arabella, who speaks—say hello to them in Chinese.

TRUMP: This is Ivanka. You know Ivanka.

IVANKA TRUMP: [from doorway] Hi, how are you? See you later, just wanted to come say hi.

TRUMP: She spoke with President Xi [Jinping of China]. Honey? Can you say a few words in Chinese? Say, like, "I love you, Grandpa."

Trump on why he wouldn't have needed to collude with the Russians: 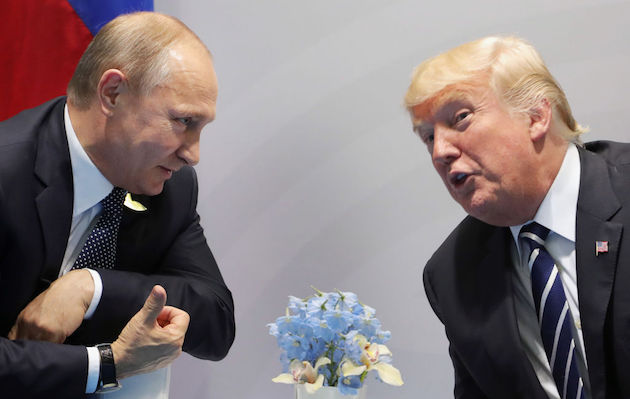 TRUMP: Peter, that’s all I did, was make those speeches about her. … I don’t think I added anything much different than I had been doing. … I’ve made some very strong speeches about the corrupt emails. The 33,000 emails being deleted and bleached, and all of the things she was doing. I would make those speeches routinely. … There wasn’t much I could say about Hillary Clinton that was worse than what I was already saying.