"Engaging in good faith discussion"—that is how Harvard Law School titled a profile of Jacob Richards, the outgoing president of its Federalist Society chapter. The piece, published April 27 by the law school’s communications office, was effectively a targeted advertisement for center-right applicants, featuring gushing quotes from Richards about the open-mindedness of his class.

"I came into law school wondering if I’d get shunned for voicing conservative views," Richards said. "Instead, I’ve found that most of my peers are eager and willing to engage."

Then came the leak.

The law school featured the profile on its Instagram account on May 11, one week after news broke that the Supreme Court has circulated a draft opinion that would overturn Roe v. Wade. That timing didn’t sit well with Gabrielle Crofford, the outgoing president of Harvard Law School’s student body, who urged anybody upset that the law school had kind words for a conservative to complain to the communications office.

"If it made you mad to see the President of Fed Soc celebrated on Harvard Law’s IG mere days after we found out Roe was being overturned, you should email Communications Dean Melody Jackson," Crawford wrote on Instagram. "The more students they hear from the better." 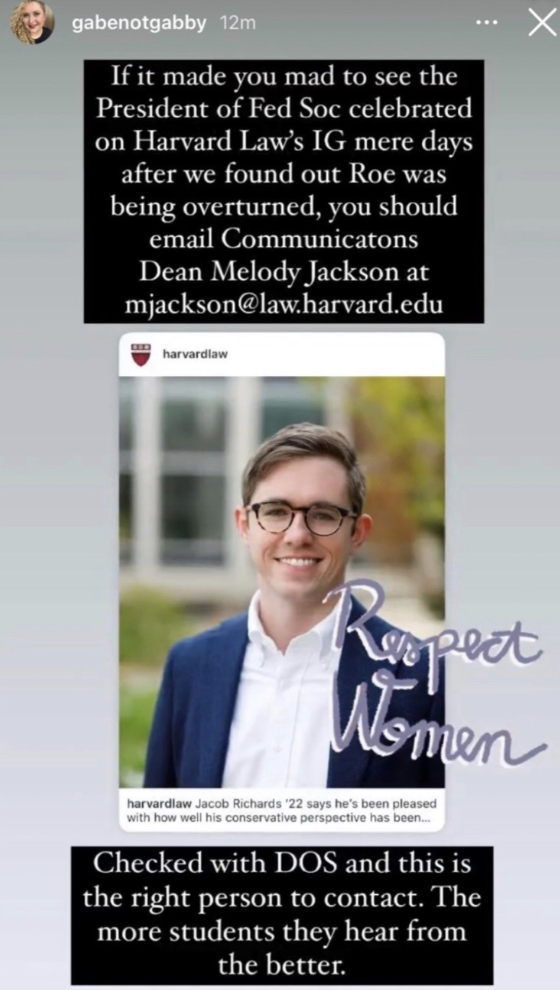 The school received multiple emails—"probably in the dozens," a student with firsthand knowledge of the situation told the Washington Free Beacon—enough for Harvard to disable comments on the Instagram post amid a tsunami of vitriol. Current and former students demanded the law school delete the post, calling it "embarrassing," "tone-deaf," and "transphobic."

Initially, the blow-up seemed to follow a familiar script: milquetoast remarks from a center-right lawyer, followed by furious demands for administrators to enforce orthodoxy. Many law schools have capitulated to those demands: from Yale Law School, which threatened to discipline a conservative student for using the term "trap house," to Georgetown Law School, which placed a professor on leave for criticizing affirmative action on the Supreme Court.

At Harvard, though, administrators refused to remove the post and told Richards they had his back.

"I am very sorry that you have received such critical comments," Jackson, the law school communications dean, wrote Richards in an email. "We were pleased to share your story."

That resolve, students say, reflects Harvard Law’s size and staffing decisions, which have inoculated it against the ideological mania of rival law schools—especially Yale.

Harvard enrolls three times as many law students as Yale or Stanford, allowing the school to create a much larger network of conservative student groups and flagship publications. It also employs four conservative law professors—Jack Goldsmith, Adrian Vermeule, Charles Fried, and Stephen Sachs—and even some conservative administrators: John Manning, the dean of the law school, clerked for Antonin Scalia.

The result is an institutionalized check on activist students that has few counterparts in legal academia. Those activists are not necessarily more tolerant than the ones at other schools: In 2021, several Harvard Law student groups demanded that the dean denounce Vermeule, an outspoken social conservative, over his "harmful" tweets.

But Manning didn’t cave. By contrast, the deans of Cornell Law and the University of Pennsylvania Law have both condemned professors who upset activists at their respective institutions.

As law schools across the country grow more ideologically stifling, Harvard’s backbone has given conservative students some peace of mind.

"I could not imagine traphouse-gate happening here," one student said.

The contrast illustrates how a school’s seemingly apolitical properties can have profound effects on its political culture. Harvard is the largest law school in the country, with approximately 2,000 students, 10 percent of whom are members of the Federalist Society. That percentage is not unusual, but the absolute numbers are: Harvard’s Federalist Society chapter boasts 200 students—the size of Yale Law School’s graduating class.

​"It may be easier for right-of-center students to form a community when there are more than just a handful of them," said Sachs, the Antonin Scalia Professor of Law at Harvard. "When there’s a community on campus, it can help broaden everyone’s view of the intellectual landscape."

The school’s conservative network has become an informal part of its branding. "It’s not an accident that they profiled the Federalist Society president," one student said. "Harvard cultivates a big tent image for conservatives."

Recent scandals at Yale Law School, the student added, have only bolstered that image.

This right-of-center branding is partly a function of the faculty. Stanford Law has one marquee conservative professor, the originalist scholar Michael McConnell; Yale Law doesn’t have any. At Harvard, however, the larger number of conservative professors means that liberals often take classes with them, which encourages exposure to different points of view.

"I was worried that students would see ‘Antonin Scalia Professor’ in my title and run for the hills," Sachs said. But when he taught a reading group on abortion ethics, "the students who signed up were just about evenly divided between pro-choice and pro-life positions."

Even Vermeule, who was the subject of student protests, has a solid reputation among most progressives. His administrative class is typically oversubscribed, students said, because the school’s most ambitious leftists all jockey for slots in it.

Harvard is also home to the Journal of Law and Public Policy, the official journal of the national Federalist Society. The journal has made Harvard the de facto publishing house for the conservative legal movement. The past issue alone included both Supreme Court justice Samuel Alito and Sen. Mike Lee (R., Utah), along with John Yoo, Eugene Volokh, and other luminaries of legal conservatism.

The journal is so central to Harvard’s identity that its editor in chief, Eli Nachmany, received an award for "community leadership" at graduation this May. Nachmany, who spent two years in the Trump administration prior to law school, noted that first-year law students can join the journal as soon as they matriculate, making it much more accessible than most law reviews.

The journal always has enough editors, he added, "because of the massive size of the Harvard Law student body."

That size also steepens the grading curve relative to peer law schools, forcing students to spend more time on class—and less time on activism—if they want to stand out academically.

"The ambition and drive that would get channeled into campus politics at Yale gets channeled into studying and law review here," Richards told the Free Beacon.

When Harvard Law does have protests, they tend to be small, undisruptive, and almost comically academic. The day after the Supreme Court leak, students organized a "study-in" outside the law school’s Office of Career Services, which they accused of "enabling" conservative law clerks. 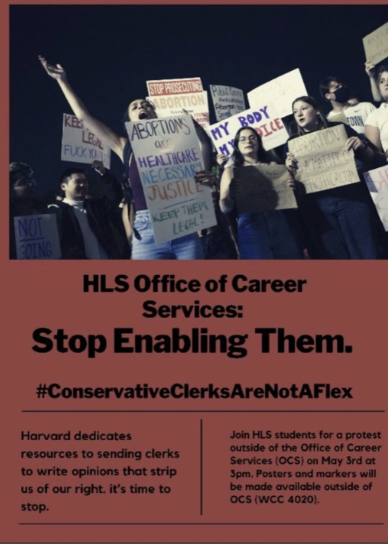 Only a dozen students showed up, sources at the school said. It was a far cry from the uprising that rocked Yale this March, when hundreds of law students attempted to shout down a bipartisan panel on civil liberties. But for the signs, the Harvard protest could have been mistaken for an outdoor study session.