Boston University is requiring all students and faculty to affirm that they should "intervene" if a woman is complimented on her husband or encouraged to have children, guidance transmitted during a mandatory Title IX training this semester.

The training included multiple-choice questions that had to be answered correctly in order to complete it. Some questions were empirical—"How often do you think people make false allegations?"—while others asked about the appropriate course of conduct in a given scenario. Faculty who did not complete the training would "not be eligible for merit-based salary increases," the school said in a campus-wide email, with further penalties possible for "continued non-compliance." Students who did not complete it would "be blocked from registering next semester," according to the university's website.

Several scenarios involved "bystander intervention," the idea that onlookers should prevent harassment by inserting themselves into potentially inappropriate encounters. In one vignette, an Asian woman is told that her white husband is "good-looking" and that "half-Asian babies are the cutest." Asked "what should you do," students and faculty were forced to select "Intervene" to advance through the training. Even though the woman "smiled" at the compliment, the training explains, she still "might have felt uncomfortable" about comments relating to "her race, her husband's appearance, or the prospect of having children" itself. 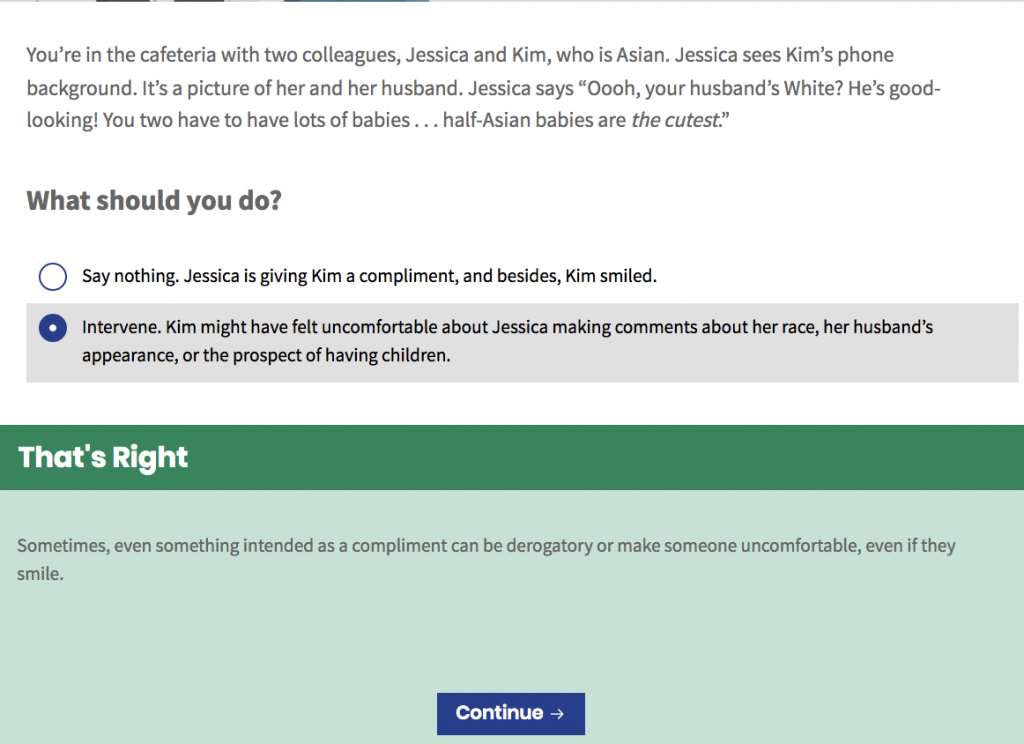 The training also required students and faculty to affirm that people "rarely" make false accusations. "You might be surprised to learn that false reports aren't common, and frivolous claims are almost nonexistent," the training says. "Sometimes" was not an acceptable answer—though one study found that as many as two-thirds of hate crime accusations turn out to be false. 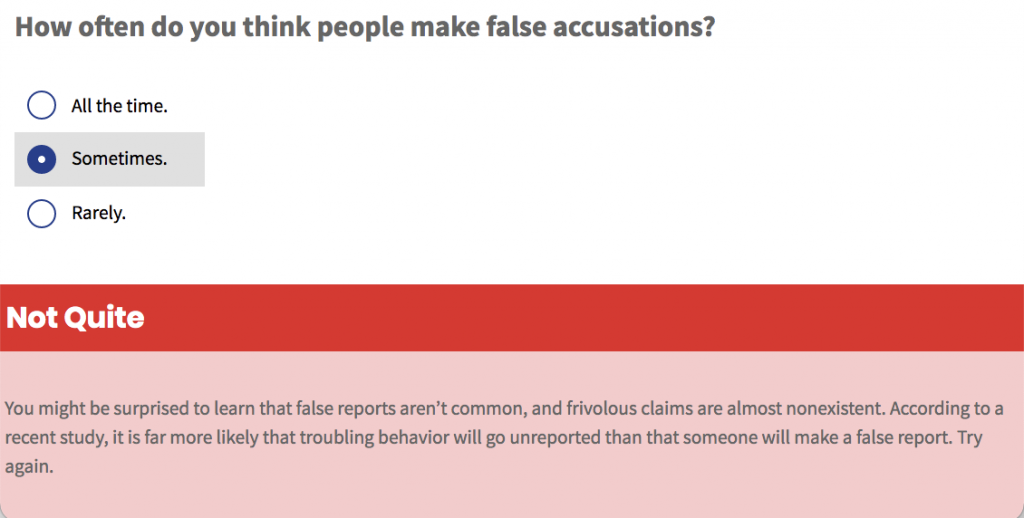 The training drew sharp criticism from the Foundation for Individual Rights in Education (FIRE), which told the Washington Free Beacon that Boston University was violating its own free speech policies.

"BU makes clear commitments to free expression and academic freedom, and that includes the right to be free from compelled speech," FIRE's Aaron Terr said. But to complete the training, students and faculty "must select the university’s preferred answers as their own," Terr explained.

"This is compelled speech and has no place at a university that promises its faculty expressive freedom," Terr said.

Boston University did not respond to a request for comment.

The training, which was created by the education consultancy EVERFI and appears on the school's "compliance services" website, demonstrates how the antidiscrimination law can become a Trojan Horse for compelled speech. Universities frame such compulsion as a way of complying with Title IX and other civil rights statutes, even when it goes far beyond what the law requires. Simply quizzing students and faculty on their legal obligations does not violate academic freedom, Terr said. But the Boston University training, which requires "them to express agreement with particular viewpoints," does.

Boston University has seen several such violations since the summer of 2020. Between July and November of last year, the university's theater and playwriting programs both adopted a policy of requiring "land acknowledgment[s]" before performances, with the theater program also requiring all instructors to "include a [Diversity, Equity, and Inclusion] statement in their syllabus." In October, FIRE sent the university a letter of concern about both policies but has yet to receive a response.

Statutes like Title IX can give administrators cover for this sort of overreach. After Yale Law School's "discrimination and harassment coordinators" pressured second-year law student Trent Colbert to write a pre-drafted apology for a "triggering" email, the dean of the law school, Heather Gerken, claimed the administrators were merely "attempting to carry out their obligations under university policy whenever discrimination complaints are filed." She also invoked Title VI of the Civil Rights Act, which "oblige[s] the law school to ensure a learning environment free of discrimination."

In the name of complying with these laws, universities have attempted to regulate a quotidian and constantly expanding list of behaviors.

The BU training goes so far as to imply that telling someone to put their phone away could constitute illegal discrimination or harassment. One question asks about the "best path forward" when a classmate "keeps checking their phone" while working on a group project. The "right" answer involves giving the classmate "the benefit of the doubt"; the wrong one involves telling them to "stop checking your phone—that's rude." 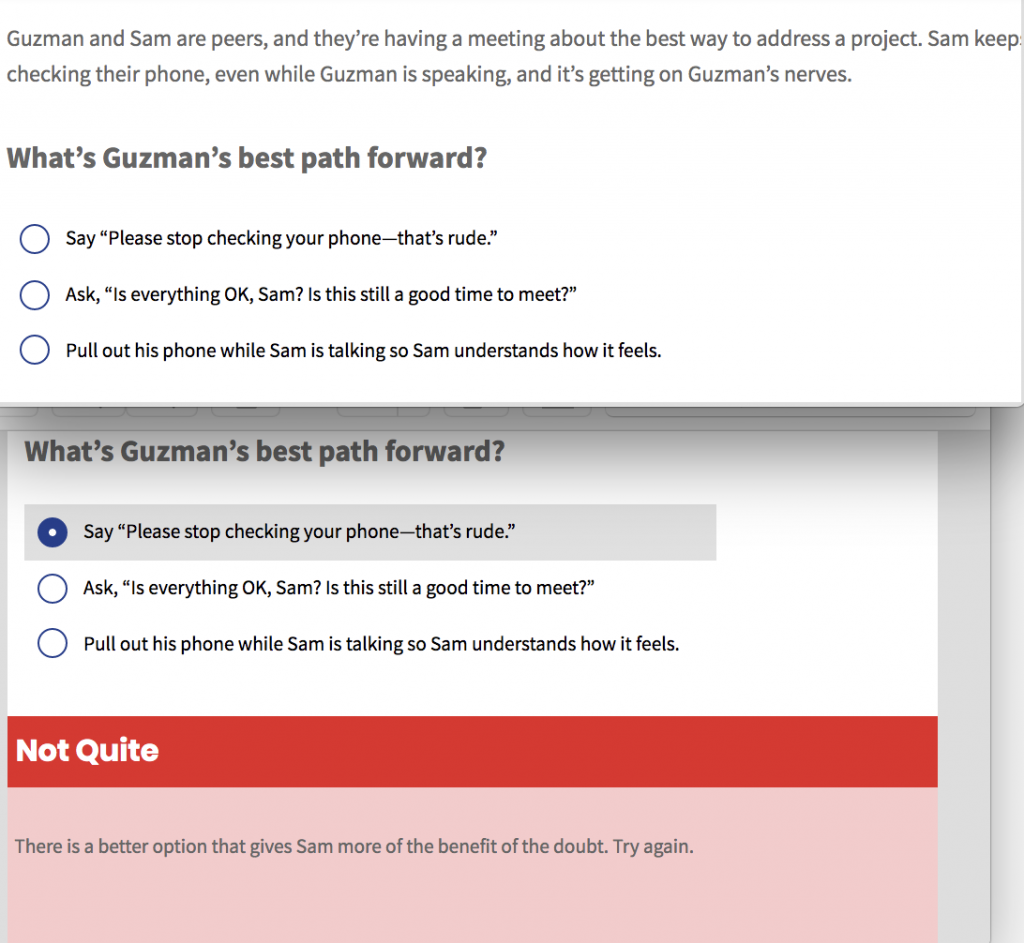 Other questions encourage people to police flirtatious encounters and potentially offensive jokes. "You sit near Heidi, and for the past week you've seen David come over to talk to her several times," one scenario begins. "You’re not sure, but you thought you saw David rubbing her back at one point today. What should you do?" Students and faculty who said "Nothing" were told to "try again."

"You don't have to be certain that potentially concerning behavior crosses the line before taking action," the training states. 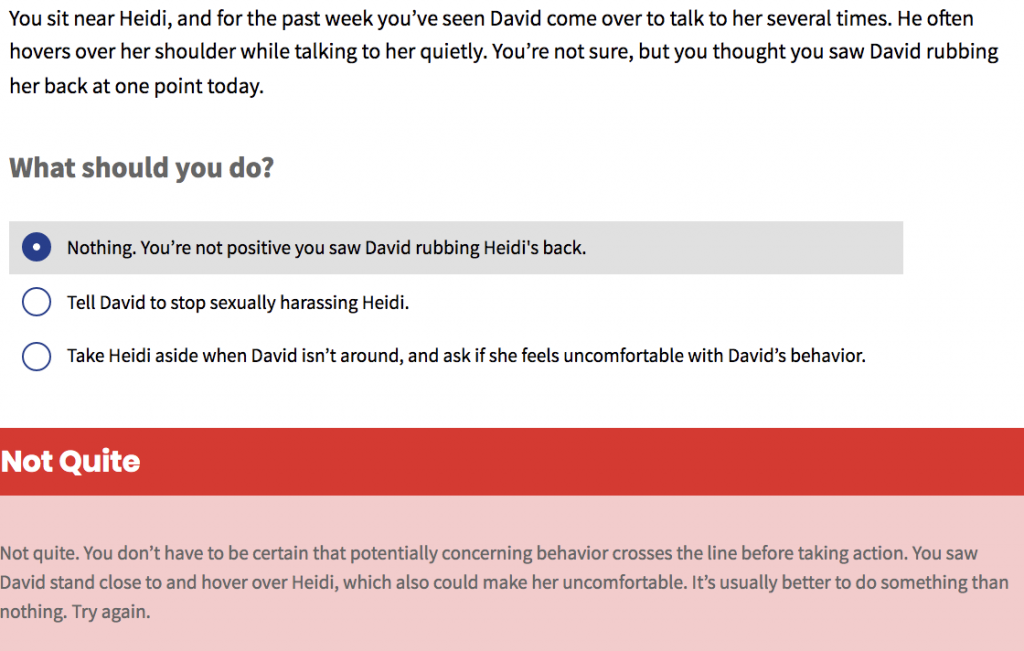 Nor must you be certain that anyone finds a joke offensive before speaking up about it. "What should you do" if "Greg begins speaking loudly in a stereotypical Chinese accent," the training asks. "Say something. Mocking an accent is offensive"—even if nobody registers offense. 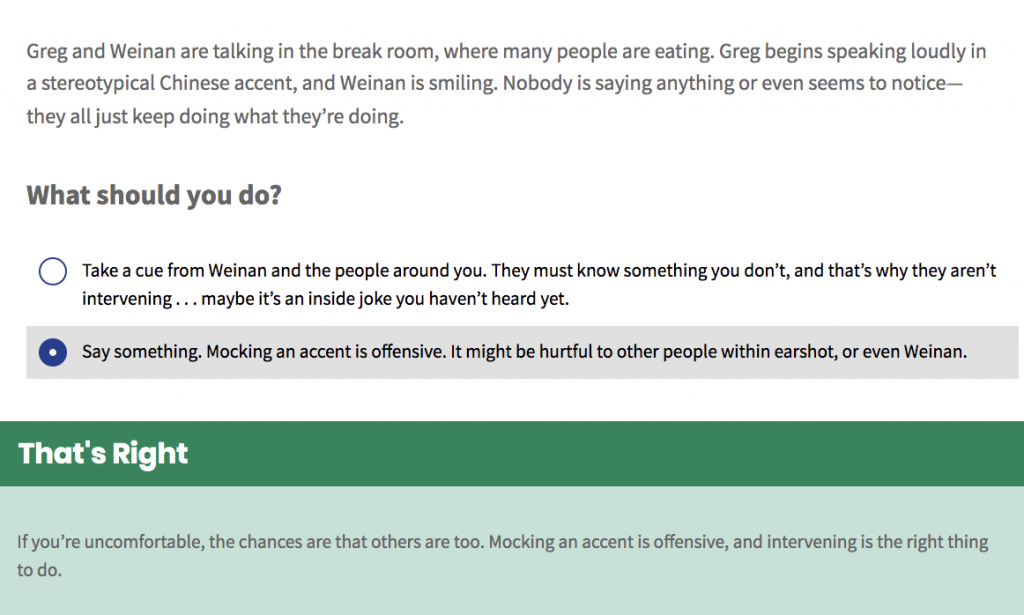 The training justifies such interventions by positing that "microaggressions" are more damaging to "employee well-being" than "overt harassment." Even "[w]ell-meaning people can still cause harm," one module says. "It's important to separate someone's intention from the impact of their actions."