11K words from Obama on his worldview and all DC can talk about is an obviously accidental micro-gaffe. This is why everyone hates DC press.

Fisher is upset that people are focusing on something he and the Obama administration doesn't want them to focus on, namely the administration's apparent belief that attacks by Islamic extremists targeting Jews are "random" acts of violence. Here's Obama, in his own words, speaking to Matt Yglesias: "It is entirely legitimate for the American people to be deeply concerned when you've got a bunch of violent, vicious zealots who behead people or randomly shoot a bunch of folks in a deli in Paris."

As if, you know, the shooters just kind of stumbled onto that kosher deli and would've been happy shooting up a Moroccan joint instead if they had happened upon it first.

I find Fisher's missive remarkably amusing for a couple of reasons. The first is his idea that this "obviously accidental micro-gaffe" isn't itself a fascinating glimpse into Obama's worldview. I mean, the big brains at Vox didn't think it was a particularly big deal, since neither Ezra Klein nor Matt Yglesias appear to have asked him a follow up. But it really is: If you think that radical extremists targeting an ethnic group is nothing more than a random act of violence, you reject the whole framework of terrorism and are, frankly, not in a good position to lead an effort aimed at stopping terrorists.

Most humorously, however, is Fisher's rather rabid insistence that there's nothing to see here, this is an accident, a misstatement, it's a gaffe, you're all crazy. Because you know who seems to disagree with Fisher about this? Um, the Obama administration. Josh Earnest was given a chance to walk Obama's idiotic statement back today, an opportunity to say the president meant "senseless" rather than "random." Something, anything. And how did Earnest play it? 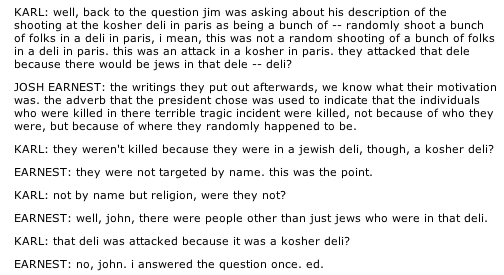 Then, later in the day, Jen Psaki was given another opportunity to walk this back. How did she respond?

The State Department doubled down! Random act of violence. Jews: not targeted.