The Hobby Lobby Ruling Is the Left’s Benghazi

No one died, but liberals are OUTRAGED

And it couldn’t have come at a better time—that is, less than 24 hours before the FEC’s quarterly filing deadline. Democrats proceeded to fundraise the hell out of it.

Hey! But that’s different than fundraising off a tragedy like Benghazi! Maybe, but after reading some of these fundraising emails, it is pretty clear that Democrats want you to believe that the court’s ruling is, quite literally, a national tragedy of Benghazian proportions.

"It’s a shameful day for our country," wrote the Democratic Senatorial Campaign Committee. "But we CAN’T let the GOP use this to steal the momentum, erase our lead, and take over the Senate. The consequences would be dire."

Representative Scott Peters (D., Calif.) asked supporters to donate $5 in response to the "disgraceful" decision—that’s $1 for every "male justice [who] just gave your boss the right to discriminate against women."

Senator Richard Blumenthal (D., Conn.) was also outraged. "This morning, the Supreme Court dealt a crushing blow to all Americans," he wrote in a fundraising email. "This huge step backward means that some corporate bosses can deny women access to contraception based solely on their own beliefs."

There’s no use explaining how ridiculous it is to claim the Supreme Court has given employers the right to "deny women access to contraception," although Megan McArdle does so in sensible fashion. Some liberals know this to be untrue but say it anyway. Others, probably the vast majority, actually believe it to be true, because conservative justices would do something like that, and there's no time to read about the specifics of the case because The Colbert Report is on in 10 minutes.

Women's access to birth control should not be denied because of their employer's religious beliefs.

Either way, it sounds really scary, and is very effective at scaring people, including some exceedingly dim individuals such as this American treasure:

The Benghazi attack, on the other hand, was an actual national tragedy: people actually died, and the people responsible are significantly more terrifying than Samuel Alito. Liberals love to mock the conservative outrage over Benghazi, and think much of it can be summed up like this: 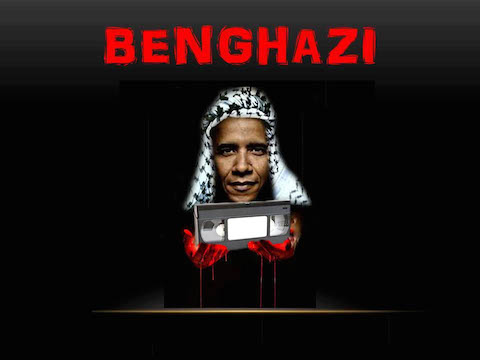 And yet, here is how the liberal base—you know, the intellectually superior political movement—responded to the Hobby Lobby decision: By spewing Internet outrage at a Twitter account (@SCOTUSblog) that they wrongly assumed to be affiliated with the Supreme Court (and getting trolled right back):

@SCOTUSblog Every one of you that voted to reduce women's rights should be utterly ashamed of yourselves. Back to the dark ages already?

@SCOTUSblog you should be ashamed of yourselves! Disgusting ruling.

We put them in closets, dear RT @sufferfest: @SCOTUSblog = Hitler. Keep your black robes out of my vagina!

A two-fer wrapped up with a bow in one single package. MT @CharlaneBrady: @SCOTUSblog You are an embarrassment and threat to human rights.

How did you come up with your twitter handle? RT @boortzthebozo @SCOTUSblog You'll be the death of this republic.

TL/DR MT @JoshMPlant Shame on you @SCOTUSblog! The highest court in the land, and you rule with your Christian C@cks. F@ck you.

Smart takes all around.

Conservatives have written songs about Benghazi:

Meanwhile, Democrats have been pretty explicit about their intentions to exploit the Hobby Lobby ruling for all it's worth. Not only are they raising money, they're also holding meaningless votes in the Senate, which they can then use to raise even more money, and hopefully turn out a liberal base that cares so deeply about the future of the country that they typically can't be bothered to show up in midterm elections.

When it comes to the press, the Washington Post gives us a sense of how this will be covered:

Okay, but how many times did it mention Benghazi?