Reporting Casts Doubt on One of Michelle Nunn’s Favorite Stories

Nunn has long claimed that Manuel’s is the where she and her friends "started" Hands on Atlanta, the volunteer organization where she served as executive director. She often tells the story of how the group was inspired while "sitting around a table at Manuel’s" and "literally passed around empty beer mugs and asked people to pitch in what they could."

It’s a nice story, and Nunn has used it in fundraising pitches: 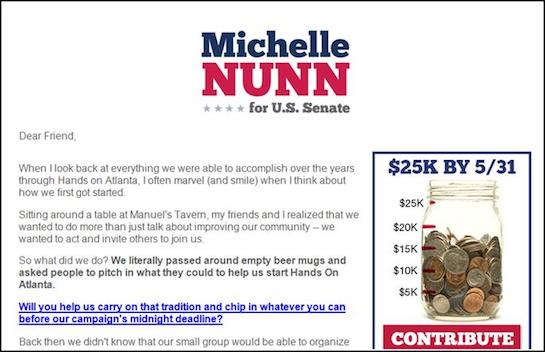 But is it true?

Reporting on the organization casts some doubt on Nunn's version of events. The Atlanta Journal-Constitution has previously reported that Hands on Atlanta "was founded in 1989 by 12 young professionals" who "met in each other’s homes and mailed postcards." Elise Eplan is credited with the idea to start the organization.

The AJC has also reported that Nunn wasn’t hired as executive director until almost a year after the group’s founding, when "a friend told Eplan about a recent graduate named Michelle Nunn, who was interning for a judge while deciding if she wanted to go to law school."

The group's articles of organization did not list Nunn on its board of directors in June 1989. 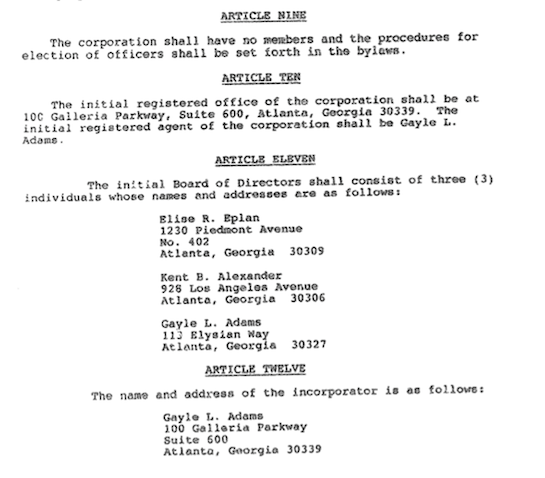 A 2009 AJC story suggests that the group's founders were not affiliated with Nunn before hiring her:

With success came new problems. They were growing beyond what they could manage out of Eplan’s apartment and began looking for someone to run the organization.

Deva Hirsch, one of the founders, said, "We had heard about this great young woman, Michelle Nunn, who was considering going to law school but had her heart in nonprofits."

She and Eplan met Nunn for lunch.

Maybe the real story is a more complicated, less politically viable one than Nunn would have us believe?