No Country for Old Men vs. The Counselor

Plot points for both No Country for Old Men and The Counselor discussed below.

I re-watched No Country for Old Men last night, in part because I've been somewhat befuddled by the disparity in the reactions to that film (90 percent fresh from top critics on Rotten Tomatoes) and The Counselor (20 percent fresh). They are remarkably similar movies (more on that momentarily), so I was curious to see what critics who hated the latter said about the former.

"A literate meditation (scary words for the Transformers crowd) on America's bloodlust for the easy fix," wrote Peter Travers in Rolling Stone about No Country. The Counselor, meanwhile, is "a droning meditation on capitalism in the form of a thriller about cocaine trading on the Tex-Mex border. … The emphasis on talk leaves the words no room to breathe, much less resonate."

"The down-home Texan-flavored dialogue—some of it lifted directly from the book—is comfortingly familiar and serves as a jarring counterpoint to the onslaught of hideous violence. … as powerful and thought-provoking as it is genre-bending," wrote Claudia Puig of USA Today about No Country for Old Men. "Never did drug lords, thugs and cowboys wax as philosophically as they do in The Counselor. … It certainly doesn't make them in any way believable. Nor does it make them any more intriguing to watch. Everyone's speech is awash in gaudy psycho-blather and Yoda-like observations," Puig complained about The Counselor.

"An intense, nihilistic thriller as well as a model of implacable storytelling, this is a film you can't stop watching even though you very much wish you could. That's because ‘No Country' escorts you through a world so pitilessly bleak, ‘you put your soul at hazard,' as one character says, to be part of it," wrote the Los Angeles Times‘ Kenneth Turan in 2007. "As cold, precise and soulless as the diamonds that figure briefly in its plot, ‘The Counselor' is an extremely unpleasant piece of business. You could call it ‘Three Beheadings and No Funeral,' but even that doesn't give an accurate idea of what you're in for," he wrote in 2013.

I find Turan's words especially intriguing, given that his description of No Country for Old Men could apply almost word-for-word to The Counselor. Scott's film is implacable and punishing, the cinematic version of the bolito that serves as the film's secondary metaphor.

The Counselor‘s primary metaphor, of course, is the crossroads. At one point we see a band of drivers sitting in the dirt, sketching out a four way road: this way leads to one destination; that another. Once you make your decision, there is no going back. The metaphor is more explicitly sketched out verbally by a drug lord who explains to Michael Fassbender's titular lawyer that the path he has chosen has set him hurtling, unstoppably, toward tragedy:

I would urge you to see the truth of your situation, Counselor. That is my advice. It is not for me to say what you should have done. Or not done. I only know that the world in which you seek to undo your mistakes is not the world in which they were made. You are at a cross in the road and here you think to choose. But here there is no choosing. There is only accepting. The choosing was done long ago.

The crossroad also appears repeatedly in No Country for Old Men. Sometimes it appears subtly, as when Llewelyn Moss (Josh Brolin) is on the hunt. He has wounded, but not killed, an antelope. It goes scampering off into the desert. Moss follows the beast's bloody trail; a drop here, a drop there. And then, suddenly, a bright streak of red going crosses the pale red path he has been following, headed 90 degrees the other way. 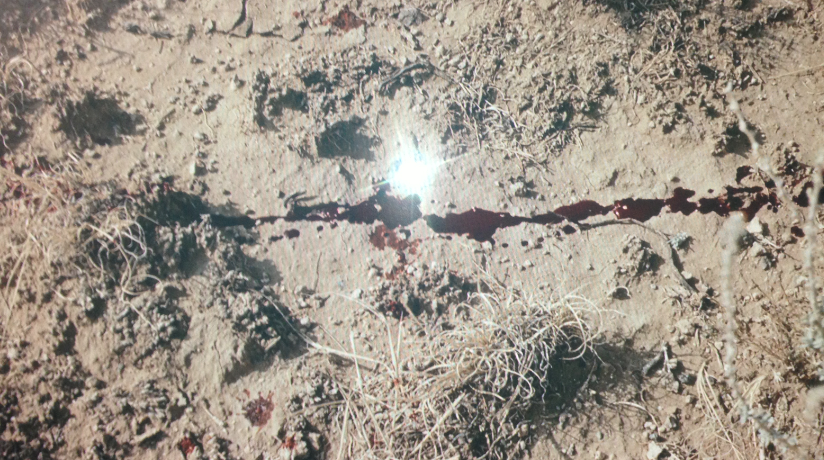 Apologies for the glare; I'm not exactly working with a professional editing suite at home

Moss has a choice. Continue with his normal life and follow the antelope. Or follow the bloody trail he knows nothing about. At the crossroads he turns left instead of going straight ahead. It is a decision that will cost him, one that sets in motion a series of events that he can only accept, not alter.

The philosophy is not always this subtle in No Country for Old Men. Indeed, it frequently comes just as indelicately there as it does in The Counselor. The coin toss scene is, of course, the most famous:

But it's by no means the only time. Consider Anton Chigurh's (Javier Bardem) conversation with Carson Wells (Woody Harrelson):

Anton Chigurh: And you know what's going to happen now. You should admit your situation. There would be more dignity in it.

Carson Wells: You go to hell.

Anton Chigurh: [Chuckles] Alright. Let me ask you something. If the rule you followed brought you to this, of what use was the rule?

Carson Wells: Do you have any idea how crazy you are?

Anton Chigurh: You mean the nature of this conversation?

Carson Wells: I mean the nature of you.

Chigurh has a similar conversation about the inevitability of the paths we choose to follow later on with Moss' widow; her refusal to partake in his worldview does nothing to save her.

Part of the reason critics (and audiences) are more likely to accept the existential absurdity of Anton Chigurh than they are of the more impersonal forces at work in The Counselor is that he is a character in a Coen Brothers film. He is a force of nature like Leonard Smalls (Randall "Tex" Cobb) in Raising Arizona, funny and terrifying and implacable all at the same time. Diluting the existential dread with a pinch of humor allows the audience to relax a bit.

While Scott and McCarthy dabble occasionally in comedy—the scene in which Cameron Diaz's character has sex with a car, and the looks they inspire from Bardem, could have easily been found in a Coen Brothers film; Fassbender's repartee with an inmate played by Rosie Perez elicits a grin—they toss it aside as the film relentlessly marches forward. That relentlessness makes it hard to stomach. But the very discomfort felt by audiences shows just how effective the picture is. It sets out to portray a bleak, unforgiving world. And it succeeds in doing so as well as almost any film I've ever seen.