There is however, one easy and not particularly original fix that would dramatically enhance the media's respectability and restore a modicum of sanity to public discourse. Simply ban four words, and every possible variation thereof, from all media content.

Here's an example, via CBS News:

The words I'm talking about are not "plus-size model in bikini." They are littered throughout the text of the article. (Emphasis added.)

Gillette is making waves with a photo it tweeted of an obese woman posing on a beach in a bikini, with her curves and cellulite on full display.

The razor maker last week posted the image of Anna O'Brien, a plus-size fashion, fitness and lifestyle blogger, under its @GilletteVenus handle, captioning it, "Go out there and slay the day." Some Twitter users said the ad glamorizies obesity and that Gillette is "irresponsibly" promoting an unhealthy lifestyle for profit.

"This woman will die of heat disease before @potus completes his second term. I hope she's just as happy and carefree for her last 6 years of life. Everybody should live themselves, but lets not call it healthy," one twitter user wrote…

Some commenters defended O'Brien while keeping their aim focused on Gillette. "There's no reason to be rude or unkind to someone who is obese and there is no reason @GilletteVenus should be encouraging life threatening obesity. This would also be true if they used an anorexic model. I wish the model they used well but Gillette should know better," @robbystarbuck said…

The company's effort to promote inclusive notions of beauty seemed to have backfired, with some users writing that they would no longer buy from Gillette.

"Wow, this is so unhealthy! Obesity causes cardiovascular diseases, type 2 Diabetes, sleep apnea, depression & certain types of cancer and death. Why would you show younger girls a picture like this? Another reason not to purchase your products! @lovinbeauty wrote.

Reasonable, well-adjusted individuals know in their hearts that this is vacuous bullshit. The media have desecrated innocent words and stripped them of all meaning. "Outrage" is used to describe hundreds of thousands of Venezuelans marching against a corrupt dictatorship, but also a handful of Twitter users typing words at a corporation's social media intern, most likely while sitting on a toilet.

Why? Because it makes for a better headline than, "Joan Rogers weighs in on Gillette tweet." Wait, who? Oh, you mean the self-described "Pro Beauty, hair, skin, Botox, Fillers salon fashion fitness wear travel Vegan juicer Zumba weights" who tweets under the (unverified) handle @lovinbeauty to her 1,845 followers.

If the words "one twitter user wrote," appears anywhere in a story, no one needs to read that story. Same probably goes if the words "sparks outrage" appear in the headline. The media would instantly regain some respectability by simply refusing to publish them anymore. Just stop. Seriously. 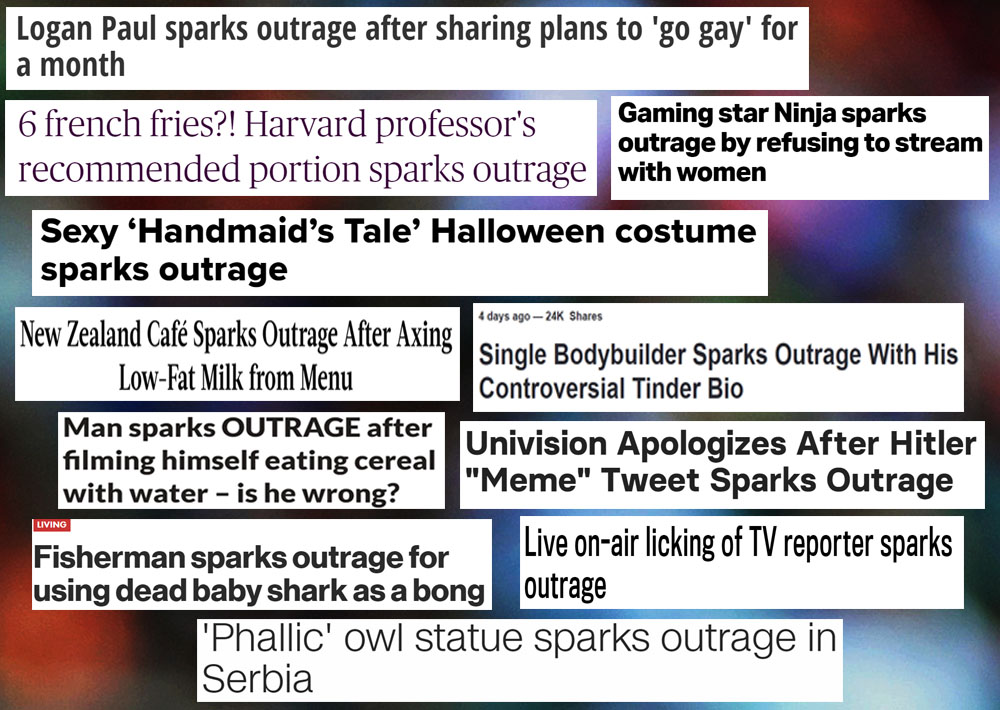 No one needs to tweet, for that matter. And yet, we click on the links, type the words into a box and press send. We are outraged by the outrage, and so on. The media is just giving us want we want. We are doomed.

MORE: Gillette the Dogs Out? Woke ‘Man’ Brands Are the Future of Corporate Advertising