As the world burns, President Obama is taking criticism from all sides. Even Salon editor (and Free Beacon aficionado) Joan Walsh has conceded: "I’d probably have suggested not golfing after [Obama’s] moving statement on journalist James Foley’s execution."

Of course, most of this criticism is due to the prevalence of social media, but even so, Obama defenders have returned to one of their favorite arguments: Criticism of our current president is unprecedented; literally no one criticized the sitting president until 2009.

Did Franklin Roosevelt play a lot golf during his presidency? Franklin. Roosevelt. Whatever, don’t want to step on the narrative. And we all know that George W. Bush was never criticized for golfing.

For some reason, this blog post from 2013 is making the rounds on social media. It’s called "A Canadian’s View on Our Disrespect of President Obama’s Presidency." The Canadian is William Thomas, an "author, a scriptwriter and a nationally syndicated humour columnist," and the post is utter, ahistorical nonsense—in other words: perfectly in keeping with the "criticism of Obama is unprecedented" crowd!

It’s not a new idea by any means, but it deserves refuting every time it rears its head. Here’s Thomas:

There was a time not so long ago when Americans, regardless of their political stripes, rallied round their president. Once elected, the man who won the White House was no longer viewed as a republican or democrat, but the President of the United States. The oath of office was taken, the wagons were circled around the country’s borders and it was America versus the rest of the world with the president of all the people at the helm.

Suddenly President Barack Obama, with the potential to become an exceptional president has become the glaring exception to that unwritten, patriotic rule.

Obama, the Canadian writes, is being "treated with the kind of deep disrespect to which no previous president was subjected." So he's presumably suggesting that 2000 and 2004 were years in which "Americans, regardless of their political stripes, rallied round" President George W. Bush—you know, the guy who "stole the election," had liberals threatening to move to Canada, and inspired assassination-themed fan fiction. Ok, fine, but people these days are just way meaner to Obama:

The health-care debate, which looked more like extreme fighting in a mud pit than a national dialogue, revealed a very vulgar side of America. President Obama’s face appeared on protest signs white-faced and blood-mouthed in a satanic clown image. In other tasteless portrayals, people who disagreed with his position distorted his face to look like Hitler complete with mustache and swastika.

Odd, that burning the flag makes Americans crazy, but depicting the president as a clown and a maniacal fascist is accepted as part of the new rude America.

A very vulgar side of America, indeed. Something we hadn't seen in, oh, at least one or two years: 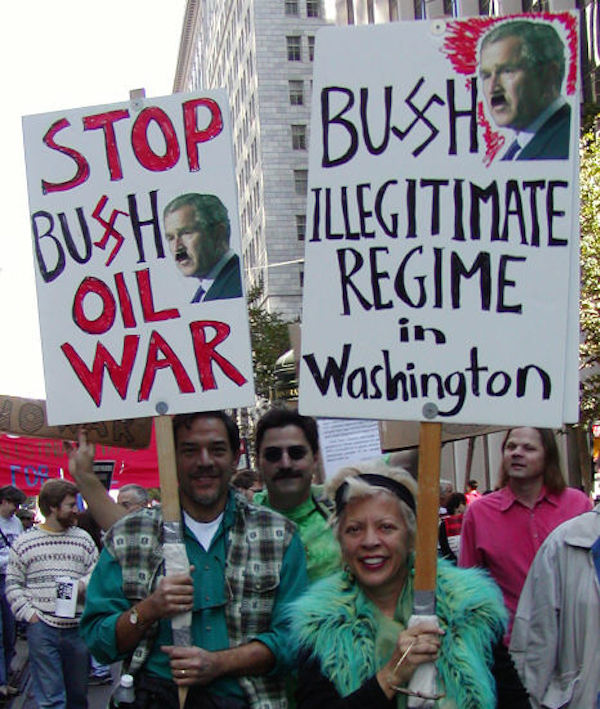 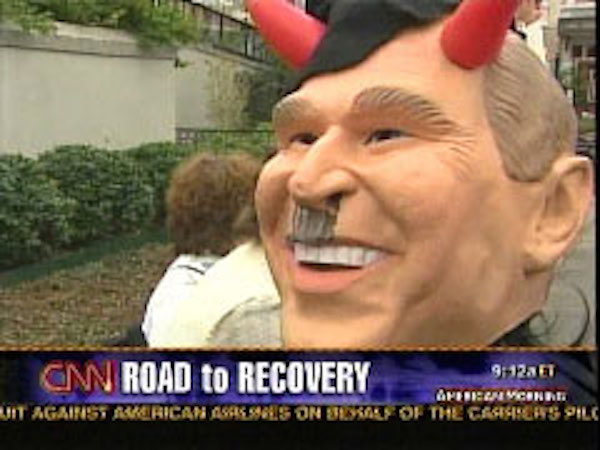 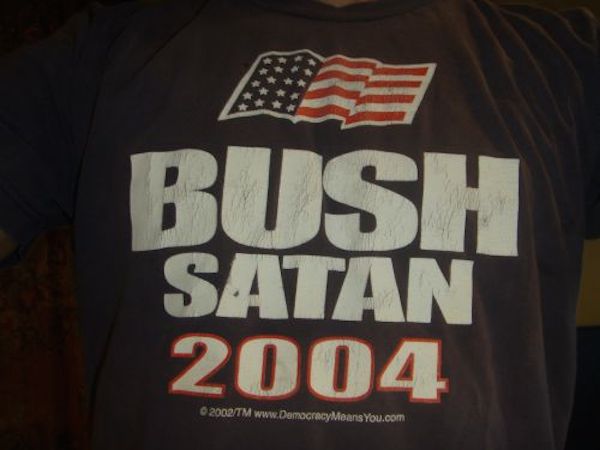 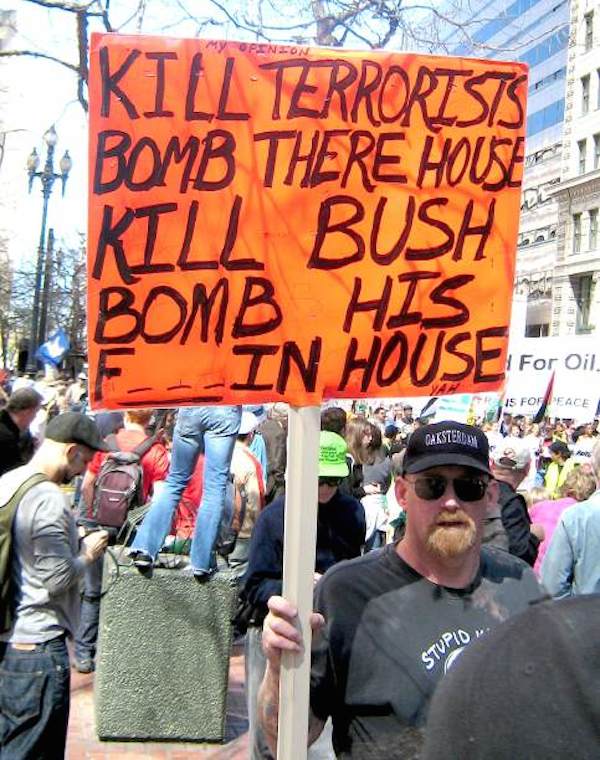 That's merely a small sample of some of the least offensive examples of anti-Bush hysteria. Canadian Guy goes on to explain, presumably without a hint of irony, why liberals didn't consider any of this to be an outrageous affront to decency at the time, and still don't.

Because it's totally legitimate to impugn the integrity, honestly, and morality of an elected leader if that elected leaders really does lack those qualities!  It's not wrong to accuse the president of being a Nazi if he's behaving like an actual Nazi! A "Bush=Hitler" poster is speaking truth to power, while an "Obama=Hitler" poster is an unprecedented attempt to delegitimize a Nobel Peace Prize-winning oratorical genius. This is a fitting summation of a liberal worldview that sees conservatism as a uniquely evil force that must be confronted and defeated, and Obama as a uniquely divisive figure (because of racism, etc.), which explains why so many people are sharing the post.