Joss Whedon—the director of The Avengers and Avengers: Age of Ultron—is generally considered to be a friend of both nerds and women. This is, after all, the guy who created Buffy the Vampire Slayer and Dollhouse, amongst other cultural artifacts. He's also the guy who made the most interesting character in The Avengers—a movie about gods and billionaire playboys and war heroes—a woman with no superpowers. And he's frequently gone to bat against the supposed enemies of the feminist left! He hates GamerGate! He thinks Rethuglicans are dumbos! He says so frequently!

That track record meant bupkis, however, to the perpetually outraged. The takes on Avengers: Age of Ultron have been particularly hot. It is extremely problematic.

For instance, it features a female character who is sad that she has been sterilized. Quelle horreur!

Did we really need Natasha to have a mini-breakdown over the fact that she can't have children? Haven't we gotten to a point where the one lonely female superhero in our current landscape can just pursue the business of avenging without having to bemoan not being a mother?

I know, right? Giving birth is a choice, and the only acceptable choice is to not feel bad about not doing it. Feeling sad about not being able to give birth to a child is unacceptable! Such emotions are a mere societal construct and have absolutely nothing to do with biology. Certainly Whedon would never write about a male character who is struggling with a conflict between his desire to be around children and his feelings of loyalty to the team! Oh, wait: 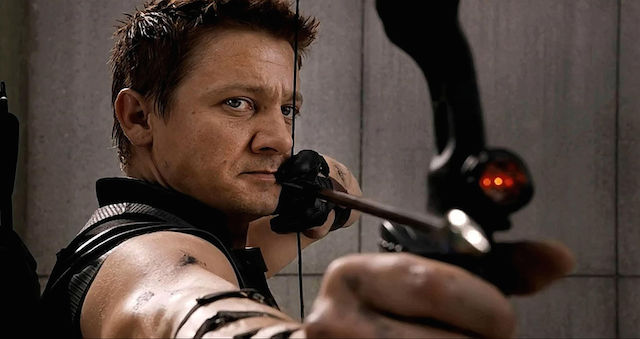 I forgot! There was a whole extended subplot in Avengers: Age of Ultron about Hawkeye's wife and kids and how he missed being around them. Weird.

Whedon also made the mistake of … having one of the villains of the film realize the error of her ways. No, seriously. The Scarlet Witch is a free-thinking spirit who must be crushed by the patriarchy for not understanding her place, according to BuzzFeed's Ariane Lange:

Her situation is reminiscent of the beginning of European prosecution of "witches," coinciding with the government deciding "population" was its business. The crimes of witches were often crimes of reproduction — infanticide, abortion, birth control. Women were assigned an imaginary power — witchcraft! — in order to stoke fear, crush them, and deprive them of real power. In a similar way, Olsen’s Scarlet Witch is given power — mind-reader and mind-manipulator — only to have it rhetorically diminished ("That little witch is messin’ with your mind") and subsumed under the dominant team.

Oddly, Whedon got tired of being harangued on Twitter by people who spend their days searching for things to be angsty about. So he shut down his account. The Mary Sue's commenters didn't understand why he wasn't more open to their brilliant insights!

Weird. I can't imagine why he'd just want to be left alone.

Update: Ugh, I forgot about this:

.@SonnyBunch You forgot his very problematic rape joke, which is understandable since you're a man and prob laughed http://t.co/qfOXZAMtmA