About a year back, I remember seeing two tweets come across my feed that summed up perfectly the level of discourse some liberal comedy show hosts bring to the table.

Great to stop in for a quick haircut at @redsbarbershop in Indianapolis! pic.twitter.com/oULTXrVerX

To recap, then-Indiana Governor Mike Pence posted an innocent, noncontroversial picture of himself getting a haircut. And a year later, Netflix's Chelsea Handler responded with a non-sequitur and typo, in what I can only presume is an attempt at humor. (It's funny, because she used the f-word? I think?)

What exactly was so bad about the fact that Pence once got a haircut? Was that really an attack worth launching? Handler didn't come off as either a comedian or an incisive pundit, she came across as a thin-skinned child. It was a futile scream into the aether of social media at the mere sight of a hated foe.

Which brings us to BundoGate.

Every Monday morning I am greeted with headlines that say John Oliver has eviscerated, owned, slammed, obliterated, and dunked on the latest villain, usually while saying "f—k." That said, I cannot swear that the show is anything more than a nine-minute clip transmitted to clickbait sites on a weekly basis.

The most recent viral clip focused on the following horror of horrors: Mike Pence's daughter has come out with a book about his rabbit, Marlon Bundo. Marlon Bundo's A Day in the Life of the Vice President teaches children about the vice presidency. Proceeds go to a hospital art therapy program called Tracy's Kids and an abolitionist and anti-human trafficking organization, A21.

Watching his segment, you can actually tell that Oliver at first struggled to explain why the book was worth attacking in the first place. Eventually he found a reason, noting that the final stop on the Pences' book tour was at "Focus on the F—king Family" (which you can tell is funny, because he said "f—k").

"Congratulations, Pence, you even managed to ruin Marlon Bundo," Oliver says to a graphic of Mike Pence, who again, had nothing to do with the book. "Now none of us can enjoy a book about your rabbit," Oliver continued, forgetting the literal slaves this book is helping.

Focus on the Family has an entire division devoted to benign and apolitical children's entertainment with a Christian bent (like the popular Adventures in Odyssey program). But the group is also active in socially conservative causes. Charlotte Pence is politically moderate, but this thoughtcrime by association on one stop of the tour is reason enough for Oliver to spend a significant amount of time and resources riffing on a children's book about a bunny. Proceeds of which are directed to the needy.

Oliver responded by announcing his own version of the book, in which Marlon Bundo is a gay bunny ("just like the real Marlon Bundo," he notes), stopped from marrying another boy bunny by an evil worm who looks like Mike Pence. Oliver assured viewers that buying the book would be a way of saying "f—k you" to Pence (which is funny, because he said "f—k").

Proceeds for Oliver's book go to charities for AIDS research and LGBT teen suicide prevention. "Those are two great reasons to buy this book," Oliver noted. "Another is that selling more books than Pence will probably really piss him off, so that’s three great reasons right there."

Here's a secret: it really won't.

Pence doesn't care. Hardly a week goes by without some liberal celebrity promising that X or Y stunt will really make Pence angry. There's never been any reporting that it actually works. He's not Donald Trump, lashing out at every D-lister who holds up his severed head.

Some attacks appear to legitimately irk Pence, such as when The View host Joy Behar compared aspects of his Christian faith to "mental illness." But even in that condemnation, he remained soft-spoken and seemed more concerned about the millions of other Americans who were Christians, and he brought it up only after being asked about it. Behar eventually apologized.

But then there was the gay Olympian who declared he would refuse to meet with Pence to anyone who would listen (Pence's office says it never asked), the Broadway actors who singled him out in the audience (Pence said he wasn't offended), the Hollywood actress who donated to Planned Parenthood in his name and put him on their mailing list (take that, guy making minimum wage in the mail room!), and the attack on Pence at the Oscars (no response).

The same day as the rabbit stuff, I was informed that Mike Pence's day was RUINED because people at the parade he was at raised gay pride flags.

Yes, truly that is the face of a man whose day has been ruined.

Mike Pence hasn't responded to the Marlon Bundo nonsense, obviously; he's too busy welcoming home fallen soldiers. For her part, Charlotte Pence responded with an admirable grace. "I think imitation is the most sincere form of flattery," she said. "Also, in all seriousness, his book is contributing to charities that I think we can all get behind."

Wow, she and her mom were OBLITERATED. 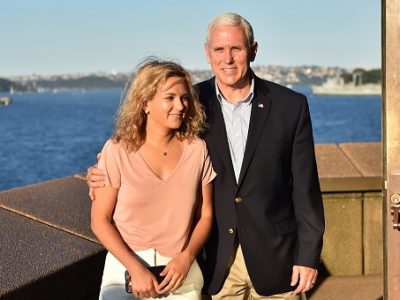