Here’s What We Know About Hillary Clinton’s 2016 Campaign

Politico’s Mike Allen has given us an inside look at the nascent Hillary Clinton presidential campaign. Allen's piece is the latest in a long line of stories explaining how formidable the 2016 operation will be, and assuring us that Hillary has learned from her disastrous failure in 2008. Here are five things we’ve learned about the campaign thus far:

1. Hillary loves power even more than she loves money

Allen reports that Clinton "never really hesitated" in deciding to run for president again. The likelihood that she will run reportedly went from 98 percent to 100 percent late last year.

The decision is somewhat puzzling, given Hillary’s well-document obsession with making money, and "getting houses." She has made millions on the public speaking circuit since quitting her job at the State Department, and has even scoffed at public university students who have protested the use of taxpayer funds to pay her exorbitant speaking fees. (After all, she already offers universities a special discounted rate of $300,000.)

Being the leader of the free world, on the other hand, only pays a meager $400,000 per year. Hillary's decision to forgo millions in future speaking fees is a curious one, which can only be explained by an even greater obsession with power and self-aggrandizement.

2. So many white bros

The Daily Beast’s Tim Mak notes that some Democrats are beginning to express concern about the conspicuous male whiteness of Hillary’s campaign. Pretty much everyone she has hired for a top role is a white dude:

One operative quipped that the top levels of the campaign are in danger of looking like "white dudefest 2016."

"If Hillary doesn’t begin hiring well-respected African-American or Hispanic political aides in top positions," said a senior African American Congressional aide, "I would imagine that people will really start to wonder if she is serious about covering her left flank. If that is the case they will look for a candidate who is eager to demonstrate that senior level inclusiveness is a high priority." 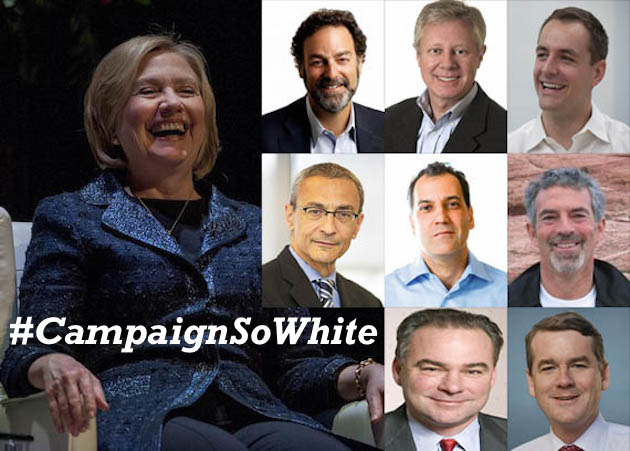 3. Hillary is obsessed with Hillary, and after decades in politics, still has thin skin

Allen reports that Hillary 2016 is determined to have a better relationship with the reporters, people she has previously described as having "big egos and no brains." At the very least, Allen writes, she wants "to have a ‘good cop’ role to help her get off on a better foot with the journalists who will help shape her image."

That may be easier said than done, given how obsessed Hillary seems to be with reading (and nitpicking) stories about herself:

Advisers know that Clinton doesn’t like or trust the press – and feels that it’s mutual. She remains a voracious consumer of news about herself, occasionally complaining about an article’s tone or omissions.

One of the few top campaign positions yet to be filled is that of communications director. Potential hires include Karen Finney, whose MSNBC show "Disrupt" was cancelled last year.

4. Hillary possesses an "instinctive insularity," according to dozens of close aides who won't stop speaking to the press anonymously

One of the reasons why Team Clinton wants to hire a media-friendly liaison is to serve as "a counterweight to the instinctive insularity of Hillaryland." This information was relayed to Allen via a number of anonymous aides close to Hillary who have spoken to a number of different reporters over the past several weeks about how awesome Hillary 2016 is going to be.

Actually, the rationale for Hillary’s campaign remains unclear, beyond the fact that she became a grandmother last year, and that made her think a lot about the future. According to Allen, now that a campaign architecture is in place, Team Hillary finally get to work "developing her message," whatever that may be.