This is a debate.

Anyway, Nolan Finley, a Detroit News columnist, made the very reasonable point that if you don't pay your bills, you don't get stuff. Here's Finley:

And yet barely 50 percent of Detroiters pay their water bill. Meanwhile, up to two-thirds of city residents pay to keep their cable or satellite television service current. And 72 percent do the same to maintain their cellphones.

It’s not a stretch to guess the reason delinquency rates are lower for cable and cellphone service is that the cable and telephone companies cut off customers who don’t pay their bills. The Detroit water department hasn’t done that much, until now.

So instead of using what resources they have to cover their needs, many water customers instead have chosen to service their wants. That’s what happens when people are conditioned to think someone else is responsible for taking care of them.

Pretty straightforward. If you don't pay your bills, you don't get things. And, in response to this extremely straightforward and commonsensical argument, liberals on Twitter lost their shit. Jamil Smith wrote it was "reprehensible." Kevin Roose was one of several to describe Finley as "the Grinch." Michael Cohen said it was "eight shades of ugly." VOX DOT COM‘s Dylan Matthews said it was "ghoulish." You get the idea.

As an explanatory journalist, I feel that it's my duty to explain how bills work. Please examine the flow chart below: 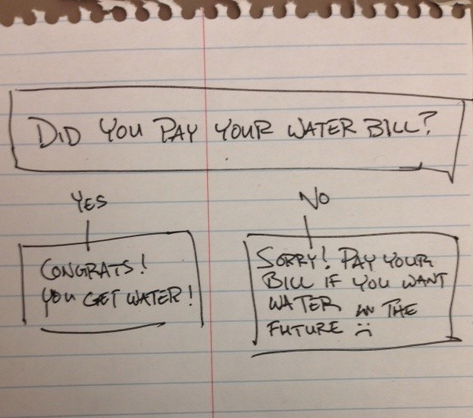 If you have any further questions, please send them to comments AT freebeacon DOT com. Bill paying is, apparently, a very difficult concept to master, so I am happy to provide remedial assistance to those who need it.

Update: Apparently no one at the United Nations understands how bill paying works either. I'm happy to provide Ban Ki-moon with immediate remedial bill-paying lessons should he inquire at the email address above. My door is always open.

CNN Reporter: ‘Controversial’ for Trump to Speak at Gettysburg Because He Defended Confederate Monuments

Iran Shuts Down Newspaper After It Questions Regime’s Coronavirus Numbers