My must read of the day is "A Tiny Alaskan Island Halfway To Russia Could Decide Control of The Senate," in Talking Points Memo:

Alaska is one of the standard-bearers of the 2014 midterms: a Democratic incumbent, Sen. Mark Begich, in a historically red state, relying on a robust and finely tuned ground game to carry him to what the polls would say is an unlikely victory. According to TPM's PollTracker average, Begich currently trails Republican challenger Dan Sullivan, 47.6 percent to 44.6 percent.

So as in other key battleground states like Colorado, Democrats are relying on a get-out-of-the-vote effort that they've been building for years to make up for their current deficit in the polling. That means they have to turn out those Democratic voters whom the polling and the history show often skip non-presidential election years.

This is where Bill Briggs and people like him come in. Briggs […] is the Begich campaign's volunteer on the ground on St. Paul Island. He is one of the hundreds of such volunteers who dot the far-flung Alaskan landscape. If what the Begich campaign says about its ground game is right, the election will turn on what Briggs and his counterparts in various native villages, fishing outposts, and isolated communities hundreds of miles apart from each other are able to accomplish. […]

"We've contacted every potential voter in rural Alaska. Every voter in Alaska who might not be politically active, but thinks Mark Begich is a good guy has been contacted by our field operation," Max Croes, Begich's communications director, told TPM. "It has been a crazy undertaking. It's never been done before."

Roughly .23 percent of the United States’ population lives in Alaska. At 571, 951 square miles the state is larger than all other forty-nine states when it comes to land area.

Most Alaskans live in the bigger cities, but you still have many living in remote areas, such as St. Paul Island, that are often not accessible by car. The toughest towns to reach are incredibly important, because, as the article notes, Begich won in 2008 by only 4,000 votes.

Candidates need every vote they can get here, and this article demonstrates how hard that is. It focuses on the challenge from the perspective of a Democratic field operator, but interestingly in many aspects it mirrors a conversation I recently had with a Republican staffer based in Alaska.

He was telling me what he thought about a piece in the New York Times called "Democrats Are Spending More on the Ground in Key Senate Race"—not surprisingly, he did not agree with it (and the RNC actually pushed back on the piece in a public memo). The people I spoke with contended that in Alaska, it’s immensely important to have people on the ground who are actually from the community because you’re trying to reach so many people in small, remote towns.

Their argument against the Times article was based on the notion that Republican "get out the vote efforts" were different than Democrats because Democrats primarily use staffers who are not Alaskan to go door-to-door, and Republicans rely on local volunteers. This, they said, was more effective and it was the reason they had fewer paid staffers in the state and Democrats were spending more money, but they were adamant that the Republican ground game was actually stronger.

Alaska is a hard state to campaign in and a difficult state to accurately poll, but with only sixteen days until the election one thing is increasingly certain—the state with less than one percent of the country’s entire population, spread across an area that is slightly more than twice the size of Texas, could easily decide who controls the U.S. Senate. 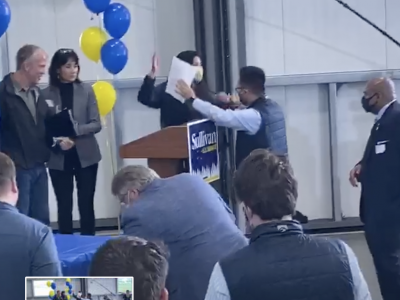