Have you ever played the party game Cards Against Humanity, noticed that a few of the cards were somewhat darkly humored and politically incorrect, and then decided to complain about it in a public forum? You’re not alone.

This actually happened, and one of the game's co-creators publicly apologized after someone complained in a "viral Tumblr post" about a card that was deemed "transphobic." Charlie Cooke explains why this is utterly ridiculous, as anyone familiar with the game ought to realize.

For those unfamiliar with the game, Cards Against Humanity is a party game created by drunk millennials for other drunk millennials. Buzzfeed has numerous listicles celebrating the game’s absurdity. Basically, it is Mad Libs for the deranged, with the goal being to create shocking, highly offensive, and (presumably) humorous word combinations. For example: 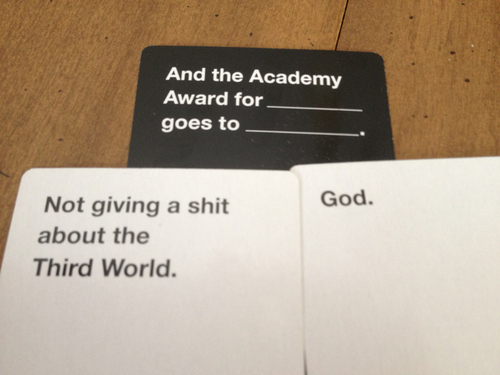 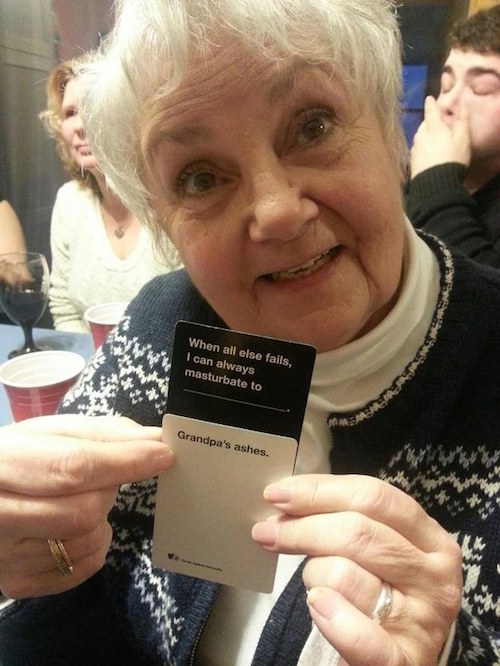 This point appears to be lost on, of all people, Cards of Humanity co-creator Max Temkin:

"We talk about the idea of ‘punching up, not punching down' all the time," Temkin said. "It's something that we stand behind: making fun of those power structures, because they're already powerful. Making jokes about rapes, making jokes about trans people, they don't have the same cultural power."

To that end, some of the newer cards have a decidedly social-justice-friendly edge: You can now play "heteronormativity," "the patriarchy" and "white privilege."

Fine, if boring liberals and the perpetually aggrieved insist on imposing their ruthlessly self-important/humorless standards on a game that is literally designed to shock and offend—cards include "Two midgets shitting in a bucket," "smallpox blankets," and "Auschwitz," to name a few—there should be a Cards Against Humanity expansion pack just for them. 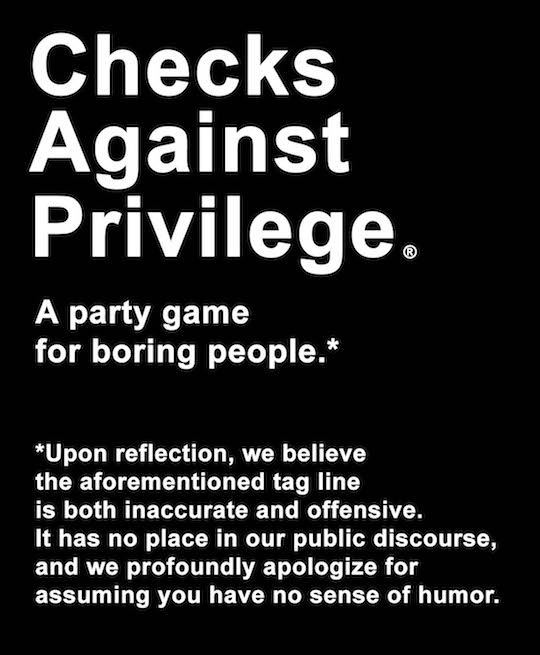 1. Begin a normal round of Cards Against Humanity.

2. As the white cards are being dealt, the dealer is encouraged to lead the group in a call-and-response session. ("Speak truth! / To power!" is one of our favorites.)

3. Before a black card is selected and read by the dealer, each player must write a "Privilege Check," which will be passed to left in the first round, to the right in the second, and then alternating accordingly until the 10th round, when players are permitted to write checks to individuals not participating in the game—living, dead, or imaginary. The goal is to allow each player to acknowledge their privileges, and to serve as a physical reminder of the real debts (both monetary and otherwise) they owe to society. For example:

4. After each player lays down a white card, the dealer will read each one aloud, and flip the hourglass to initiate a 90-second debate regarding each card's potential to offend a marginalized group. Please consult the Bloomberg Industrial Grievance Index for up-to-date grievance valuations.

5. Dealer shall ring the bell to mark the conclusion of the debating session, and request a show of hands to determine the most offensive card played that round. Simple majority wins. In the event of a tie, the dealer shall cast the deciding vote.

6. The most offensive card of the round, as determined by the community of players, will be ceremoniously burned in the General Electric Hate-sinner-ater™ (green compliant, sold separately). The player who played the offending card will be aggressively shunned for the next five rounds, at which point that player may issue a sincere apology. None of this "I apologize if I offended you" stuff. Alternatively, the group may vote to accept 15 Privilege Checks in lieu of an apology. Repeat offenders will be ejected from the game, and their cards distributed evenly among the community of players.

7. The dealer will determine which of the remaining cards wins the round. The player who played the winning card shall receive a 90-second critique from each member of the group. The winner shall do his best to empathize with the those who lost and think about what he could have done differently. The player is encouraged, though not required, to submit a written apology for the Official Record.

8. Each player will have three minutes to discuss what they learned during the round, after which the group shall reflect on how society could incorporate these lessons as part of a national discussion about bigotry. Privilege Checks issued at the beginning of the round will be read aloud and discussed. If a simple majority concurs, the dealer may initiate a 15-second "free session" during which players are invited to laugh.

9. After one round has been completed, the new dealer will ring the bell three times, and call a vote on whether or not to keep playing. The group must have unanimous consent to move forward. If one player votes to end the game, the game is over.