Senator Elizabeth Warren (D., Mass.) is fundraising off the Benghazi scandal, according to a Washington Free Beacon analysis (h/t Lachlan Markay). Check out this item posted on Warren's campaign website on Friday: 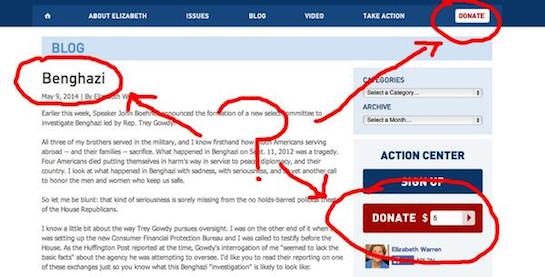 All three of my brothers served in the military, and I know firsthand how much Americans serving abroad — and their families — sacrifice. What happened in Benghazi on Sept. 11, 2012 was a tragedy. Four Americans died putting themselves in harm's way in service to peace, diplomacy, and their country. I look at what happened in Benghazi with sadness, with seriousness, and as yet another call to honor the men and women who keep us safe.

So let me be blunt: that kind of seriousness is sorely missing from the no holds-barred political theater of the House Republicans.

[Please give me money.]

Democrats are outraged that Republicans have sent out fundraising letters related to the newly established select committee to investigate the Obama administration’s response to the 2012 terrorist attack in Benghazi.

@jmartnyt @reince Glad I can help them fundraise off of a tragedy.

It is unclear how this will affect Warren's status as frontrunner for the Democratic presidential nomination in 2016.