EL PASO — I can see Mexico from my hotel. Like a fulsome bride, she shimmers in the distance. Su nombre: Heroica Ciudad Juárez. Bob Dylan once warned of visiting on rainy days in spring time. But the sky is clear. A stiff breeze rattles the window pane. Is it Mexican wind? Impossible to say without breathing it in. That’s why I’ve come. To search for answers. Here in Beto O’Rourke’s America.

It's Saturday. A depraved mob has descended on El Paso for the weekend. Dressed in ridiculous outfits. Cheering like maniacs. The authorities are out in force, blocking roads and redirecting traffic. A noxious stench hangs in the air. This horde has come to  partake in a vile perversion. To celebrate an un-American abomination. To engage in activities all true patriots should stand against.

My Uber driver, Carlos (Nissan Rogue), described El Paso as a "sleepy little town," and he wasn't wrong. Empty storefronts abound. The TCBY closes at 7 p.m. Carlos was reluctant to talk politics, but did offer a few observations on the hometown candidate: O'Rourke is an unusual surname for someone who goes by Beto. Donald Trump made fun of his arms.

Beto is in town to "launch" his presidential campaign, which he "announced" two weeks ago. A decent-sized crowd — several thousand, perhaps — has assembled downtown at the intersection of El Paso St. and Overland Ave., near the border with Mexico. Commercial offerings include Dave's Pawn Shop, the Golden Goose Tattoo parlor, and the Geneva Loan & Jewelry Co., which boasts an impressive collection of samurai swords.

A smaller crowd of Trump supporters is staging a counter-rally nearby. They jeer at Beto supporters and the "fake news" media. They call him "Francis" and "Beta O'Dork." Some of the signs involve conspiracies I've yet to encounter on the regular internet. 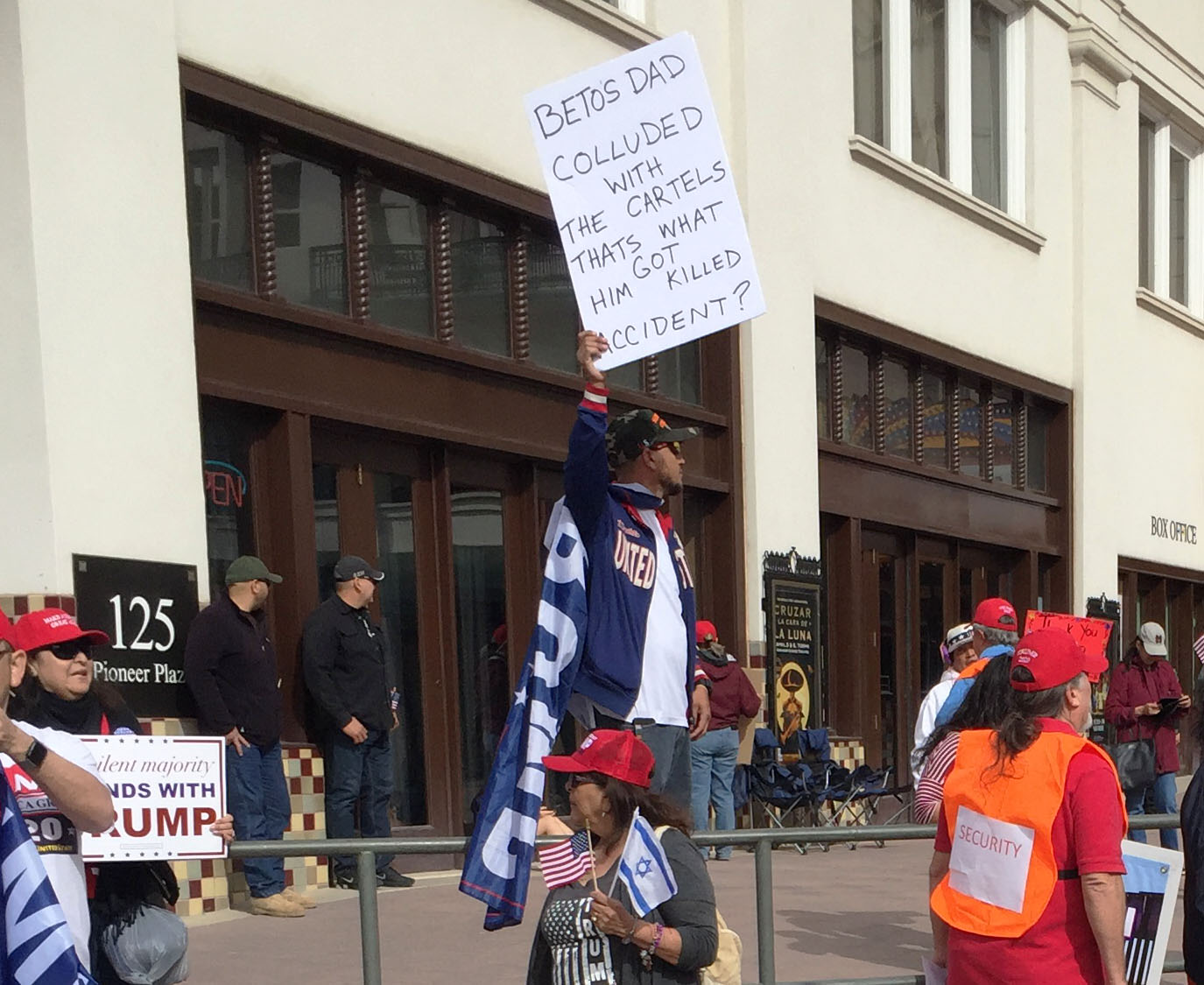 Both crowds are overwhelmingly Hispanic, like the town itself. I introduce myself to a MAGA-loving German Shepherd named "Freedom Fred." He's actually an "American Shepherd with German parts," I'm later told. And he doesn't like Democrats or gays. Beto has a dog, too. His name is Artemis. If you're looking for a clear depiction of America's partisan divide, this is it. 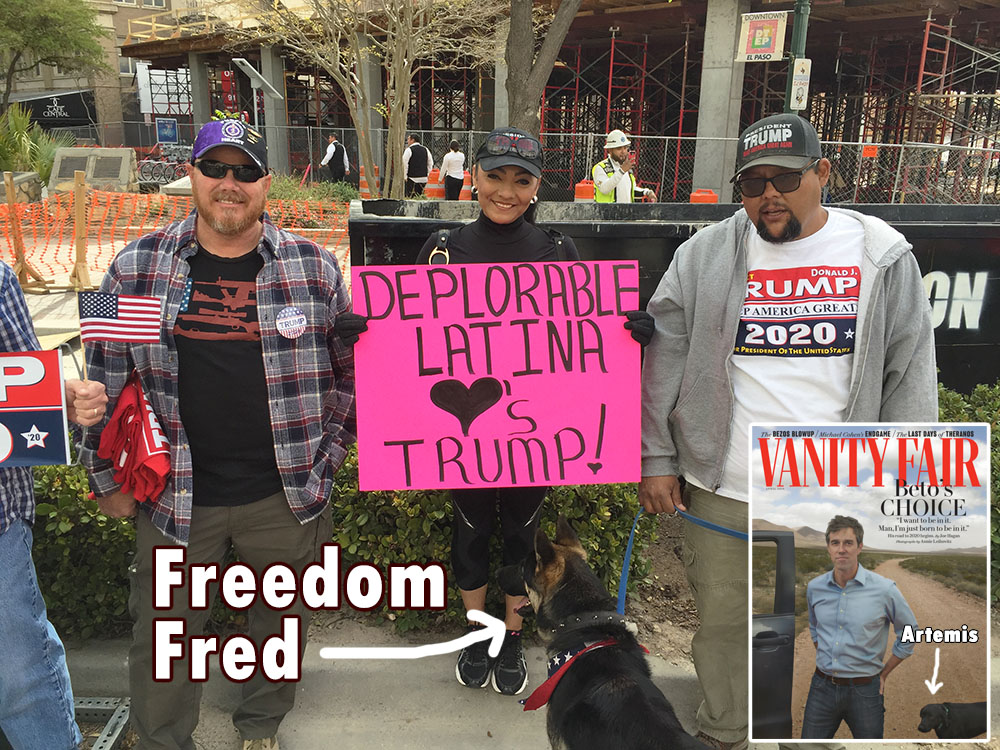 If Americans can't agree on dogs, perhaps they can agree on coffee. Two middle-aged Hispanic women decked out in Trump gear enter a Starbucks, the franchise formerly run by third-party front-runner Howard Schultz. One of the women drops her sign. A Beto supporter helps her pick it up. There could be hope for us yet.

Beto takes the stage. A large "HERO" sign looms above — the name of a local athletic store. He fits the bill. Sort of. He's introduced as a hometown kid from "the capital of the border, the new Ellis Island," in the words of Rep. Veronica Escobar (D., Texas). That's fine. But if you were casting a movie role based on that description, for example, and ended up hiring Robert Francis O'Rourke, you'd be #cancelled in a heartbeat. 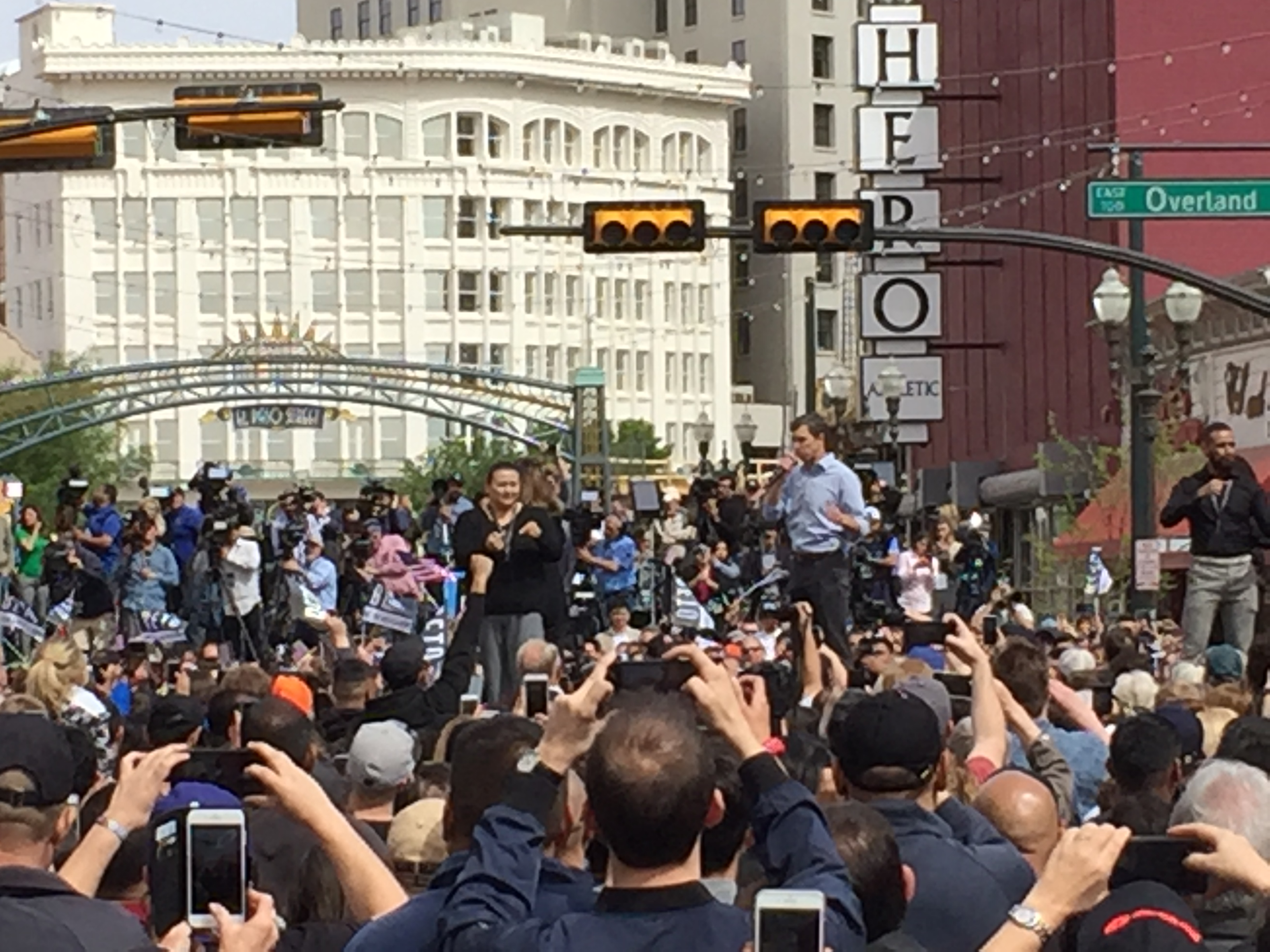 Trump was onto something re: those arms. Like a coked-up poetry professor explaining iambic pentameter to a bunch of nerds, Beto pounds out syllables with that trademark politician's fist. You know the one. With the nubby, upturned thumb? That one. He says we've been at war with Iraq for "27 years and counting." But he says it with passion, which counts for something. It's a rousing speech, and the crowd is appropriately enthused as they wander off to peruse the merch. 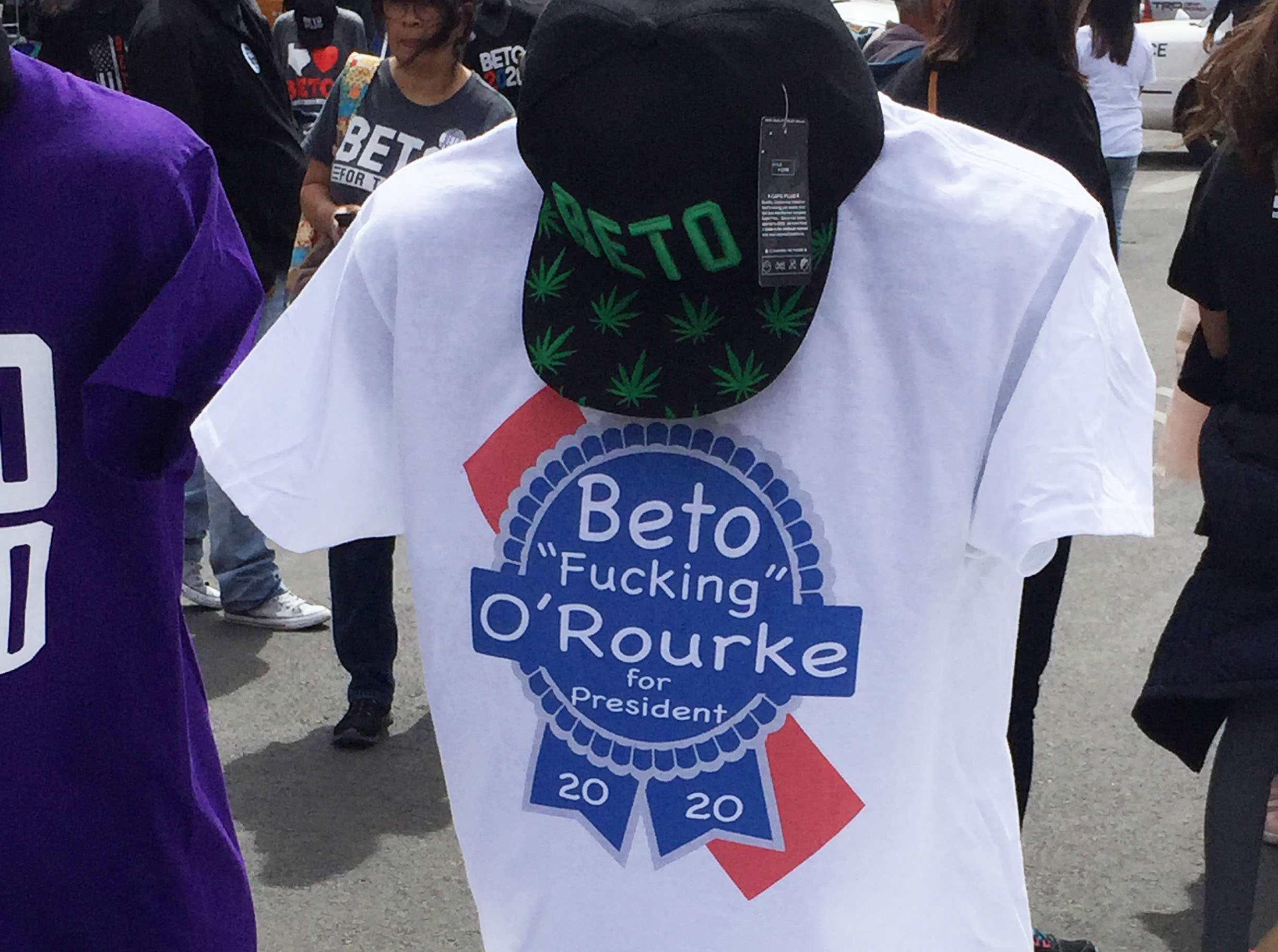 Music is on my mind as I pay 50 cents to cross the bridge into Mexico. I wonder if James Taylor ever made it here. He seemed to really want to go. It's about a 15 minute walk to the "world famous" Kentucky Club, where Beto and his wife Amy ended up on their first date. Not a bad choice, to be honest. The bar looks sturdy enough to stand on, but awfully narrow. The margaritas are cold and delicious. Someone plays "Don't Stop Believin'" on the juke box while some poor gringo struggles to order "dos beers." 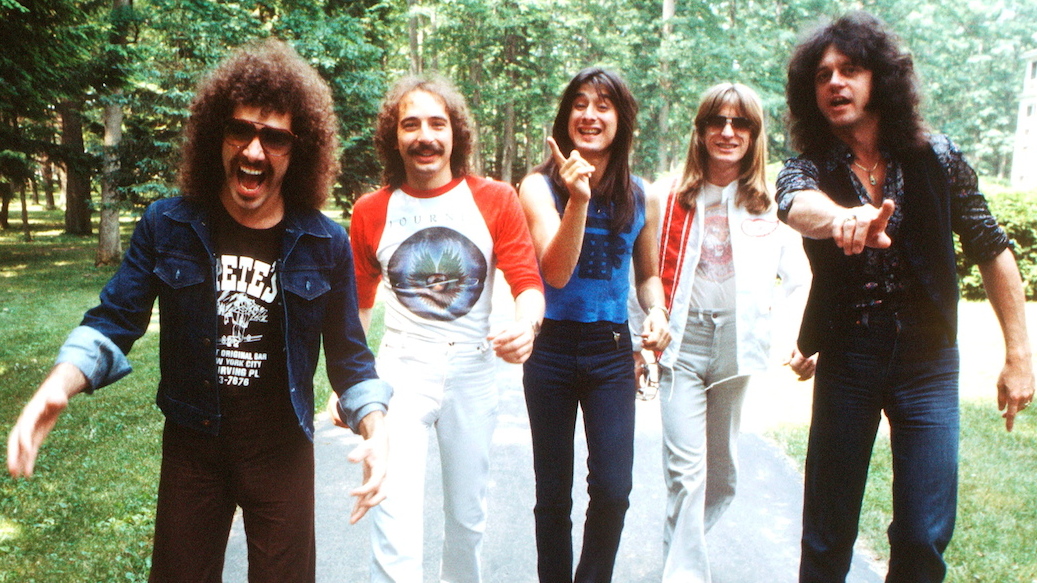 Suddenly it hits me. That line, "born and raised in South Detroit." There's really no such thing, geographically speaking. South Detroit is actually Canada. Just like "South El Paso" is actually Mexico. Astonishing, these moments when everything just connects and makes you go "Awww!" 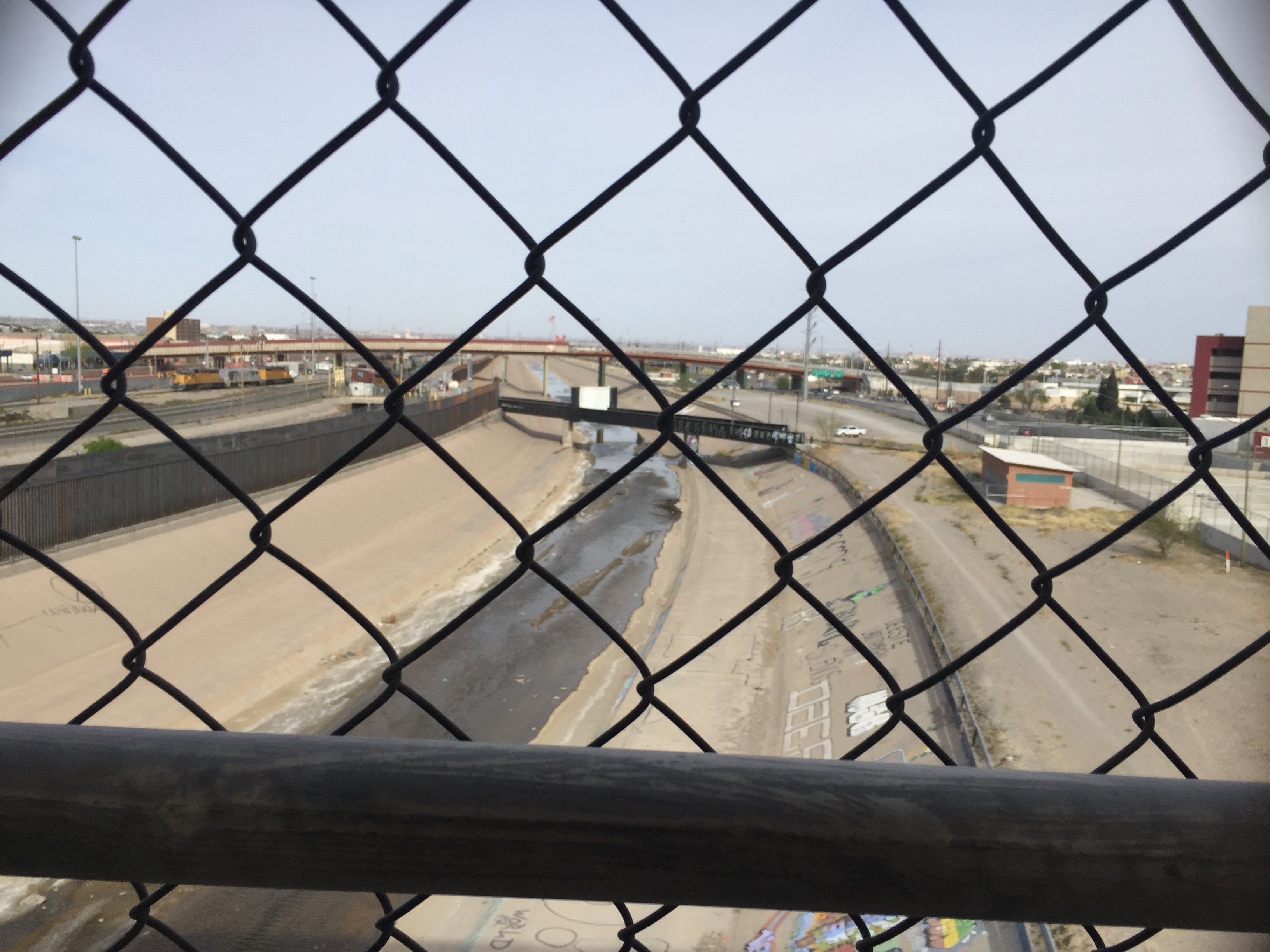 Another revelation on the way back to my hotel. The Democratic primary is a lot like this godforsaken bike race. Beto is towards the front of the pack for now, just behind Bernie Sanders and Joe Biden's hologram. The rest of the field is bunched up in the back, gasping for relevance. Julián Castro is off the side, trying to convince a race official that he's actually registered. Meanwhile, Donald Trump is driving the pace car, chugging Diet Coke, tossing Big Mac wrappers out the window, and waiting for the right moment to slam on the brakes.

This race has barely started, so settle in. Because when you're sure it can't go on any longer, they'll just roll out the flood lights and keep pedaling. 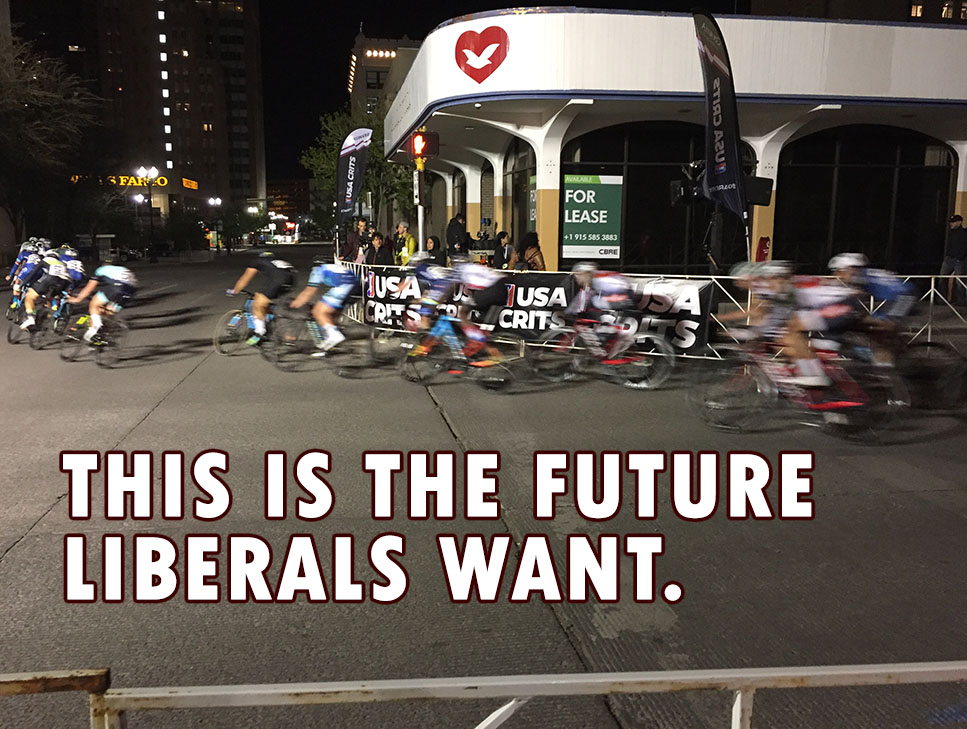