A cable news network defines itself by how well it covers a breaking news story. That's why it's instructive to evaluate CNN's performance during Tuesday morning’s developing story of the bloody terror attacks in Jerusalem.

In short: CNN is a disgrace and our nation deserves better.

Ted Turner's vision of an all news network was based on the premise that when major stories of international importance broke, all eyes would go to the primary source of news and information. It's what made CNN a household brand.

On its face, Tuesday's tragic events in Israel should have been the time for the original news station to shine. It was a terror attack with enormous implications for the region. It involved three Americans who had perished, making the story even more relevant to the U.S. audience.

And it played out with a larger international political backdrop as Secretary of State John Kerry was preparing to negotiate with Iran over their nuclear programs. As initial reports suggested the attacks were the responsibility of Iran-financed Hamas terrorists, the larger geopolitical narrative played perfectly into CNN's tradition of news and in-depth analysis.

As the story unfolded, CNN's Internet team posted a news story detailing the facts surrounding the attack. The headline for the story, captured by Truth Revolt, was the first of a series of incompetent errors that revealed just how far CNN has fallen:

Of course, the "2 Palestinians killed" in the attack were the murderous, rampaging terrorists who hacked their victims to death after storming the synagogue armed with axes, knives, and pistols. The headline suggests that the murderers were victims of the attack or that their deaths were somehow equated to the innocent victims of their savagery.

Next, CNN broadcast Jerusalem Mayor Nir Barkat’s condemnation of the attack at the scene of the horrible crime. National Review points out that the floundering network ran a chyron on the bottom of the screen informing their world-wide audience that the attack had occurred at a mosque rather than a synagogue. 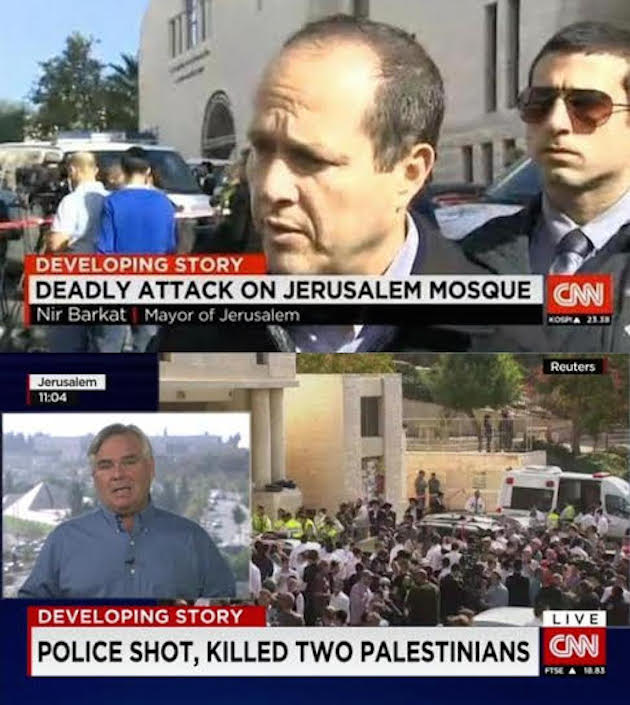 Both of these ridiculous errors could just be written off as sloppy work and negligent fact-checking. Of course, websites have editors to ensure errors like this don't get published. TV shows have producers who review on-air content before it hits the screen. Accidents happen. Maybe CNN was just having a sloppy morning.

The interview, captured by the Right Scoop was an example of a host attempting to be provocative and opinionated (not a bad thing on its face). But this host was so ill-informed and hysterical that Mr. Dershowitz had to actually educate her on the basics of the Middle East conflict and even the formation of Israel.

Banfield attempted to rationalize and even legitimize the Palestinian terrorists' claim that every Israeli civilian was a viable target for brutal murder since Israeli law calls for forced conscription for all adults. Dershowitz calmly pointed out that such an evil perspective would legitimize the targeting of a three-year-old child since they would eventually be a soldier, one day.

Banfield also displayed ignorance of the fundamental nature of Israel as a "Jewish State" by conflating the Jewish religion with Jewish ancestry. She wrote off the conflict in the region as being all about religion and referred to Israel as a religious state. When Dershowitz explained that the country had been founded by a group of avowed atheists, she tried to protest, pointing out they were Jewish. Dershowitz then explained that "Jewish" does not exclusively define a person as a follower of the Jewish faith. How he remained so calm, I will never know.

There's no producer or editor alive who can fix Ms. Banfield's astounding and offensive display of ignorance with regard to the Israeli/Palestinian conflict, or her remarkable lack of historic and political acts surrounding the formation of Israel and the Jewish people as an ethnicity. Does Banfield think Hitler killed Jews based on their religious convictions rather than the make-up of their ancestry?

In these few hours of coverage CNN displayed itself for literally all the world to see. And what we saw was a facade of a news network going through the motions and getting it wrong, time and time again. And we deserve better.

This criticism should not be taken as merely a gleeful attack on sloppy journalism at a left-of-center media outlet. Quite the opposite: What has happened to CNN saddens me. I am a conservative. I love the free market and I applaud competition. I don't think it's healthy for Fox News to dominate as much as they clearly do. Competition is good. And there is a place for CNN (or something like it) to thrive and to force Fox News and other competitors to constantly strive for excellence.

Having a legitimate alternative to the now-dominant Fox is vitally important for the political and cultural dialogue in our country. More voices and more ideas are to be encouraged. We shouldn't celebrate the demise of CNN, we should be alarmed by it. And, hopefully, those in charge of the network will start opening their doors to talented journalists and commentators from all political perspectives to help salvage the remnants of a once-mighty operation.