Justice Department nominee Kristen Clarke last week said she regrets attacking two senators whose votes she will need for confirmation and having believed the Jussie Smollett hate crime hoax, according to a committee questionnaire obtained by the Washington Free Beacon.

Clarke offered the mea culpa in written responses she submitted to the Senate Judiciary Committee on April 26. Republican senators asked Clarke about combative tweets she published about Sen. Joe Manchin (D., W.Va.) and Sen. Lisa Murkowski (R., Alaska). They also pressed her about her social media posts from 2019 saying that Smollett was the victim of an anti-gay, anti-black hate crime. Smollett was later charged with filing false police reports after two men came forward to say the actor paid them to stage the attack.

If confirmed, Clarke will oversee federal investigations into hate crimes, racial discrimination, and police brutality. Clarke has already faced scrutiny over racially charged remarks she made in college, as well as for her more recent criticism of police. She also gave seemingly inconsistent answers in her written response to the Judiciary Committee about the extent of her involvement in a 1999 conference where several cop killers were hailed as political prisoners.

Clarke targeted Manchin and Murkowski over their votes to confirm two Trump nominees. She accused Manchin in February 2017 of using "hollow words" when he offered praise for Martin Luther King Jr. Clarke was upset that Manchin had voted to confirm Jeff Sessions to serve as attorney general.

Clarke responded to questions about her tweets from Sen. Chuck Grassley (R., Iowa).

"In retrospect, I regret the tone I occasionally took," she wrote Grassley, who is the ranking Republican on the judiciary panel. Clarke said she planned to "turn down the volume and lower the temperature" in the future.

Clarke locked her Twitter account last month, but the Free Beacon obtained screenshots of the tweets in question. Neither Manchin’s nor Murkowski’s offices responded to requests for comment about Clarke.

Other high-profile Biden nominees have had their nominations either derailed or slowed down because of inflammatory social media posts. Manchin and Murkowski nuked Neera Tanden’s nomination to serve as director of the Office of Management and Budget because of her politically charged Twitter commentary.

Colin Kahl, the undersecretary for policy at the Pentagon, squeaked through confirmation after facing scrutiny over his Twitter activity. Clarke will likely need support from Manchin and Murkowski, both moderates, in order to secure confirmation to the influential civil rights post.

"Like many others, I fell for Mr. Smollett’s hoax and in retrospect I regret having made that statement," Clarke wrote. "Hoaxes distract attention away from the real incidents of hate crimes which are a growing threat in our country."

Clarke posted her support for Smollett in a tweet on Jan. 29, 2019, saying that he had been "subjected to a racist and homophobic attack" by two white men.

The disgraced actor had claimed that two white Trump supporters poured bleach on him and put a rope around his neck during an attack outside his apartment in Chicago. Two of Smollett’s friends, both of whom are black, later told police that Smollett paid them $3,500 to stage the assault.

Clarke did not address other comments she made about the Smollett case in her response to the judiciary panel, including a tweet criticizing Chicago police early in the Smollett investigation for requesting access to his cell phone.

"This is NOT how you treat survivors of a hate crime. Stop demonizing survivors and casting doubt on their claims if you want communities to trust that you will take #HateCrime seriously," she tweeted on Feb. 1, 2019. 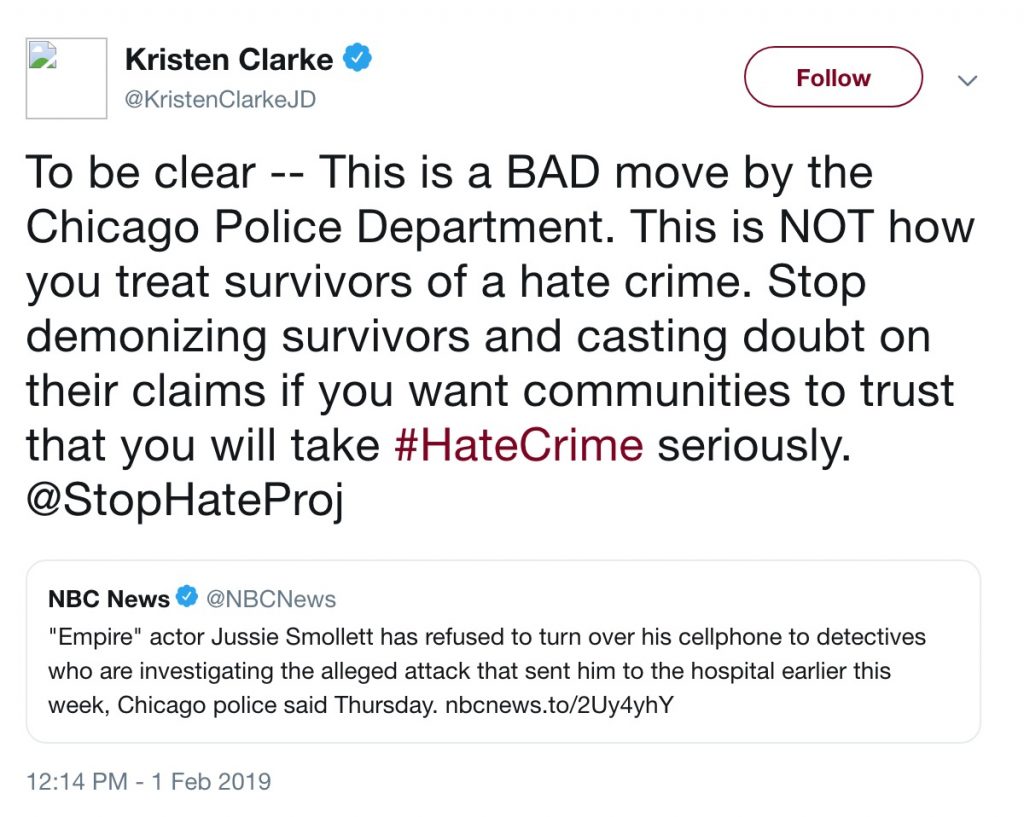 Well after Smollett’s hoax was exposed, Clarke suggested that race played a role in an Illinois state judge’s appointment of a special prosecutor to investigate Chicago district attorney Kim Foxx’s decision to drop charges against Smollett.

"Prosecutors use their discretion every day. But when a duly elected Black prosecutor, Kim Foxx, uses her discretion to move on from the Jussie Smollett matter, it’s a different story," she tweeted on Feb. 23, 2020. "A special prosecutor is brought in to undermine her power."

Lee quizzed Clarke during her confirmation hearing last month over her lobbying of the Obama Justice Department in 2009 to drop charges against two Black Panthers accused of intimidating voters outside a Philadelphia polling station. Clarke served as a director at the NAACP Legal Defense and Educational Fund when she reportedly contacted a Justice Department lawyer urging her to drop the case.

Clarke did not respond to a request for comment submitted through the Lawyers' Committee for Civil Rights Under Law, the group she leads.