President Donald Trump and Sen. Mitch McConnell (R., Ky.) have branded themselves "Back-to-Back Supreme Court Champs" for a new joint fundraising campaign they hope will boost the Republican Party’s ability to win in 2020.

The shirts, sold at SupremeCourtChamps.com, feature the faces of both Republican Party leaders along with names of their two biggest accomplishments since 2017: Neil Gorsuch and Brett Kavanaugh. Money raised will be split evenly between the 2020 reelection campaigns for Trump and McConnell.

"This t-shirt is great for Americans who want to keep winning and help President Trump and Republicans to victory in 2020," Murtaugh said. 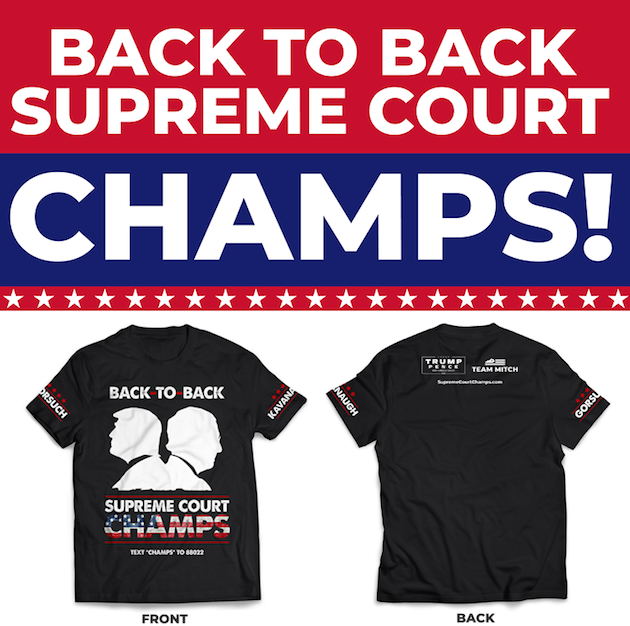 The collaboration between Trump and McConnell is the first joint merchandising campaign launched through WinRed, the fundraising engine party leadership hopes will eliminate the fundraising advantage the Democrats have held for years due to their embrace of ActBlue.

"A huge advantage of the Democrats' ActBlue donation platform has been joint or tandem fundraising that allows candidates to collaborate on fundraising initiatives and share the donations," explained Michael Duncan, a consultant for McConnell. "It allows campaigns to surf in the wake of other candidate's news cycles and add to the overall pot of donations—all in a unified platform with saved credit card information."

"Now Republicans have their own unified platform, WinRed, to compete with the left," Duncan said. "Coming out of the Twitter lockout, there's a ton of online momentum behind Senator McConnell's campaign. And thanks to the president's leadership on WinRed, when we recruit new donors with this t-shirt, we're benefitting the entire party's small dollar ecosystem."

WinRed saves payment information for donors, allowing for easy contributions to all other candidates using the platform. It’s modeled after ActBlue, the more than a decade old engine used by nearly all Democratic candidates.

Gerrit Lansing, WinRed’s president, told the Free Beacon he thinks merchandise campaigns like the "Back-to-Back Supreme Court Champs" shirts will be a big part of fundraising this cycle.

"The top campaigns right now use merchandise to create and drive news and revenue," Lansing said. "It’s the marriage of the press release and e-commerce, and it will be a major theme in the 2020 cycle."

He also said campaigns will be able to get items for sale simply by uploading a logo onto the site.

"WinRed is excited to enable this innovation by making it easy for anyone to just upload a logo and sell merchandise," Lansing said.

The shirts, a play on the popular "Back-to-Back World War Champs" shirts worn by many patriots, can be obtained by contributing at least $35 to the joint fundraising campaign. Contributions are automatically split between the two campaigns, but WinRed users can choose to allocate their money differently on the contribution page.