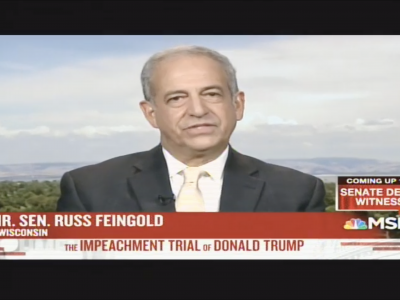 Former Dem Sen: Trump Acquittal Would Make Today 'One of the Worst Days' in History 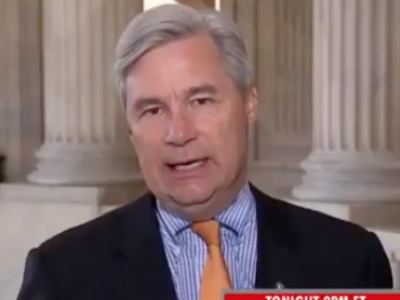 The Washington Free Beacon will not receive documents before the election that would show whether Russ Feingold violated federal law while working at the State Department.

Feingold, who is challenging Sen. Ron Johnson (R., Wis.) to reclaim the Senate seat he held for 18 years before losing to Johnson in 2010, has been accused of discussing his intent to run while working as a special envoy at the State Department between 2013 to 2015, in violation of federal law.

The Free Beacon filed a Freedom of Information Act request on September 12 seeking any and all correspondence between Feingold and Sen. Jon Tester (D., Mont.), the chairman of the Democratic Senatorial Campaign Committee, as well as Sens. Harry Reid (D., Nev.), Chuck Schumer (D., N.Y.), Tammy Baldwin (D., Wis.), and their offices. Correspondence with Mary Irvine and Cole Leystra, two of the former senator's long-time aides, was also requested.

The original request was granted. Expedition of the request was initially denied, but was ultimately granted following a Free Beacon appeal stressing the news value of the information in light of the November 8 election.

The State Department's FOIA office acknowledged to the Free Beacon on Thursday that it had not begun processing the FOIA request despite allegedly being assigned to an analyst soon after the FOIA request was submitted.

The State Department announced in early September that it would not release documents pertaining to a separate, 21-month-old FOIA request on Feingold until one month after the election.

Feingold has denied he violated the law, saying in an interview on September 9 that he knew State Department rules and did not run afoul of them while working there.

"In March of 2015, I left and I started talking to people," Feingold continued. 'I had to make sure people wanted me to run. It wasn’t enough that I was thinking about doing it. So I followed the law completely, and frankly, this is a completely false attack by somebody who's so afraid of losing his position as a politician that he’s just making stuff up. And it’s sad."

News reports contradict Feingold's claim that he had waited until he left his position to discuss his political plans.

The Hill reported that Tester spoke with Feingold about challenging Johnson in January 2015, when Feingold was still a special envoy.

Additionally, the Huffington Post reported that Feingold spoke to Baldwin, Milwaukee Mayor Tom Barrett, Rep. Mark Pacon (D., Wisc.), and other politicians about a potential run while at the department.

Feingold's campaign did not return a request for comment.

Former Dem Sen: Trump Acquittal Would Make Today 'One of the Worst Days' in History