Disgraced Democratic senator Al Franken was spotted on Wednesday mingling with top Democratic Party donors in Washington, D.C.—just two months after a ninth woman emerged to accuse the comedian turned lawmaker of sexual harassment and two years after Democratic donors took steps to prevent sexual harassment in their own ranks.

While Franken appears to have no formal role in the Democracy Alliance's three-day program, which featured current lawmakers and professional activists, the Free Beacon spotted him glad-handing with members of the exclusive group over cocktails. The former Minnesota senator, who has been on a rehabilitation tour since his resignation early last year, is set to host a SiriusXM radio show and told the New Yorker in July that he regretted his decision to step down.

Franken's appearance among the left's top donors suggests he is still warmly regarded by party leaders and activists who have themselves taken steps to condemn and prevent sexual harassment in the wake of the #MeToo movement.

A document obtained by the Free Beacon shows the Democracy Alliance's board of directors moved on Nov. 15, 2017, to create new program participation guidelines urging participants not to "subject others to unwanted sexual advances, coercion or bullying of a sexual nature."

Democracy Alliance president Gara LaMarche told the Free Beacon that many people attended the event's opening reception on Wednesday who were not invited to the remainder of the conference, but did not respond to a request for comment about Franken specifically.

"We generally do not comment on who comes to the conference or doesn’t, but we held a big opening reception to which many organizational and political leaders were invited, and a number of folks came to that who are not otherwise invited or part of the conference program," LaMarche said in an email. Franken did not respond to a request for comment.

His appearance in Washington comes just six weeks after a ninth woman, who identified herself only as a former Democratic congressional staffer, came forward to accuse Franken of unwanted groping.

The woman, a former aide to Sen. Patty Murray (D., Wash.), said that she was working the photo line at an event where Franken was the featured speaker. While she was taking a photograph with Franken, she told New York magazine, "he puts his hand on my ass. He’s telling the photographer, ‘Take another one. I think I blinked. Take another one.’ And I’m just frozen. It’s so violating. And then he gives me a little squeeze on my buttock, and I am bright red. I don’t say anything at the time, but I felt deeply, deeply uncomfortable."

Democracy Alliance's guidelines have been printed for attendees at each of the group's meetings since late 2017 and are included in the agenda for the ongoing conference, which is taking place at the five-star Mandarin Oriental hotel in Washington ,D.C. 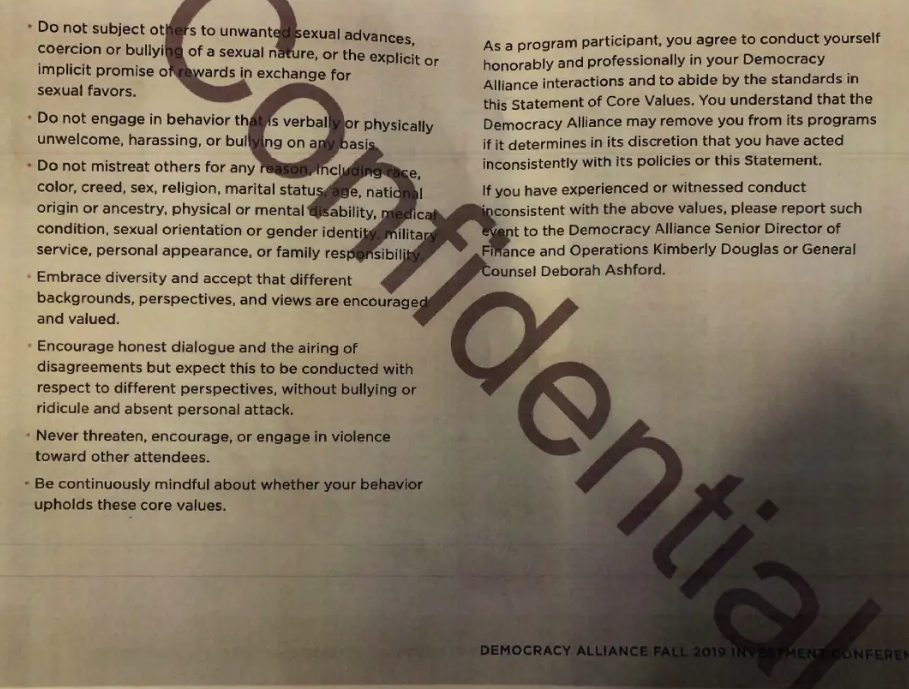