If you’re going to use the North Koreans as an existential threat to America, as the entertainment industry seems intent on doing, Olympus Has Fallen provides a blueprint on how to do so.

After a brief introduction to Olympus Has Fallen’s protagonist—disgraced Secret Service agent Mike Banning (Gerard Butler), who failed to save the wife (Ashley Judd) of President Benjamin Asher (Aaron Eckhart) during a car accident—director Antoine Fuqua treats audiences to a gripping and modestly realistic assault on our nation’s capital that ends (spoiler alert!) in the titular Olympus (the Secret Service codename for the White House) falling to a band of North Korean terrorists.

I say the assault is "modestly realistic" because the North Koreans seem to have magically obtained American technology such as AC-130 Gunships and highly experimental (read: nonexistent) aircraft defense systems. Even so, a modestly realistic assault on Washington, D.C., trumps a wholly unrealistic invasion of the United States by North Korea, as posited by last year’s Red Dawn and 2011’s Homefront.

As the gunship wreaks havoc on the National Mall and eliminates much of the Secret Service and military protection at the White House, a small team of North Korean commandos storms the front portico. Displaying SEAL-like skills, a few dozen invaders overpower the remaining defenders, lockdown the White House, and move into the nuclear bunker, with President Asher in tow.

As pure action-packed spectacle, Olympus Has Fallen’s big open has few recent peers. Indeed, one could argue that in terms of sheer power it trumps The Avengers’ final battle: The stakes seem higher, and the individual sequences build to a satisfying conclusion more coherently.

Unfortunately, the rest of the film does not live up to the intensity of Olympus’ opening act. Banning, the lone Secret Service agent in the White House, embarks on a John McClane-style adventure, taking out North Koreans one at a time as he tries to rescue the First Kid, save the president, and recapture control of the building. 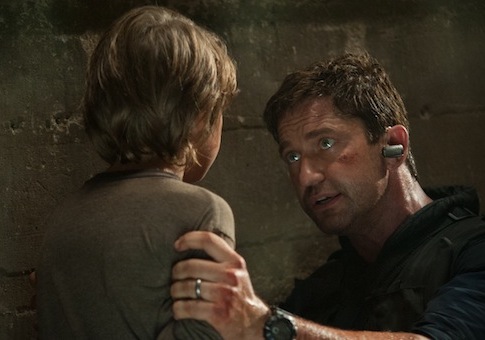 That is all well and good. Where things take a turn for the absurd, however, is the twist in the North Korean plan. It turns out that terrorist Kang (Rick Yune) not only wants an American withdrawal from South Korea but also wants to crack the codes for Cerberus, a program accessible only from the White House bunker that can destroy American nuclear missiles midflight—but only when the president and two other senior officials enter their codes. Speaker of the House Trumbull (Morgan Freeman) believes the Nork terrorists are interested in Cerberus because it will allow them to blow up any retaliatory nuclear strikes on North Korea, thus leaving the United States vulnerable to a first strike from Pyongyang. 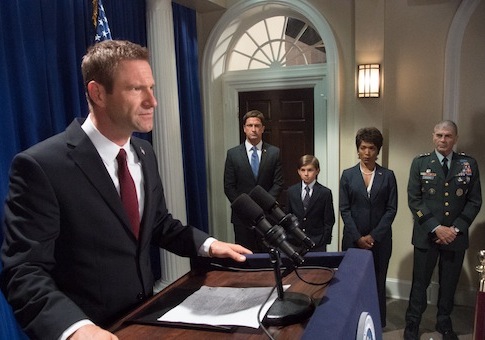 There is so much stupidity surrounding the fictional missile destruction system that it’s hard to know where, exactly, to begin criticizing. To choose just one example: When Kang is torturing the secretary of defense to get her password—which, naturally, doesn’t reset in case officials are incapacitated—Asher orders her to give up the intel to save her life.

But if the president is unwilling to let this loyal staff member die, why don’t the North Koreans just torture her until he gives up the codes?

It gets worse from there. One almost suspects Fuqua has concocted the elaborate silliness of Cerberus to show the need for a missile defense system: Leaving ourselves vulnerable to a first strike and hoping on the deterrent of MAD is an act of foolishness.

Nor is that the only reactionary element in the film. In addition to treating the North Korean threat as a legitimate one that will not abide containment and endorsing "harsh interrogation" techniques even CIA black sites would blanche at using, the movie also shows a White House betrayed by a rogue retired Secret Service who spouts Occupy Wall Street rhetoric.

Butler is perfect for the role of the tough-talking, neck-snapping hero. He exudes physicality and communicates in little more than grunts and curse words. Freeman does his best, though he has little to work with. And Yune, while saddled with an accent that never quite works, imparts a fair amount of menace as mysterious terrorist Kang.