The New York Times opinion page posted a series of tweets on Wednesday encouraging readers to call their senators and voice opposition to the Republican tax bill.

The Twitter profile's bio indicated that the Times editorial board had taken over the "NYT Opinion" account.

"The NYT Editorial Board is temporarily taking over this acct. to urge the Senate to reject a tax bill that hurts the middle class and the nation's fiscal health," the updated bio reads. 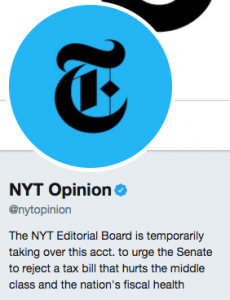 The board also tweeted the disclaimer in case anybody missed it.

This morning, The New York Times Editorial Board is tweeting here to urge the Senate to reject a tax bill that hurts the middle class & the nation's fiscal health. #thetaxbillhurts https://t.co/vHKm33Fq2i

The Times campaign includes the phone numbers of influential senators who readers are told to call in order to save the Obamacare individual mandate, and includes over a dozen tweets using the hashtag, "#TheTaxBillHurts."

Don't let Trump's tweets of Islamophobic conspiracy theories distract you. Call your senator and tell him or her that #thetaxbillhurts. Find contact information here: https://t.co/j05FMu1Nlb pic.twitter.com/MU00e3mdLK

Contact @LisaMurkowski, (202) 224-6665, particularly if you live in Alaska, to say she should oppose the Senate tax bill because it would drive up the cost of health insurance by repealing Obamacare's individual mandate. #thetaxbillhurts pic.twitter.com/vL9y3zAaF6

The editorial board argued readers should oppose the GOP plan because it said the plan puts blue states at a disadvantage and favors wealthy Americans.

Who pays the estate tax? Only the top 0.2% of estates, which are worth more than $5.49 million for individuals and $10.98 million for couples. The rest of us will pay more so they can get a break. #thetaxbillhurts

The account also shared the editorial board's column from Wednesday where the board further shared its opposition to the Republican plan.

Here is today’s editorial: GOP senators can follow the will of their donors & vote to take money from the middle class and give it to the wealthiest people in the world. Or they can vote no, to protect the public. #thetaxbillhurtshttps://t.co/bHYJcMTMjU

The Times has endorsed the Democratic candidate for president every year since 1960.