Update 4:53 p.m.: Matt Harvey deleted his Instagram post shortly after this article was published. The Washington Free Beacon captured an image of the post before it was deleted.

The PGA may have succumbed to pressure and moved its Grand Slam of Golf event from a golf course owned by Republican presidential candidate Donald Trump, but the decision has not kept all professional athletes off his golf courses.

Superstar New York Mets pitcher Matt Harvey and some of his teammates were thankful that Trump got them a round on the just-opened Trump Golf Links at Ferry Point in the Bronx for their off-day Thursday.

"Off day with some TEAMMATES! Thanks @realdonaldtrump @donaldjtrumpjr @trumpferrypoint for a great day on the new course!!!" wrote Harvey on Instagram. 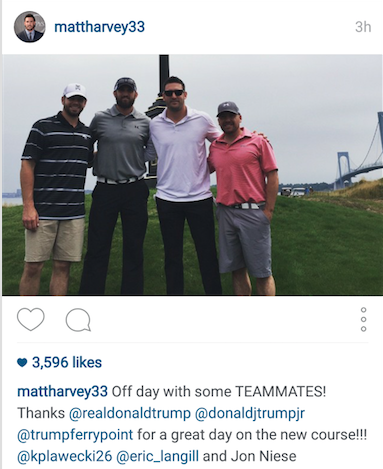 Joining Harvey for the round were teammates Kevin Plawecki, Jon Niese, and bullpen catcher Eric Langill.

In recent weeks, companies in the sporting world such as ESPN and NASCAR have also decided to dissociate from Trump by moving events from his golf courses. The ESPY Celebrity Golf Classic was scheduled to take place at Trump National Golf Club and NASCAR was going to hold an award ceremony at Trump National Doral Miami.

Trump doesn’t seem fazed by the decisions made by ESPN and NASCAR and said it works out great for him from a business perspective.

"I will keep [NASCAR's] very substantial deposit and rent the ballroom to somebody else that night," said Trump.

In the case of ESPN, Trump said he will be keeping their deposit and likely make more money from the green fees he can charge by keeping the course open.